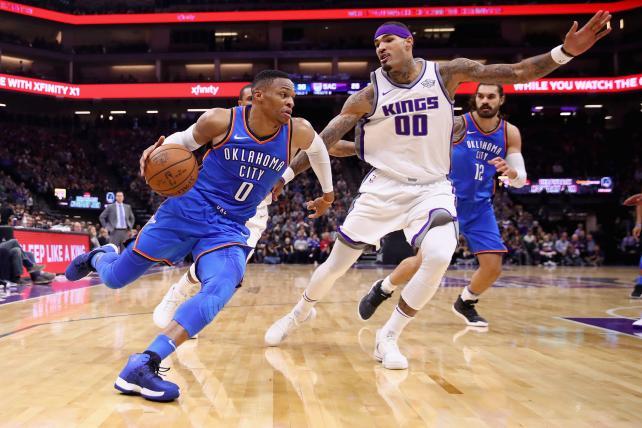 Russell Westbrook of the Oklahoma City Thunder drives on George Hill and Willie Cauley-Stein of the Sacramento Kings at Golden 1 Center on November 7 in Sacramento.
Credit: Ezra Shaw/Getty Images

As the NFL weathers another season of ratings declines, TV's No. 2 sports league is enjoying year-over-year lifts with fans in the demographic most coveted by advertisers.

According to Nielsen live-plus-same-day data, National Basketball Association telecasts on ESPN and TNT together are currently averaging 2 million viewers per game, up 15 percent compared to the year-ago draw of 1.74 million. Season-to-date, pro hoops coverage on the two cable networks is averaging a 0.9 rating in the target demo, which works out to around 1.16 million adults 18-49. That marks a 29 percent improvement compared to the 0.7 rating, or 902,300 adults 18-49, that ESPN and TNT were serving up a year ago.

Of the two NBA media partners, ESPN is showing the greatest year-over-year increases. Through its first 20 games, ESPN's NBA coverage is averaging 1.84 million viewers, up 18 percent versus the 1.56 million viewers it scared up last fall. More to the point, ESPN's NBA telecasts are up 33 percent in the demo, with an average draw a little north of 1 million adults 18-49, or a 0.8 rating.

ESPN and TNT collectively pay the NBA some $2.7 billion per year for the rights to carry the games.

Among the brands that are the most ardent backers of the NBA are Taco Bell, PlayStation, Burger King, Jim Beam and offical NBA sponsors State Farm and American Express. Since the season tipped off on Oct. 17, the aforementioned marketers combined have invested an estimated $25 million in ESPN and TNT's in-game NBA coverage.

Ratings (and ad spending) really starts to spike once the playoffs roll around. Last season's five-game Cavs-Warriors Finals averaged 20.4 million viewers and a 7.4 in the demographic, making it the most-watched NBA championship series in 19 years. ABC, ESPN and TNT generated north of $900 million in ad sales revenue over the course of the 79-game postseason showcase.

Advertisers are particularly drawn to the NBA's affluent, apple-cheeked fan base. According to Magna research, the average age of NBA viewers is a sprightly 42 years old, which is considerably younger than the crowd that tunes in for the NFL (50) and Major League Baseball (57).