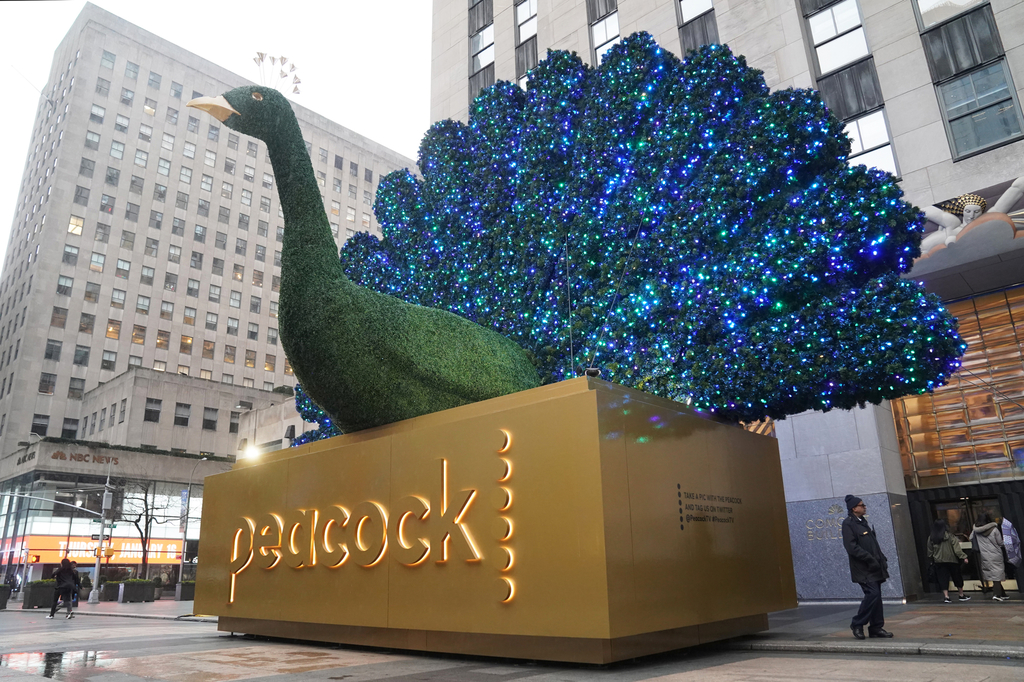 Peacock will incorporate several ad models that NBC has been testing over the past few years.

NBC Universal unveiled ad plans for its Peacock streaming service, along with the first batch of sponsors, on Thursday afternoon during its investor day.

State Farm, Target, Unilever, Eli Lilly and Apartments.com have signed on as launch partners to the platform, which will debut on April 15 to Comcast subscribers, and be free to consumers. It will roll out nationally on July 15. The company said it will bring in "hundreds of millions of dollars" in initial advertising and expects to reach between 30 million and 35 million active accounts by 2024.

Peacock will have five minutes or less of commercial time per hour. For comparison, Hulu has said it runs about half the ad load of traditional TV, which would be somewhere between seven and eight minutes of commercials per hour.

There are also frequency caps in place so people will not see the same ad more than once every half hour.

Peacock will incorporate several ad models that NBC has been testing over the past few years, including ShoppableTV, which allows viewers to buy items directly from shows they are watching; and prime pods, or 60-second ad breaks.

There are also pause ads, which deliver a brand message when a viewer takes a break from viewing. During a pause, there’s also the opportunity to deliver contextually relevant content that relates to what the viewer is watching, with an option to take an action, like receiving a coupon to their phone. And, there are also binge ads, where viewers who watch three episodes of a show in a row will will receive an ad-free episode from a sponsor.

These are two of the formats that Hulu has also been experimenting with over the past several months. Meanwhile, AT&T's Xandr announced the debut of pause ads last week at CES.

Peacock will also feature engagement ads that are interactive, personalized experiences, like trivia questions or product galleries; trending ads that run alongside the day’s most topical content; and exclusive sponsorships of shows that will include just one ad in an episode.

Peacock’s editorial team will curate a collection of titles based on moods, genres, events and other themes so that brands can air contextually relevant messaging. And Comcast’s Xfinity voice technology is integrated into Peacock, which will allow audiences to use their voice to interact with a brand, following on-screen prompts to speak into their remote to receive an exclusive offer.

As Ad Age previously reported in November, NBC had been out in the marketplace looking for about 10 or so advertisers for the launch of Peacock, asking as much as $25 million for packages, according to people familiar with NBC's initial pitch. More advertisers are expected to be announced ahead of the launch.

These packages include being part of Peacock’s “streaming council,” which will help build, test and learn what types of ads and models resonate with audiences.

"We're offering brands a much-deserved seat at the table, next to our engineers, creators, and executives, and launching a council that will be tasked with not only improving the viewer experience on Peacock, but setting the standard for the streaming landscape as a whole," Laura Molen, president, advertising sales and partnerships, NBCU, said in a statement.

It will also include having access to NBCU’s talent and creative capabilities and being integrated into the marketing of Peacock and the 2020 Tokyo Olympics.

The sponsorship deal is a quid-pro-quo of sorts. Sponsors will also promote Peacock on their sites, in their stores, across their showrooms and in their media.

Peacock will offer the free, ad-supported tier, along with a premium tier that will cost $4.99 per month (it is free for Comcast subscribers). The free tier will include next-day access to current seasons of freshman broadcast series, complete classic series, popular movies, curated daily news and sports programming, including the Olympics, Spanish-language content, select episodes of marquee Peacock originals and tent-pole series, as well as curated Peacock streaming genre channels, such as “SNL Vault,” “Family Movie Night” and “Olympic Profiles.”

The premium tier, which will also include ads, will additionally offer full seasons of Peacock originals and tent-pole series, next-day access to current seasons of returning broadcast series, early access to late-night talk shows, and additional sports—such as the Premier League—totaling more than 15,000 hours of content.

Premium customers can upgrade to an ad-free experience for an additional $5 per month. This would make the total, ad-free tier $9.99 for non-Comcast subscribers.

Peacock's content will include "Law and Order" and the "Chicago" franchise. "The Tonight Show with Jimmy Fallon" and "Late Night with Seth Meyers" will stream early on Peacock each day. There will also be live, exclusive content during the Olympics.

Updated with the names of two additional sponsors.