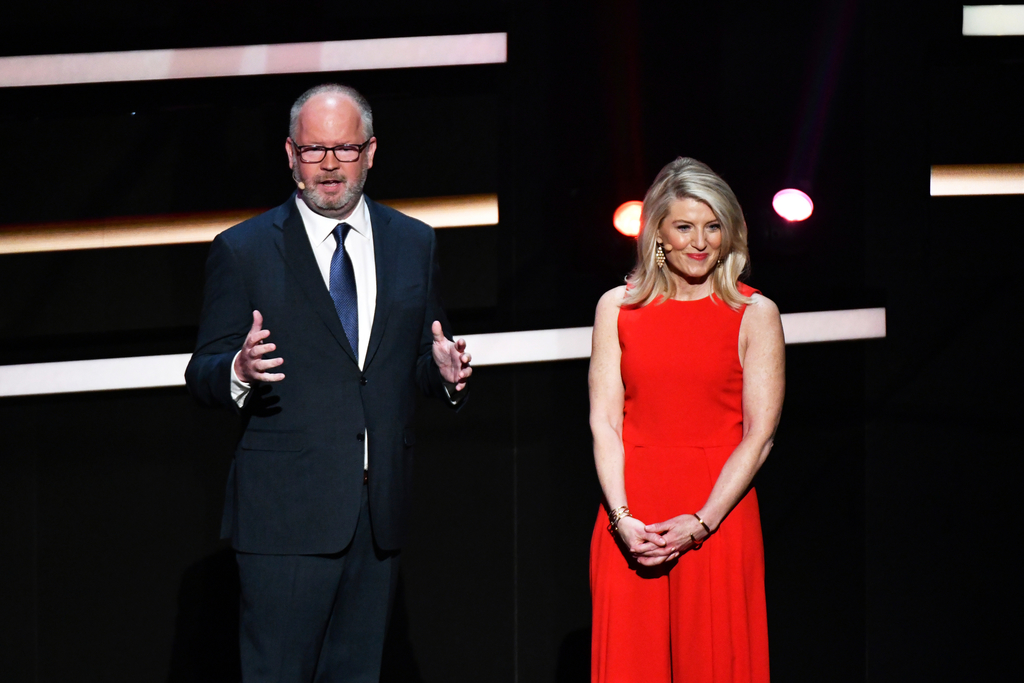 NBCUniversal's Mark Marshall and Laura Molen at the network's 2019 upfront in New York.

NBCUniversal on Thursday took a radical step toward bringing more accountability to the upfront bazaar, silencing the unverifiable bluster that has long been the lingua franca of TV’s annual selloff in favor of a rather precise accounting with the Securities and Exchange Commission. In so doing, the media giant has provided investors with what may well prove to be the most forthright assessment of the state of the television marketplace.

As part of parent company Comcast’s second-quarter earnings statement, NBCU disclosed the dollar volume and rate-of-change for its recently completed upfront business, which the company said amounted to “nearly $7 billion” in advance advertising commitments. That marked a 10 percent increase compared to the year-ago quarter.

Setting aside all the money that’s coming in for the 2020 Summer Olympics, for which NBCU plans to book more than $1.2 billion in ad sales, the company’s dollar volume increased 3 percent year-over-year.

Comcast executives offered further detail during the company’s earnings call. “We had a record upfront,” said NBCUniversal CEO Steve Burke. “This year was particularly robust. Our [dollar] volume was up 10 percent, I think our average pricing [increase] was up close to 10 percent, maybe 9 percent, and NBC in primetime was up about 13.5 percent.”

While Burke did not disclose the amount of dollars advertisers have set aside to buy time on the broadcast flagship’s 2019-20 schedule, that 13.5 percent CPM hike was negotiated on the heels of a season that saw NBC’s primetime ratings fall 33 percent to a 1.4 in the C3 currency. That translates to a nightly crowd of around 1.8 million commercial-viewing adults 18-49. (The usual caveats about the principle of TV’s supply-and-demand marketplace apply.)

Unlike the organic ratings declines posted by its broadcast rivals, NBC’s losses were primarily a function of tougher-than-usual comps. During the 2017-18 campaign, NBC hosted Super Bowl LII and the PyeongChang Winter Games.

Burke, who said this summer’s dealmaking resulted in a “record upfront,” credited a strong economy and a spike in new client relationships. “The biggest category of advertising in our upfront was from digital-native companies: The FAANG companies [Facebook, Apple, Amazon, Netflix and Alphabet's Google], streaming businesses, businesses that basically exist on the internet,” Burke said. “Ironically, those are the businesses that are putting some pressure on our ratings. Well over a billion dollars this year came from digital-native companies that literally didn’t advertise four or five years ago.”

NBCU’s notable haul included $1.3 billion in spend on its digital platforms, Burke said, who added that the company’s first “all-screen” upfront offered marketers an opportunity to invest in the reach of traditional TV while enjoying the inherent benefits of splashing around in the data pool.

While broadcasters often book upfront commitments for as much as 80 percent of their primetime inventory, the particulars of the marketplace have never been accessible to anyone outside the Bermuda Triangle of buyers, sellers and marketers. A sort of uninformed voyeurism holds sway during the summer selloff, as people with no firsthand knowledge of the negotiations pass along uncorroborated, often wholly implausible information that is then dutifully regurgitated in the press. The password to get into the upfront speakeasy has always been “bullshit.” (But, hey, as long as the drinks are free.…)

Which is why today’s nod to transparency is of particular interest. This voluntary meander through the TSA body scanner that is Sarbanes-Oxley marks only the second time a broadcaster has submitted its upfront dealings for enshrinement in the official SEC record. Back in June 2005, ABC made a case for accountability with a similar gesture; if you’re keeping track at home, that’s two networks that have kicked the tires on transparency in the 57-year history of the upfronts. Progress!

While NBCU should be applauded for its decision to report its upfront business with the people who don’t look kindly on flimflammery and jibber jabber, the company still kept mum on a few particulars. For example, the Peacock didn’t exactly fling open the old CPM kimono; rather than offering a specific cost for reaching 1,000 NBC primetime viewers, Burke hewed to convention by expressing the increase as an ambiguous rate of change. And while it may be of some interest to note that NBC commanded a 13.5 percent rate hike, the absence of last year’s baseline rate leaves investors with a bit of a mystery on their hands.

If this year’s SEC disclosures were out of the ordinary, they were made in the wake of some big institutional changes at NBCU’s ad sales unit. Longtime capo Linda Yaccarino in October tapped co-presidents Laura Molen and Mark Marshall to handle day-to-day sales responsibilities, a move that for the first time put the two execs in charge of NBCU’s upfront negotiations. Yaccarino, who remains chairman of advertising and partnerships, has since shifted her focus to matters of overall strategy and tech development.

Now before anyone starts putting an addition on their third beach home, that $7 billion score first manifest itself into a pile of spendable dollars. Think of that sum as a placeholder, or a towering stack of layaway tickets. Even after NBCU has converted its holds to orders, the advertisers still have the option to modify or cancel outright percentage of their upfront buys in three of the four fiscal quarters. In other words, the upfront projections won’t start transforming into bank-vault-clogging dollars until the checks clear.

At any rate, NBCU’s wrangling is done for another year. (It joins CBS, the CW, Univision, WarnerMedia and Fox at the upfront afterparty.) And if there’s one thing of which we can be certain, it is that advertisers’ belief in traditional TV remains steadfast despite the attention-gobbling predations of Netflix, the DVR and, um, TikTok.

“The advertising market is very, very healthy,” Burke said. “That’s the reason why we’re still very optimistic about the future of broadcast and cable channels.”