NEW YORK (AdAge.com) -- Newspapers are edging away from demanding a fistful of coins at their vending machines and toward accepting plastic. 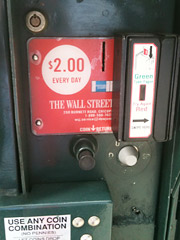 Credit-card and debit-card readers aren't typically improving sales much, as it turns out, but they might help the vending machines avoid irrelevance as newspapers hike cover prices and consumers swipe cards for more and more of their purchases.

Most recently The Wall Street Journal added credit- and debit-card readers to 190 vending machines in the New York area three months ago, partly to help the introduction of its Greater New York edition.

"It has just become normal, so we need to step up and make sure we can sell the newspapers in the way people want them," said Ian Jackson, VP for circulation at The Wall Street Journal and the New York Post, units of Rupert Murdoch's News Corp.

"Have you got eight quarters in your pocket right now?" he asked. "I rest my case."

Newspaper vending machines represent "considerably less" than 5% of the paper's single-copy sales, according to Mr. Jackson. But at a time when the Journal wanted to encourage sampling by people who don't normally read it, refusing service to anyone without $2 in change didn't seem smart.

The machines are being used more now than they had been before, according to Mr. Jackson, although there are many factors that influence single-copy sales.

Next the New York Post will try card readers at about 10 machines, but that paper's 50 cent cover price is less of a barrier than the Journal's two bucks. "There may well be areas where it works, but my best guess right now is it's not going to tear up trees," Mr. Jackson said.

And that may be the baseline for most papers -- card readers won't help sales, but only taking coins could still come to hurt.

Tribune Co. has been testing credit card sales for six months in Chicago, where five card-reading machines have generated sales that are "flat to slightly up," and for a more than a year in Orlando, where 21 card-accepting machines at the airport have not seen an increase in sales, according to a Tribune spokesman. Sales in the Orlando airport may have been depressed by the slowdown in tourist visits to the area, the spokesman said; the company is adding another five card-reading newspaper vending machines in Orlando but away from the airport over the next month.

The New York Times has been trying card readers on 10 vending machines for about a year without any significant lift to sales, a spokeswoman said. The paper is evaluating its entire vending operation and may purchase more of the card readers in the future, she said.

USA Today has had card readers on 60 machines at airports in Dallas-Fort Worth, Atlanta and Minneapolis for four or five years, but hasn't seen a sales lift it can attribute to the readers so it's not planning to expand their use, a spokesman said.