The Cowboys and Bears will stoke the NFL's playoff ratings fire

Offense may keep fans tuning in, but all eyes are on Big D this postseason
READ THIS NEXT
Rethinking TV attribution: The full-funnel approach 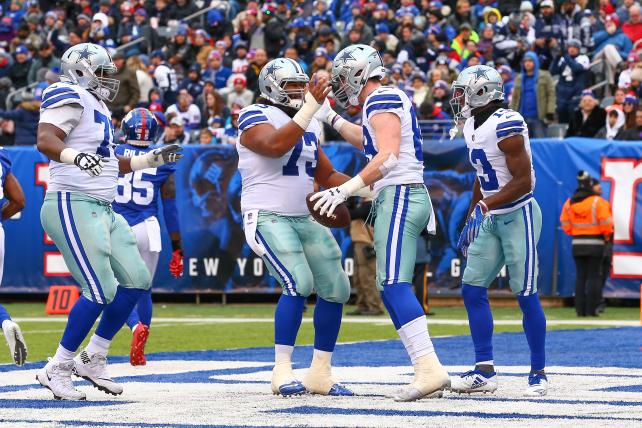 On the heels of a season in which an explosion of offensive production helped lift the NFL's TV ratings, the smart money says the playoffs will deliver a similar boost in ad impressions. And if the prospect of high-scoring, closely-matched games isn't sufficiently alluring, the return of two storied franchises to postseason play should go a long way toward goosing the league's Nielsen numbers.

Making their first playoff appearance since losing a heart-stopping Divisional Round showdown to Green Bay two years ago, the Dallas Cowboys will suit up tomorrow against Seattle in the NFC Wild Card round. It is impossible to overstate the impact a deep Dallas run will have on the TV deliveries; as the NFL's most indefatigable marketing construct, the Cowboys defy ambivalence in much the same way as do the New York Yankees and Los Angeles Lakers. Love 'em or loathe 'em, football fans are all but preconditioned to watch 'em.

The TV data backs this up. This season the Cowboys appeared in 11 nationally televised broadcast windows, and all that exposure paid off in yet another ratings win for Jerry Jones' charges. Dallas led all comers with an average delivery of 21.1 million viewers and an 11.7 household rating, topping a field that included the remarkably resurgent Chicago Bears and perennial draws New England, Green Bay and Pittsburgh.

The aforementioned Bears are another NFC team that is expected to bring more viewers into the playoff fold this year. In what will be their first playoff appearance since 2011, the representatives of the nation's third-largest media market will square off Sunday against defending Super Bowl champs Philadelphia. While opportunities for football enthusiasts to take in the spectacle of Chicago's ferocious defensive unit were limited, in their five national TV windows the Bears averaged 19.7 million viewers and a 10.7 rating. Those deliveries nearly doubled Chicago's year-ago average (10 million viewers, 6.0 rating) and sent the franchise rocketing from a lowly 27th-place finish in the 2017 ratings to the number two spot on the chart.

All told, the average national delivery for the 12 playoff teams was 16.5 million viewers, which marks a 21 percent increase from last season's 13.6 million viewers. And with those elevated regular-season stats comes a vast improvement in the amount of star power under center. A year ago, Wild Card viewers were staring down the barrel of a Tyrod Taylor-Blake Bortles quarterback showdown; this time around they can look forward to taking in a shootout between Andrew Luck and Deshaun Watson and an equally intriguing Philip Rivers-Lamar Jackson pairing. (The 21-year-old Jackson will make NFL history on Sunday afternoon as the youngest QB to ever start a playoff game.)

As we documented earlier in the season, the NFL's mania for scoring a whole bunch of points every Sunday seemed to contribute greatly to the reversal of the league's two-year ratings slide. According to Nielsen live-plus-same-data, all regional and national NFL broadcasts drew an average crowd of 15.8 million viewers and a 9.1 household rating, good for a 5 percent improvement versus a year-ago.

If pass-happy offensive schemes helped win back fantasy-oriented fans, degenerate gamblers and casual observers of all stripes, the playoff bracket suggests that the scoreboard and Nielsen panels will continue to light up like pinball machines in January. Eight of the NFL's top 10 scoring franchises have advanced to the postseason, an air force that includes Kansas City phenom Patrick Mahomes and his skull-clutching tally of 50 regular-season touchdown passes.

If Fox stands to benefit most from the current playoff picture—the network's NFC slate earns it dibs on all postseason games featuring the Cowboys, Bears, Saints, Rams, Eagles and Seahawks—CBS hasn't exactly been dealt a bad hand either. The Chiefs, arguably the most exciting team in the bracket, are 4/1 favorites to hoist the Lombardi Trophy on Feb. 3.

An AFC Championship Game duel pitting Mahomes against aging legend Tom Brady and the Pats is CBS' best-case scenario before the world's attention alights on Atlanta. New England punched its ticket to Super Bowl LII in front of a national audience of 44.1 million viewers, and while that falls a bit shy of the 50 million-plus viewers who regularly tuned in for the classic Peyton Manning-Tom Brady battles of a few years ago, the increasing likelihood that any game may be TB12's last should only serve to further inflate CBS' numbers.

For all the NFC's demographic advantages, it's worth noting that CBS' AFC Championship Game coverage has bested Fox's presentation of the rival conference's title game for three straight years. All three games featured New England; of these, the most memorable was the 2016 AFC tilt, in which CBS served up a whopping 53.3 million viewers and a 29.3 rating. In what would be the final showdown between Brady and Manning, the Broncos vanquished the Pats 20-18 in the midst of a raging blizzard that had much of the East Coast snowed in and huddled in front of the tube.

The most-watched NFC Championship Game of all time? Spare a thought for the late Dwight Clark and "The Catch." Clark's indelible contribution to football lore closed out CBS' coverage of the 1982 NFC title matchup between the Cowboys and 49ers, a thriller that delivered 68.7 million viewers.

Even if this year's playoff ratings won't come within sniffing distance of those early '80s numbers, the bar to improve on the 2018 stats is reassuringly low. The average delivery for last season's 10 playoff broadcasts worked out to 30.9 million viewers, down 14 percent from the previous year's 36 million. The postseason broadcasts churned up a 17.2 household rating, down 12 percent from the 2017 average (19.6).