With NFL ratings on the rise, Donald Trump is denied a favorite punching bag | Ad Age
Skip to main content

With NFL ratings on the rise, Donald Trump is denied a favorite punching bag 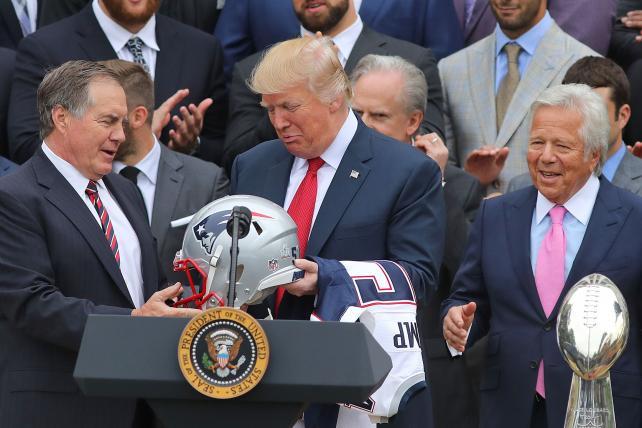 It's been nearly a month since Donald Trump last tweeted about the NFL, and while he generally doesn't allow facts to get in the way of his many personal and political beefs, the league's ratings bounce has made it all but impervious to the president's signature 280-character harangues.

Through the first four weeks of the 2018-19 season, the NFL is punting serious rump, putting together a string of Trump-silencing TV deliveries. In addition to sending the mercurial, ratings-obsessed POTUS into a sort of extended Twitter timeout—the last time Trump took a digital swipe at the league was on Sept. 9, when he blamed NBC's NFL Kickoff Game declines on the usual "anthem protest" canard—the league's ratings have calmed the nerves of advertisers who feared that football was losing its hold on the American imagination.

After two seasons of back-to-back declines, ratings for the 25 regional and national NFL TV windows on the books are up slightly compared to the year-ago period. According to Nielsen live-plus-same-day data, NFL broadcasts are averaging 15.8 million viewers, which marks a modest 1 percent improvement versus the analogous period in 2017, while household ratings are up 2 percent to a 9.2. (As a single rating point represents 1.2 million TV homes, that 9.2 figure translates to around 11 million households.)

If a 2 percent gain doesn't seem terribly noteworthy, it's worth putting that data point into perspective. A year ago at this time, NFL ratings were down 9 percent versus the first four weeks of the 2016 campaign—which, in turn, were down 14 percent compared to the 2015 numbers. In other words, the NFL is showing signs of rebounding from a two-year stretch in which it effectively lost nearly one-quarter of its early-autumn audience.

At this stage of the game, the ratings revival appears to have been sparked by good old-fashioned Sunday football. The late national window, which generally kicks off at around 4:20 p.m. ET and features big draws like the Dallas Cowboys, Green Bay Packers and New England Patriots, is currently up 2 percent, averaging 21.8 million viewers and a 12.4 household rating. (Again with the context: Those four Sunday afternoon broadcasts dwarfed the turnout for this year's NBA Finals, which averaged 17.5 million viewers and a 10.0 rating.)

As has been the case for the last nine seasons, Fox's national Sunday window (a.k.a. "America's Game of the Week") is the biggest draw on the tube. Through its first pair of broadcasts, Fox is averaging 22.8 million viewers and a 12.9 rating, topping CBS's national showcase (20.9 million/12.1) and NBC's primetime blockbuster, "Sunday Night Football" (19.8 million/11.5). There isn't a scripted series that comes anywhere near those massive deliveries, which goes a long way toward explaining why these are the three most expensive buys on TV.

Thus far the biggest ratings gains are being carved out during the Sunday afternoon regional windows, when CBS and Fox split up a roster of 10 early games to air in designated markets. Season-to-date, the 1 p.m. ET broadcasts and a smattering of 4 p.m. regional games are averaging 14.9 million viewers and an 8.7 rating, up 4 percent compared to last year.

Much of ESPN's dip can be chalked up to a tough comp with the ratings it delivered in the first four weeks of the 2017 season. That initial stretch featured the NFC's representative of the nation's largest media market—the New York Giants serve a region stuffed with 7.1 million TV homes, which account for 6 percent of the overall television-viewing population—and the following week's game was hosted by Dallas, the NFL's biggest TV draw. As the love-'em-or-loathe-'em Cowboys aren't scheduled to appear on "Monday Night Football" until Week 9, ESPN is likely to remain the ratings outlier for some time.

On a network-by-network basis, CBS's Sunday NFL package is currently averaging 16.3 million viewers, up 8 percent from its year-ago 15.1 million average, while the "TNF"-bolstered Fox is up 5 percent to 17.4 million viewers. NBC's lone "Sunday Night Football" window is down 1 percent to 19.8 million.

If it's difficult to establish precisely why NFL ratings are on the upswing, the improvement in the on-field product seems like the logical place to begin speculating. Season-to-date, 19 games have been decided by a field goal or less, up from 14 in the year-ago period, and an explosion of offensive production has sent scoring through the roof. The NFL is on a torrid pace, as the first four weeks of play have yielded a record 344 touchdowns, thanks to the prolific arms of veteran quarterbacks like Drew Brees, Philip Rivers and Tom Brady and a constellation of emerging young signal callers like Patrick Mahomes and Jared Goff. If nothing else, the NFL is fun again.

As much as fans of defense-oriented football and the "three yards and a cloud of dust" ground game bemoan the NFL's insane scoring trend—rules designed to protect the quarterback have resulted in an unprecedented number of roughing-the-passer penalties, and there's a direct correlation between flags and scoring—the increase in offensive production helps draw in more casual viewers. The NFL's scoregasm economy also has been a boon to the nation's 40 million+ fantasy football enthusiasts, who are raking up hundreds of points each week in their virtual games. And while old school blood-and-guts football scolds may hate what's become of the sport, advertisers are well aware that casual fans and the fantasy crowd buy stuff too.

Should this early pattern hold sway throughout the season, network ad sales bosses will be gorging on the Wagyu steak at the Porter House all winter long. With ratings in the black, the networks presently aren't on the hook for any makegoods, which means they also have more inventory to sell in the lucrative scatter market. According to Standard Media Index estimates, makegoods (or ADUs, industry argot for "audience deficiency units") in 2017 accounted for 23 percent of all in-game NFL ad units. For the networks that carry NFL games, eliminating the cost of making advertisers "whole" is simply money in the bank.

Perhaps after the Kavanaugh confirmation circus has run its course and the myriad distractions of the midterm election have been knocked from the news cycle, President Trump will take a few exploratory pokes at his long-neglected nemesis. For the time being, however, the NFL isn't giving him any material to work with.