As Playoffs Loom, the NFL Tinkers With Its Ad-Break Structure | Ad Age
Skip to main content

As Playoffs Loom, the NFL Tinkers With Its Ad-Break Structure 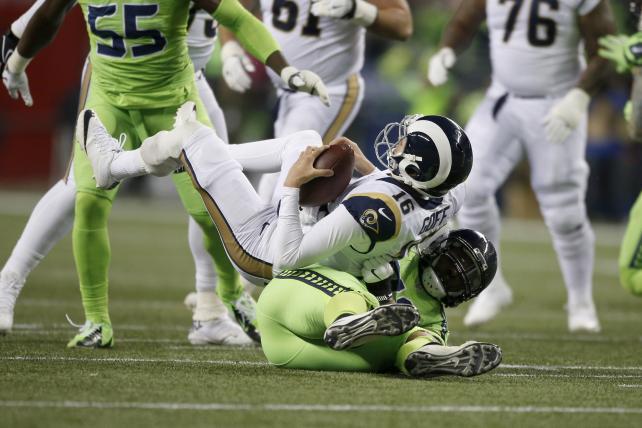 Quarterback Jared Goff of the Los Angeles Rams is brought down by the Seattle Seahawks at CenturyLink Field on Thursday in Seattle.
Credit: Otto Greule Jr/Getty Images

In a bid to gather fresh intelligence about audience retention as it relates to advertising breaks, the NFL and its network partners are about to kick the tires on an experiment that will change the frequency and duration of the in-game commercial pods.

According to people familiar with the plan, the one-week test will reduce the number of commercial breaks from the standard five per quarter to four, while retaining the usual spot load. In other words, while football fans will have fewer opportunities to make kitchen runs and bathroom breaks, the ad pods that do air will eat up more clock.

The league-wide trial goes into effect on Week 16, which coincides with the 12 scheduled Dec. 24 games as well as a pair of Christmas matchups. (The Ravens and Steelers look to Scrooge one another out of a playoff berth at 4:30 p.m. EST on NFL Network, and NBC wraps its eleventh season of "Sunday Night Football" with the Broncos and the Chiefs, two NFC East rivals that decidedly did not exchange Secret Santa gifts.)

ESPN's final "Monday Night Football" production of 2016 will also serve as a proving ground for the ad break probe. On Dec. 26, the Dallas Cowboys will appear in their twelfth national TV window of the season as they host the red-hot Detroit Lions.

News of the experiment was first broken by SportsBusiness Daily.

While details about the mechanics of the holiday experiment remain somewhat vague, sources said that the actual volume of total in-game ads would not change. The NFL isn't looking to take any Christmas goose off the networks' plates; rather, it hopes to use the pod test as a means to learn more about the relationship between break structure and the overall fan experience.

One seemingly obvious place to stage a pod extraction is during the infernal interval between a score and the subsequent exchange of possession. The whiplash touchdown-ad break-kickoff-ad break sequence has long been a source of frustration for fans, as it sacrifices the natural flow of the game on the altar of blaring, hyper-caffeinated commerce. Thirty seconds of football sandwiched between the game's fourth promo for the NFL Shop and the umpteenth airing of that interminable Apple holiday featuring Brad Garrett's warbling Frankenstein's monster is nobody's idea of a good time.

NFL officials last month said the league has been ruminating over ways to eliminate pockets of dead air from its broadcasts, both for viewers at home and fans in the stadium. While commercial messaging isn't the only target (the replay review process also is under scrutiny), the sense among NFL execs is that they have a fair amount of latitude to improve the overall commercial environment.

During his appearance at the Nov. 9 National Association of Broadcasters Show in New York, NFL exec VP of media Brian Rolapp said his team was looking to optimize the ad breaks. "An NFL game can have close to 70 commercial units in a game," Mr. Rolapp said. "Can we do that better? And it's not just [a matter of] … taking commercials out of the game to do something different, [but] do you actually spread out the commercial pods?"

That series of hypotheticals was reiterated earlier this week by NFL commissioner Roger Goodell, who returned to the commercial pod issue at the tail end of his Dec. 14 press conference. "We're evaluating every aspect of the game presentation," Mr. Goodell said. "[Can we] reduce the number of interruptions, including commercial interruptions? Can we change the pods in a way that would be … better from a fan standpoint? We're working with all that and we're collecting on that data. We're focusing on several initiatives we think can address those issues … and some of those we will experiment with this year."

Because the NFL schedule coincides with the holiday, Week 16 will feature an unusual number of national TV windows -- six instead of the standard four. In addition to the aforementioned Christmas and Boxing day broadcasts, Fox gets the Bucs and the Saints in the national 4:20 p.m. window, which has been pushed to Saturday afternoon. Later that same night, NFL Network hosts the Bengals and Texans. The only national window that will not be impacted by the trial is NBC's final "Thursday Night Football" matchup (Giants-Eagles, Dec. 22); the other five coast-to-coast broadcasts are expected to feature the remastered ad breaks, and then it will be business as usual again in Week 17.

Network sources reiterated that the temporary alteration of the standard in-game break structure would not reduce the overall volume of ads (or the associated revenue generated by those ads). That said, should the NFL ever try to make good on its earlier intimations that it may look to cut down on the number of commercials that air over the course of a full game, it's worth taking a long look at its own in-house promo allotment.

"If they want to shorten breaks, they could kill the 30-second league pieces," said one top-tier network executive. "'Play 60,' 'Football is Family,' etc. … All the spots fans see a million times."

That exec may be onto something. Season-to-date, across its five network partners, the NFL has aired some 865 on-air promos, making it the most frequent in-game advertiser. (Runner-up Verizon has aired 787 spots since the season kicked off in early September.) And that tally doesn't include its 342 ads for NFL Shop, 2,781 NFL Network promos or 81 teasers for NFL Fantasy Football. According to iSpot.tv estimates, when buys for all league-affiliated properties are bundled together, the NFL's in-game presence adds up to a staggering 4,069 airings at a value of approximately $129 million.

"Obviously, if they're looking to shorten the breaks, they could find a lot of time in their own inventory," the exec said. If nothing else, even a modest contraction of in-house promos would go a long way toward eliminating the logical paradox -- one that is, in all fairness, by no means unique to the league -- that arises when the NFL interrupts an NFL game in order to encourage the NFL fans who are watching that particular NFL game that it's great to be a fan of the NFL and its games.

However the ad structure experiment shakes out, it's also paradoxical to suggest that the volume of in-game commercials has had an outsized impact on this season's NFL ratings. If there's a perceived ad glut, it's because there's a game on three nights out of every seven, and that's on top of the seven-and-a-half hours of Sunday afternoon action. The average ad loads have been steady for the past several years, and the time of play is effectively flat versus a year ago, when the standard game clocked in at around three hours and 10 minutes. In a season disrupted to some extent by a number of prime-time blowouts, an unprecedentedly distracting election cycle and a perceptible diminishment of on-field star power, the near-constant that is advertising should be low on the list of culprits.

TV execs said the Week 16 fact-finding mission isn't expected to produce any immediate substantive changes in how the games are broadcast, but that the pod structure experiment should be a topic of lively debate during the off-season. In the meantime, only 10 national broadcast windows remain on the schedule before the first NFL Wild Card games kick off on Saturday, Jan. 7.