Upstarts Threaten Company's Hold on Ratings
READ THIS NEXT
‘America Must Change’: The story behind Time’s latest cover artwork

NEW YORK (AdAge.com) -- The wonky game of counting viewers has been a slow and steady one since 1950, the year Nielsen Media Research began to track who was watching all those brand-new TV sets. But now the longstanding leader in audience measurement finds itself in the midst of palpable drama. As consumers flock to video of all sorts in all places, can TV-ratings kingpin Nielsen maintain its dominance as the gold standard by which video advertising is priced?

The outlook is murky. A raft of upstarts are eager to win over Nielsen's clients, many of them offering marketers measurements based on audience behavior, not just reach and frequency.

Is anyone watching?
While there's some evidence that reaching enough people will result in recall and sales, marketers have always been expected to make a pretty big leap to be able to say conclusively: If X many people saw my ad, then Y many people will act on it. Now, marketers are looking for a way to measure just who in an audience saw and reacted to an ad, rather than just being told they had a chance to see it because the set was on at that time.

Consider that in 2007, Starcom USA and Discovery Networks struck a pact that made use of second-by-second audience data from media-research company TNS to guarantee viewers on the Discovery HD Theater channel. In 2006, NBC signed a deal with Toyota that required the network to use data from IAG Research to demonstrate its viewers paid attention and could recall particular details about a TV show.

And that's just the TV networks. Imagine, if you will, the demands bound to come as consumers start watching more content regularly on the web via mobile phones and MP3 players and whatever doodad Steve Jobs is sketching on a napkin somewhere. Nielsen "may do quite well despite the competition, but it isn't a slam dunk," said Bruce Benson, senior managing director-media and entertainment industry at FTI Consulting. "Their market position isn't as sure anymore. They have new competitors in a new adjacent space to the TV business."

Nielsen has already taken steps to reposition for the future. It purchased a company to help it analyze reams of set-top-box data buyers and advertisers say they want; it took over BuzzMetrics, which analyzes and tracks consumer-generated online media; and it acquired Telephia to get data from mobile devices. It also has taken steps to measure video-on-demand usage, is broadening its traditional TV panel and is starting to find ways to measure viewing across TV and the web.

Nielsen extends, defend itself
By extending into measurement of audiences of emerging media venues, and by lacing its reach-and-frequency expertise with some behavioral data, Nielsen believes it can maintain its authority, said Nielsen exec VP Susan Whiting.

"At a time of so much fragmentation and so much complication, you have all these options to measure the pieces, but in order to keep the answer as simple and efficient as possible for the advertiser, they want someone to tie it together. Imagine a world where you actually have to review 3,000 different answers," she said. "You don't want to do that as an advertiser or as an agency."

For every new field Nielsen tills, however, a competitor is already planting seeds?IAG, Rentrak and TNS to name a few.

"It would be my hope where we end up with more than one player, so that in the next wave of innovation, we don't run into the same hurdles we are having now," Tracey Scheppach, senior VP-video innovations director at Starcom USA. "It's hard for a monopoly to be the force of innovation." Another reason it's hard for Nielsen Media Research to move too quickly is that its largest chunk of revenue comes from the TV networks, which are understandably reluctant to cede ground in the audience wars. And some of them are out seeking their own ideas.

Seeking better mousetraps
"We've been looking in all kinds of places all around the world -- literally -- for methodologies and techniques that could be brought into the measurement process," said Alan Wurtzel, NBC Universal's president-research. While Nielsen has an infrastructure in place that many upstarts lack, he said, "The digital world has taught us that there can be a couple of guys in a garage somewhere that can topple mighty corporate entities, because some of it is just new ways of thinking and just figuring out a better mousetrap."

Rivals could emerge from several fronts. Hulu, the video-sharing site owned by NBC Universal and News Corp., could make it possible for TV networks to sell ads in ways that don't hinge on Nielsen TV ratings. And ad-agency holding companies such as WPP Group may prove capable of marshaling assets such as Kantar and Millward Brown, its media-services giant Group M and its holdings in targeted ad-serving technologies such as Visible World to create measurement services. Then there's Experian Group, which owns market-research firm Simmons and web-tracking firm Hitwise.

Nielsen's success in the future hinges on "the degree to which they can be a kind of single-source metric," said Jason Maltby, president and co-executive director of broadcast at MindShare, particularly as consumers continue to fragment around topic- or demographic-based media. "The challenge ... is that there's more data out there that they don't control, and people are getting smarter about how to access it."

These days, the quest is for consumer-behavior data from set-top boxes. As Ms. Scheppach noted, monitoring audiences as they click through TV channels "allows us to have greater accountability and do things like measure for the first time beyond age and gender."

Costly for cable providers
At least that's the end goal. "You will hear lots of people tell you it's easy," said Joan Gillman, president of the media-sales division at Time Warner Cable. But cable operators would have to bear a significant cost to extract the data, standardize it for use and store it. They would rather talk to media buyers and researchers about what sorts of data they want before investing lots of money to harvest them regularly, she said.

This could work in Nielsen's favor. The company in February purchased Audience Analytics to help process just this sort of information, and has worked with interactive data for many years, Ms. Whiting said. "It's not just about what's possible. It's also about what's practical."

How Nielsen Measures Up 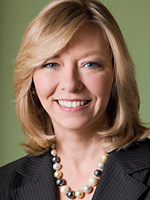 Susan D. Whiting
Credit:
Barbara Alper
While consumers may celebrate having so many media choices, media companies are less enthusiastic. Now they have to figure out ways to measure those audiences for advertisers, who want concrete data about who their ads reach and how those people react. Susan D. Whiting, the Nielsen exec VP who oversees development and sales, talked to Ad Age about the company's challenges.

Ad Age: We are seeing more deals where marketers are employing measurement systems other than Nielsen. These aren't necessarily based on reach or measuring mass numbers, but they get into brand recall or viewer behavior. Do they suggest that you need to branch out into other sorts of measurement?

Ms. Whiting: We started by announcing that 'Anytime, Anywhere' media-measurement strategy about a year and a half ago, and everything you raise is part of what we talked about in that strategy -- going beyond the measure of the reach and frequency ... looking at engagement. That's really important to advertisers, and so there are all different ways to do that. People are looking at everything from brain-wave research ... to recall to online surveys. A lot of different companies will be doing that. Clients will be asking for those qualitative measures on top of quantitative.

Ad Age: Nielsen has bought companies such as Telephia to help it measure mobile viewing and is branching out to measure internet watching. But executives industrywide can't see a time in the near future when a system for measuring cross-media views will come into play. When do you think this quest will be completed, and does Nielsen suffer as the process drags out?

Ms. Whiting: Part of what we heard from our clients -- and that includes advertisers and the media folks and the agencies -- when we put our strategy out was we don't know how quickly these markets are going to grow. We need directional information to decide how to invest and how to plan, so give us that broad directional information, and then we'll all decide how deep the measurement needs to go. In the meantime, we've been working on the TV and internet pieces first, and then we'll add the mobile.

Ad Age: Do you feel your panel-based methodology will last in an era when more people are asking for more-granular data, such as set-top-box information?

Ms. Whiting:I think both a broader census measure and a panel-based measurement technique will coexist. ... You can select the right panel to get a longitudinal measure of behavior, but you are complementing that and connecting that to very deep databases, whether it be ... web measuring or source sales data or anything else.