Olbermann Lands at Current, but Can He Grow? | Ad Age
Skip to main content

Olbermann Lands at Current, but Can He Grow?

Outspoken Personality Has High Hopes, but Indie Cable Has Challenges
READ THIS NEXT
TV giants see glimmers of hope for the ad market

NEW YORK (AdAge.com) -- Keith Olbermann is getting small in hopes of getting big. 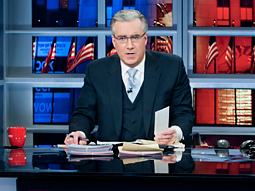 The outspoken TV host, fresh from exiting NBC Universal's MSNBC, today said he would join Current, the independent cable outlet backed by Al Gore. He will be the channel's "chief news officer," receiving an equity stake in the cable network for his trouble. As part of the pact, Mr. Olbermann will also, of course, begin hosting a five-nights-a-week news show in prime time starting this spring. He will also supervise other journalism-related programming on Current.

In a conference call today, Mr. Olbermann sounded ebullient, as he and other Current executives noted that the network presently reaches 60 million homes in the U.S. -- slightly more than MSNBC did when Mr. Olbermann started hosting a program there in 2003. "We're ahead in the process now," said Mr. Olbermann, suggesting that his efforts at Current would provide a ratings boost similar to the improvement his "Countdown" program engendered at MSNBC.

The newscaster has good instincts, but repeating his success this way may be more of a challenge. It's one thing to work for a cable network such as MSNBC -- owned by a giant media company that can push for distribution and retransmission fees by dint of operating a broad portfolio of media networks. It's quite another thing to work for an independent media outlet that has significantly less heft at the bargaining table.

For all its good intentions and quality-ownership pedigree, Current is no Time Warner, NBC Universal, Scripps or Viacom.

Indeed, the Hallmark cable channel -- whose owner, Crown Media, also lacks the clout that a broad portfolio of properties would bring -- has faced telling challenges in recent months. After trying to buoy its programming lineup with Martha Stewart content, Hallmark separately saw its programming yanked from AT&T U-verse lineups, the result of not being able to come to an agreement over the fees AT&T ought to pay for both Hallmark Channel and Hallmark Movie Channel.

Mr. Olbermann's arrival at Current is still an important development for the network. Cable outlets gain success through advertising sales, but also through the programming fees they can charge their distributors. Having a name-brand such as Mr. Olbermann on board could give Current more leverage in such negotiations, just as TBS's ability to snag late-night host Conan O' Brien or Discovery Communications' transformation of Discovery Health into the Opran Winfrey Network might.

"We believe at Current that every citizen has the freedom of speech and that freedom of speech includes the ability to donate to the candidate of your choice," Mr. Gore said. "As a news and information organization, we also believe that full disclosure of that is important to inform the viewers."

Mr. Olbermann is expected to resume his weeknight broadcast duties in prime time later this spring, executives said, with a show he vowed would represent an "amplified and stronger version of the show I just did at my previous network."

Mr. Olbermann declined to respond to a question asking about whether his exit from MSNBC came with any sort of "non-compete" agreement that would keep him off the air for a specific period of time.