Once Distributed Newspapers in 17 Markets

The Onion is halting its print version in Chicago and its two other remaining markets with its Dec. 12 issue. The newsweekly was 25 years old and is survived by its website and a new creative service for advertisers. 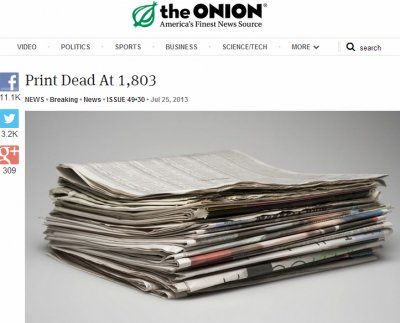 An Onion report from this summer

"It's sad to see a print edition no longer exist, but it's important to see the Onion succeed," said Mike McAvoy, president of Chicago-based Onion Inc., said.

The satiric newspaper, available at its peak in 17 markets, is now given away in just three cities: Chicago, Milwaukee and Providence, R.I. It is known for headlines such as "Giant burrito to solve all of area man's problems for six precious minutes." and "New documentary reveals SeaWorld forced orca whales to perform nude." (It also "covers" the ad business, with headlines including "Pepsi to Cease Advertising" and "General Mills Gives Honey Nut Cheerios Bee Intense Backstory Of Childhood Foster Home Abuse In Bizarre Rebranding Effort.")

Over the past several years the company has been disappearing from newsstands steadily as advertising shrank. Its most recent edition in Chicago, for instance, was just 16 pages and included only two full-page ads, both for Camel cigarettes.

While dropping out of some cities entirely, such as Denver, Minneapolis and Austin, Tex., the Onion outsourced printing, distribution and ad sales in others. In Chicago, Tribune Co. took over those duties in 2010.

Those last print pacts will end now as the company concentrates on creating its own brand of satirical content, including video, for the web and for new advertising and corporate clients it has been attracting. For instance, the Onion recently was commissioned to produce a series of men's fashion videos for shoe retailer DSW Inc.

The Onion moved its editorial staff from New York to Chicago last year, consolidating its workforce at the headquarters. The headquarters was established in River North in 2007.

The Onion began in Madison, Wis., in 1988, started by two juniors at the University of Wisconsin. It expanded to Milwaukee in 1994 and introduced its mock-news site in 1996. In addition to publishing its weekly, it published several best-selling books based on its newspaper stories. It quit publishing in Madison last July.

~~~
Lynne Marek is a senior reporter at Crain's Chicago Business.

Lynne Marek
View all articles by this author