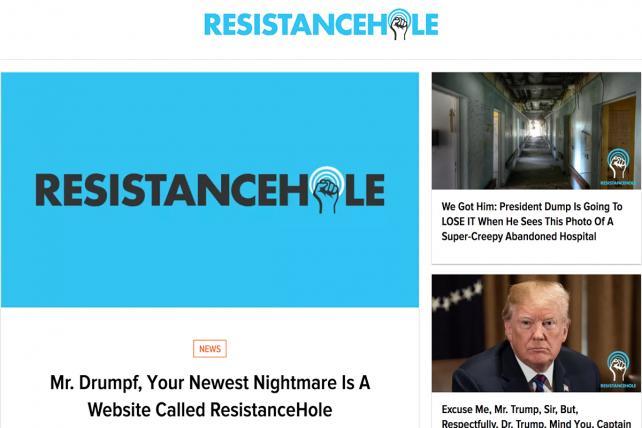 A new vertical from ClickHole (a spin-off of The Onion that arrived in 2014 to parody the likes of BuzzFeed), ResistanceHole follows the 2017 launch of the PatriotHole vertical ("The internet's last stand against the tyranny of the Leftist Media").

Whereas PatriotHole is known for publishing stories with clickbaity headlines such as "Sorry Liberals, But Gun Control Won't Stop Jackie Chan If He Wants To Take Out 30 People With A Single Mop" and "The Cost Of Feminism: This Single Mother Has Been In Labor For Two Months Because The Father Isn't There To Tell Her To Push," ResistanceHole announced its editorial intentions this morning in a post addressed to President Trump (but using the Trump clan's original name) titled "Mr. Drumpf, Your Newest Nightmare Is A Website Called ResistanceHole." It reads, in part,

For too long, Mr. President, you've been destroying our country from the inside out with your LIES and your TREASONS and—most shameful of all—your RUDE TWEETS. ResistanceHole is here to take a courageous stand against you by pumping out enough shareable content to topple you and the craven liars and incompetent mouth-breathers you surround yourself with.

Mr. Drumpf (President Trump), you should be very afraid, because ResistanceHole is going to fight alongside our beloved hero and legal father, the Honorable Detective Robert Mueller, to kick your orange ass out of 1600 Pennsylvania Avenue so fast you'll be making pee tapes with the KGB in hell by lunchtime. We will unite all the brave #Resistors in this country to expose your web of lies and trap you in a prison of truth.

If you're wondering what kind of coverage, specifically, to expect from ResistanceHole, the very next post it published today carries the headline "Resistance Win! This Artist Was Going To Draw Trump And Putin Kissing, But Was Worried That Seemed Homophobic, So He Had Them Kiss While Thinking About Pamela Anderson."

Like The Onion, ResistanceHole is partially owned by Univision's Fusion Media Group, which outright owns the various old Gawker Media sites including Gizmodo and Jezebel.

By the way, ResistanceHole also started tweeting today. Here's a sample tweet (click the play button on the image if it doesn't start playing for you automatically):