READ THIS NEXT
Beyond MyPillow: the other biggest brand advertisers on Fox News revealed 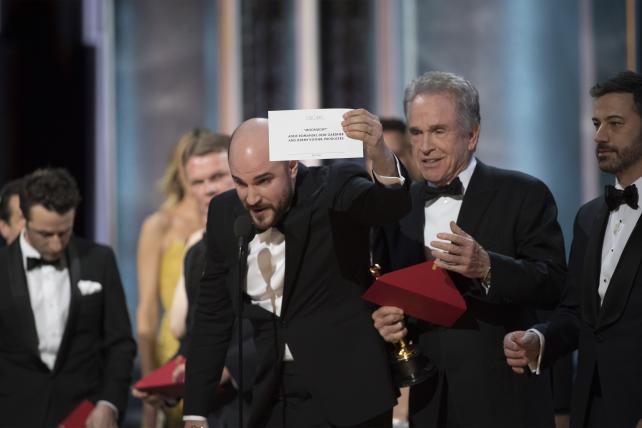 It was the blunder heard 'round the world.

At Sunday's Academy Awards, presenters Warren Beatty and Faye Dunaway mistakenly read the wrong Best Picture winner as "La La Land," not "Moonlight," after receiving the incorrect card on stage. The flub was quickly, if awkwardly, corrected, but it didn't take long for PricewaterhouseCoopers, the accounting firm that has overseen the award process for the Academy of Motion Picture Arts & Sciences for eight decades, to emerge as a culprit.

Experts say the lasting brand damage for the New York-based firm, the world's second largest by revenue, could be severe for a company that has built its reputation on accuracy.

"It is potentially a significant dent to their brand," said Katie Sprehe, director of reputation research at Washington D.C.-based APCO Worldwide. "PwC has had this Oscars gig for 83 years and it's a very public opportunity for them to show off the attributes of the PwC brand—their accuracy, their integrity and their ability to keep things confidential." She noted that the gaffe occurred in front of a much broader audience than just the clients who use the brand's services. Though initial reports estimate the Oscars attracted fewer viewers than last year's 34.4 million, many who didn't tune in likely watched clips of the Best Picture mix-up in news reports Monday morning.

Indeed, PwC drew early criticism from the likes of Les Moonves, chief executive of CBS Corp. Others took to Twitter under the hashtag #envelopegate to compare the error to their preferred presidential election results and Steve Harvey's 2015 Miss Universe mistake.

For its part, PwC immediately issued an apology, in which it specified "Moonlight," "La La Land," Mr. Beatty, Ms. Dunaway and Oscar viewers. In the statement, the firm noted that the presenters were given the wrong category envelope.

"We are currently investigating how this could have happened, and deeply regret that this occurred. We appreciate the grace with which the nominees, the Academy, ABC, and Jimmy Kimmel handled the situation," read the apology.

Moving so quickly was a smart move, but PwC will need to do more in order to repair its reputation, according to Thomas Fladung, VP of Hennes Communications, which specializes in crisis management. "There's the old [saying], when you mess up, you fess up, and you fix up," he said, noting that PwC will need to be transparent with the public about what went wrong and how they are ensuring it will not happen again. "They have to be sincere—it's the action behind the words that is how you come out with your reputation intact," he explained.

It helps that PwC has 83 solid years of helming the 89-year-old Academy Awards tally process under its belt. The Academy of Motion Picture Arts & Sciences did not return a request for comment about the accounting firm's relationship handling future award ceremonies. ABC, which broadcast the Oscars, did not return a call for comment.

The setback for PwC could open the door for accounting competitors like Ernst & Young, Deloitte and KPMG, who may take advantage of the situation to build up their own brands.

Ms. Sprehe said such a public mistake positions PwC in the unenviable position of being the butt of jokes.

"Smart competitors would take advantage of this and rub a little bit of salt into the wound," she said, noting that social media lends itself to a more humorous approach.