Viewers Checked in for Chris Rock, Checked Out of Niche Celebration
READ THIS NEXT
Facebook offers millions of dollars in refunds to advertisers tripped by measurement mistake 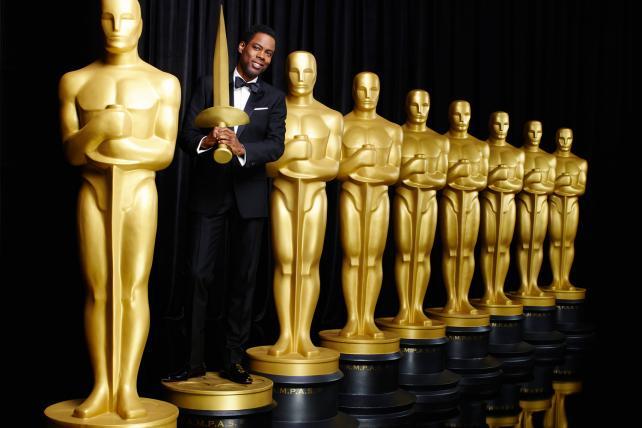 hris Rock returned to host the Oscars for a second time on Sunday on ABC.
Credit: Courtesy ABC/Andrew Eccles

A Best Picture slate loaded with art house fare and an ongoing brouhaha about diversity (or the conspicuous lack thereof) conspired to take a bite out of Oscar ratings, as ABC's presentation of the 88th Academy Awards was the third least-watched Oscars-cast of the modern era.

According to Nielsen live-same-day data, Sunday night's Oscars ceremony drew an average audience of 34.3 million viewers, marking an 8% decline from last year's turnout (37.3 million). The 88th installment of the movie industry's annual celebration of itself out-delivered only two previous Oscars broadcasts, eking out a win over the 2003 event (33 million) and the 2008 show (32 million).

The three-hour-and-twenty-one-minute broadcast also averaged a 10.4 rating among adults 18 to 49, which works out to 13.2 million members of the advertiser-coveted demographic. Targeted viewers were down 6% from last year's 11.0 rating.

Ironically, while network suits have long championed the Oscars as the "Super Bowl for Women," as it turns out, the Super Bowl is the Super Bowl for women. According to Nielsen, some 52 million women watched CBS' Super Bowl 50 broadcast, topping the number of overall Academy Awards viewers, male and female, by 52%.

Viewers began churning away from the broadcast almost as soon as host Chris Rock wrapped up his lacerating opening monologue. While stinging barbs about casual and not-so-casual racism had some attendees clapping anxiously, the comedian closed out his set with a simple call for fair play. "We want opportunity," Mr. Rock said. "We want black actor to get the same opportunities as white actors. That's it."

Arguably the highlight of the show, the monologue was also the most-watched segment, averaging some 37.6 million viewers. From there, viewers began slipping away, dropping to 33.1 million at 9 p.m. to 30.6 million at 9:30. By the time much of the serious hardware had been handed out, the audience had shrunk to 28.2 million viewers.

If the #OscarsSoWhite movement may have accounted for some of the stunted results, the Academy of Motion Pictures Arts and Sciences didn't do itself or its broadcast partner any favors in virtually ignoring the $920 million blockbuster "Star Wars: The Force Awakens." While smaller pictures like "Spotlight," "Brooklyn" and "Room" deserved all the praise that was heaped upon them in the run-up to the ceremony, carving out a little space for the LucasFilms mega-smash would have gone a long way toward securing a much broader audience. After all, the box office bona fides of James Cameron's "Titanic" in 1998 helped care up the biggest audience in Oscars history: 55.3 million viewers.

While the final results were a let-down -- the 10 previous broadcasts averaged 38.8 million viewers -- the Oscars once again will retain bragging rights as the year's No. 1 entertainment (read: non-sports) program. That said, Tinsel Town's dog-and-pony show is no match for the National Football League; no fewer than seven NFL games out-performed Sunday's broadcast, a roster that includes six playoff match-ups and Super Bowl 50.

On average, advertisers paid $2 million for every 30-second nugget of airtime, up a tick from the year-ago $1.9 million. Altogether, 26 sponsors ponied up north of $100 million to air 50 spots. (As the Academy restricts ABC's ad load to around seven minutes of commercial messaging per hour — the average broadcast show is studded through with as many as 15 minutes of paid media per hour — the Oscars is perhaps TV's most uncluttered high-profile ad environment.)

As is the case with the Super Bowl, marketers who buy Oscars inventory are not provided anything in the way of a formal ratings guarantee, although in the event of an absolute debacle, ABC obviously would make good-faith arrangements to provide audience deficiency units for its marquee sponsors.

Speaking of high-profile sponsors, the usual suspects were all represented, as Samsung, Cadillac, AT&T and American Express all heavied up for yet another Oscars broadcast. Altogether, the four brands accounted for nearly 42% of the overall ad spend. Meanwhile, newcomer Kohl's, which in January replaced JCPenney as the official retailer of the Oscars, aired four themed spots in which moms, dads and kids lip-synced a series of memorable acceptance speeches.

Other Oscars backers included McDonald's, Lexus, IBM, Android, AARP, Bud Light, LinkedIn, Diet Coke and Netflix. After L'Oreal bowed out in 2009, cosmetics/beauty brands have all but abandoned the glamour showcase; last night, Neutrogena was the lone representative of the once ubiquitous category.

As expected, no sponsors backed out of their original Oscars commitments, despite the efforts of bold face names like Spike Lee, Jada Pinkett Smith and the Rev. Al Sharpton, who last month urged others to sit out the Oscars as a show of solidarity with the #OscarsSoWhite movement. For his part, Mr. Sharpton said he hoped a general boycott would serve as a wakeup call to sponsors.

While the aforementioned sponsors all dug deep to secure their place in the Oscars broadcast, at least one brand enjoyed a sweet free ride. A bit in which Mr. Rock and a troop of Girl Scouts peddled Thin Mints and Samoas to stars like Morgan Freeman, Kate Winslet and Tina Fey -- Louis Gossett Jr. was forbidden from indulging his sweet tooth; "You can't have these! You have diabetes!," Mr. Rock joked -- generated millions of dollars in free media exposure.