Playbill, the Magazine of Broadway, Makes its Logo a Rainbow Ahead of Pride Week | Ad Age
Skip to main content
Sign In Register

Playbill, the Magazine of Broadway, Makes its Logo a Rainbow Ahead of Pride Week

Magazine Celebrates 130th Anniversary
READ THIS NEXT
Does it matter if Facebook advertisers can still target fans of Trump?
Playbill has turned its logo rainbow for the month of June.
Credit: 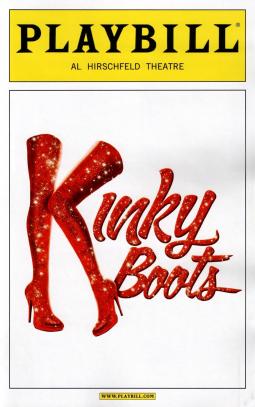 Playbill, the magazine distributed to theatergoers nationwide, has swapped its iconic yellow and black logo for the rainbow flag synonymous with the LGBT community as part of a campaign called "30 Days of Pride."

It's the first time the magazine, which has its 130th anniversary this year, has altered its logo in such a broad format. The move is timed to coincide with Pride Week, which falls on the last week of June.

For the month of June, the rainbow logo is appearing on the 1.6 million Playbills distributed at theaters on and off Broadway in New York, along with content inside the magazine about LGBT contributions to theater. The campaign also features daily web stories on the topic.

"We wanted to do something for our 130th anniversary that wasn't just about us, but was bigger than us," said Philip Birsh, CEO and president of Playbill. "This was a really great way for us to not only celebrate who we are, but also champion fairness. That's critical to us."

"It's one thing to talk about it and nice for people to care about it," he added, "but you have to do something about it, demonstratively and strongly, without any question, with a statement that says without ambivalence: This is how we feel; this is who we are; and this is important to us."

The Playbill model is unique in publishing. Although it's probably best known as the program for most live theater in the U.S., the magazine covers the world of Broadway and the theater industry at large with editorial content in its print pages and online, according to Blake Ross, Playbill's editor in chief.

A national edition with only this editorial content, minus the production-specific pages, is sent to subscribers every month, but the magazine declined to disclose how many paid subscribers it has.

Playbill's total circulation is roughly 3.9 million, which includes not only theaters but also fine arts institutions, she added.

"The bulk of our business is from distribution in theaters," Ms. Ross said. She declined to discuss the magazine's ad revenue.

Last November, the magazine named a new publisher, Bruce Hallett, who had spent about 25 years at Time Inc., where he served as president of Time and Sports Illustrated. He filled a role that Mr. Birsh had been handling in addition to his duties as president and CEO.

"Theater can be so ephemeral," said Ms. Ross. "Playbill is something from the show that people get to keep."

The magazine might end up turning its logo rainbow every June, she added. "We've gotten such an amazing response from community and audience members," Ms. Ross said. "We could potentially do this on an annual basis."

Playbill has altered its logo on two occasions, although in each instance the change occurred for copies distributed at one theater. There was a one-night-only commemorative edition for the 10th anniversary of "Wicked," when Playbill published issues with its logo in green, and a similar treatment for a "Chorus Line" anniversary, when the logo became gold.