LONDON (AdAge.com) -- Soon after the U.K. edition of "Skins" began back in 2007, 18-year-old Rachel Bell tagged her MySpace page with the label "Skins party" and invited people to a "Let's trash the average family-sized house" disco, suggesting that they "Bring drink ... were gunna run out quick." 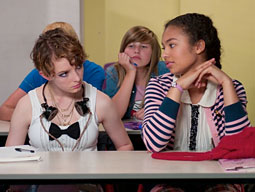 The U.K. show's fifth season begins Thursday, sponsored by Reckitt Benckiser's Clearasil brand.
Credit:
E4
The result was $30,000 worth of damage to her parents' home. Seven police cars and a dog unit were called to the house, as 200 party-goers urinated on Rachel's mother's wedding dress, stole cash and jewelry, vomited copiously and barricaded the back door to prevent intervention.

So you could say that the show's U.K. debut was every bit as controversial as the U.S. debut last week -- except British marketers weren't put off by Ms. Bell's antics or the show's content.

The U.K. show's fifth season begins Thursday, sponsored by Reckitt Benckiser's Clearasil brand, which follows in the footsteps of other respectable marketers including telecom giant 02 and the British School of Motoring. Microsoft is currently advertising on the homepage of the program's website.

TV audiences -- both on Channel 4 and its youth offshoot, E4 -- have held steady at around 1 million throughout all four U.K. "Skins" seasons to date, with many more viewing online. On Facebook the show has nearly 2.5 million fans, and on Twitter it has amassed 85,000 followers so far.

"It's all about the heritage of Channel 4 and E4 and the place that they have in the viewers' and advertisers' psyches," said Andy Spray, head of investment at PHD in the U.K. "They have a history of challenging, youth-focused, provocative content. If 'Skins' had been shown on BBC prime time it would have been different, but on E4 [at 10 p.m.] it's less of an issue."

Following controversy over a plot involving a crib death and a baby swap, the BBC recently cut short the storyline of its most popular soap, "Eastenders," and the public outcry resulted in the lead actress quitting the show. So the British public do know how to be outraged -- but not by "Skins," which they voted as winner of the British Academy of Film and Television Arts' audience award in 2009.

"Marketers plan on a channel basis, and they know what audiences they will find where," Mr. Spray explained. "Clients who are sensitive to risqu? content tend to be U.S.-owned. When we worked with Pizza Hut they would always stay away from anything controversial. Advertisers targeting the 16-to-24 audience see 'Skins' as a cutting-edge show for the youth of today."

"Skins" is kept fresh by bringing in an entirely new cast every two years, and is well respected for being one of the few shows on TV that breaks new recording artists, thanks to a cutting-edge soundtrack.

These two elements are brought together in the Skins Tour, where audiences can see bands live and at the same time step into a booth to audition for a part -- anything from extras to lead characters -- in the show itself. Previous actors in the series include Dev Patel, who went on to star in Oscar-winning "Slumdog Millionaire," and Nicholas Hoult, who played alongside Colin Firth and Julianne Moore in Tom Ford's "A Single Man."

The first episode of "Skins" attracted an audience of 1.5 million viewers, making it E4's biggest U.K. produced hit. Ratings for the second season peaked at 884,000 -- a 6% audience share and 60% of the 16-to-24 demographic; the third season kicked off with 877,000 viewers; and season four was back up to 1.5 million. Unofficially, audience figures are estimated to be much higher due to the show's presence online, which is not counted in official ratings .

Season six has already been confirmed, while a "Skins" novel was published last year and a movie version is set for U.K. release this summer.