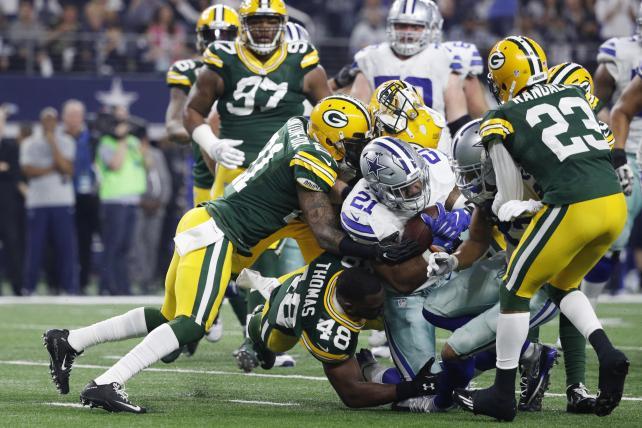 Picture Oakland Raiders defensive end Khalil Mack dismantling a scrawny 7-year-old trussed up in ill-fitting shoulder pads and then flinging a second combatant (even scrawnier) into a pyramid of halftime oranges, and you're halfway to understanding the dominance the NFL has over the TV landscape. The NFL's reach is unwavering and relentless, even if the ratings took a bit of a hit last season.

Ah, yes. The ratings. In part because we live in an era in which pretty much everything can be politicized, you're sure to hear a lot about the NFL's TV ratings over the course of the season (as Sports Illustrated's Jimmy Traina recently lamented, "Not another year of this bullshit"), but the fascination with the Nielsen numbers primarily speaks to football's ability to gather an audience like nothing else on TV.

If the NFL is to rebound from last season's 8% ratings drop, that recovery effort began last night on NBC, when the Super Bowl champion New England Patriots hosted the Kansas City Chiefs. The Thursday Night Kickoff game is one of the biggest draws on the schedule; over the last three years, the official season opener has averaged 26.5 million viewers and a 15.4 household rating, and its performance in the demo is roughly 10 times what the typical scripted series delivers. Going back to 2014, NBC's table-setting NFL broadcast has averaged 12.8 million adults 18-49; by way of comparison, network comedies and dramas now eke out around 1.4 million members of the demo.

What follows is a list of the games that should give NFL advertisers the most bang for their buck, 25 showdowns that feature football's most popular franchises in the most impactful national TV windows. The potential deliveries of the games cited are based on each team's 2016 ratings profile as well as on projected franchise records, past performance and relative positioning on the schedule. (In all national windows, the top 10 highest-rated teams a year ago were: Dallas, Detroit, Pittsburgh, New England, Green Bay, New York Giants, Washington, Denver, Seattle and Minnesota.)

This game was at the top of Fox's pre-season wish list, and little wonder: the Packers last year were the NFL's No. 5 most-watched franchise, averaging 20.3 million viewers in 11 national windows, while America's Team is at the top of the heap with an average draw of 24.4 million viewers. This could very well prove to be a dress rehearsal for the Jan. 21 NFC Championship Game.

Eli Manning and the G-Men always put up big numbers against Big D (at least as far as Nielsen is concerned), and the first official Sunday night game between these two bitter NFC East rivals should be a shoot-out—provided New York wideout Odell Beckham can play on his gimpy ankle. Eli being Eli, expect to see at least one interception that defies all human understanding, but if this one's as close as Vegas anticipates, viewers who stay tuned to NBC throughout the broadcast will be rewarded with the inevitable shot of Cowboys owner Jerry Jones palling around with New Jersey Governor Chris Christie.

When they're all healthy enough to take the field at the same time, the Steelers have the most entertaining offensive unit in the game, which goes a long way toward explaining why they were the third most-watched team last season. Tom Brady and the Pats were No. 4. If Pittsburgh hopes to pick up its seventh Lombardi Trophy, it'll have to figure out how to beat New England in the postseason; both clubs would seem to have a fairly unobstructed path to January, given the lousiness of their respective divisions.

Sick of seeing Dallas on this list? Well, if Dak Prescott delivers on the promise of his rookie season, the entire league is going to be weary of the Cowboys by Columbus Day. Atlanta's that team that choked in the Super Bowl like a guy in a Heimlich maneuver poster.

It's hardly a storied rivalry (the two teams have met 11 times, and only four of those games took place in this century), but this late-season meeting between two of the league's youngest and most dynamic squads has ratings lollapalooza tattooed all over it. And as a bit of bonus good fortune for NBC, the broadcast won't have to compete with "The Walking Dead," which concludes the first half of its eighth season the week before.

The Falcons can never reengineer the events of Super Bowl LI, but they sure could put on a dazzling show while dishing out a helping of ice-cold revenge.

Denver was the seventh most-watched NFL team a year ago, and while quarterback Trevor Siemian won't make anyone in the Mile High City forget Peyton Manning, the Broncos' national following and elite status within the AFC West makes this one a no-brainer. Also, Dallas.

Fox's first NFL game of the season features two perennial playoff contenders, a truly terrifying Seahawks defense and Aaron Rodgers, the greatest quarterback in the game who doesn't subsist on a ridiculous diet of grubs and eels.

The afternoon Serotonin Game is a peculiar matchup, inasmuch as they have played each other with the infrequency of the transit of Venus, but the Cowboys always draw a crowd in the Turkey Day window, regardless of which team they hosting. Note the disparity between the big audience and the household rating; Thanksgiving Day games always deliver lower-than-expected household numbers because everyone's snoozing off the pie crust.

If Pittsburgh doesn't advance to the AFC Championship, Oakland gets there instead. You already know who the home team will be.

Another revenge game. The last time these two teams met, the Packers had their cheese hats handed to them, bowing to the Falcons in the NFC Championship by a 44-21 margin. Look for this game to be more equally matched and for NBC to deliver about half the audience the NFC title bout delivered in January.

The Giants represent the nation's largest DMA and were the NFL's fifth-biggest draw last season, with an average reach of 19.7 million viewers in seven national windows. In a weird bit of symmetry, the other New York/New Jersey team, the woeful Jets, were the fifth-worst draw.

This will be just the second collision between the Packers and Steelers since Super Bowl XLV. Pittsburgh won that December 2013 game by a touchdown. (It wasn't televised nationally, largely because Aaron Rodgers was out with a broken collarbone and both teams were languishing around the .500 mark.)

The over-under on how many times Eli Manning pulls the Eli Manning Face against the Seahawks' D is 3.5.

It always feels a bit perverse when the NFL schedules the team with that name to appear in a Thanksgiving game.

Tom Brady doesn't eat flour, tomatoes or cheese, so the Papa John's spokesman gig will remain Peyton's for as long as he wants it.

Scheduling this game on Christmas Eve may eat into its deliveries. Last year, the Vikings and Packers drew 18.4 million viewers and a 10.0 household rating on Dec. 24, which fell on a Saturday.