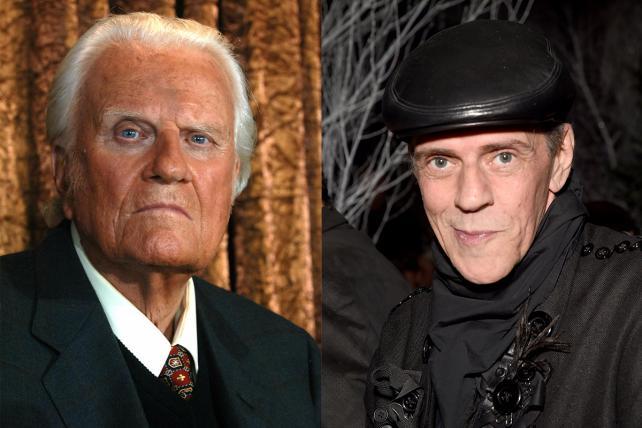 The media doesn't have a lot of speeds when it comes to covering the passing of cultural icons. The typical default mode, at least immediately after death, is stiffly hagiographical; many obituaries are mostly pre-written, sometimes years in advance, so they tend to have a frozen-in-amber, history-book quality to them.

The dawn of the social media era, and especially the birth of Twitter in 2006, changed the equation. A critical mass of brief, unrehearsed expressions of shock and mourning add up to a notable death becoming a "trending topic." In fact, one of the recurring jolts of being on Twitter is seeing the name of a famous person you love trending and then instantaneously experiencing a sinking feeling—you just can't click fast enough to find out if they're trending because they died. (Or, alternately, if they did something wonderful—or terrible.)

In the past 24 hours, both Billy Graham and Judy Blame have been trending topics and the subject of mainstream-media obits, and it's been fascinating to see their vastly different lives juxtaposed repeatedly simply because they happened to die within days of each other. (Graham died today and Blame died on Monday, though his passing was only formally announced yesterday.)

Graham, of course, was much more famous than Blame—and lived much longer (to age 99, vs. 58 for Blame). He was, as a USA Today headline this morning puts it, "America's pastor." Cathy Lynn Grossman writes that,

From the gangly 16-year-old baseball-loving teen who found Christ at a tent revival, Graham went on to become an international media darling, a preacher to a dozen presidents and the voice of solace in times of national heartbreak. ... He took his Bible to the ends of the Earth in preaching tours he called "crusades" ... and uncounted millions say he showed them the light.

He was an evangelical Christian and he was politically cautious—Grossman notes that "he never built a megachurch, set up a relief agency, launched a political lobby or ran for office"—which made it possible for those dozen presidents, of different Christian demoninations, to see him as the (non-controversial) go-to American religious leader.

Graham was a "media darling" because he was a media master; from the 1950s on, he could not only fill a stadium but knew how to draw audiences of millions with his television and radio preaching. And unlike a notorious string of disgraced televangelists, he never succumbed to the temptation to sink to TV's basest level—the lowest-common-demonimator, money-grubbing, infomercial mode that makes so much television preaching so very wrong.

The Reverend Billy Graham was dignified. He looked the part (Johnny Cash-ish). He stayed true to his brand to the end.

Judy Blame was also a media darling (particularly in Britain)—but an accidental one. (Born Chris Barnes in Leatherhead, Surrey, he reinvented himself along the way, running away from home to London at 17 and reportedly choosing his gender-bending new first name to confuse people.) The occupation being bandied about most commonly in his obits is "punk iconoclast"—something he achieved by being a deeply influential stylist, designer and art director. Vogue's Alice Newbold writes that,

Blame came to prominence on London's 1980s club scene, where he made an impact through his signature punk aesthetic and the original jewellery he fashioned himself from modest resources ... Over his career he consulted for John Galliano, Rei Kawakubo at Comme des Garçons, Gareth Pugh, Marc Jacobs and Kim Jones at Louis Vuitton, produced fashion editorials with photographers including Mark Lebon, Jean Baptiste Mondino and Juergen Teller, and helped shape the images of Boy George, Björk, Kylie Minogue and Neneh Cherry.

As Lou Stoppard writes for GQ this morning, "It's almost ironic to write a tribute to Judy Blame for a glossy fashion magazine." He was that much of a DIY icon, and "he wasn't impressed or inspired by the latest look or a shiny new product." The creative world, though, endlessly appropriated and recyled his aethetic—in 2015, for instance, The Cut declared him to be the unofficial muse of that year's Men's Fashion Week—and by virtue of his persistence and stealthy, behind-the-scenes omnipresence, he became something of an anti-Establishment Establishment figure. (He's been the subject of multiple gallery and museum exhibitions, including a 2016 survey at London's Institute of Contemporary Arts.)

As Paul Flynn writes in The Guardian, "Leaf through your record collection—Björk's debut, Neneh Cherry's "Raw Like Sushi"—and you will probably find you already own a piece of Blame's wonderful art. ... You know Judy Blame's work even if you don't know Judy Blame." The same is true if you've got old issues of the iconic British indie-culture bibles The Face and i-D (hello, fellow print-media nerds) from their glory days.

And now, here we are.

While their worlds aren't quite colliding, Billy Graham and Judy Blame keep on popping up in odd juxtaposition in my media feeds—both mainstream and social. It's not hard to imagine what they would have thought of each other.