Space Case: 'Rick and Morty' Reigns Supreme Over the 18-34 Demo 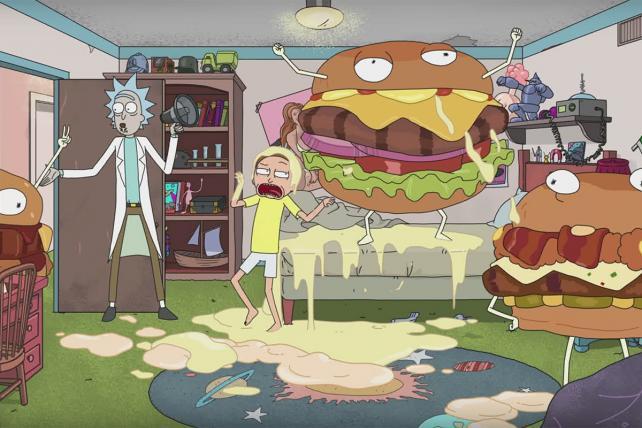 The creators of 'Rick and Morty' have also been happy to work their characters into branded content for marketers such as Carl's Jr./Hardee's.
Credit: Adult Swim via YouTube

While there is no magic formula to help lure people between the ages of 18 and 34 years back to traditional TV, network executives could do worse than crib from the pages of the "Rick and Morty" playbook. An animated celebration of alcoholic nihilism, time travel and parallel universes, the Adult Swim show just closed out its third season to demo deliveries that put the Sunday night broadcast lineup to shame.

According to Nielsen live-plus-same day data, the "Rick and Morty" finale scared up 1.52 million adults 18 to 34, more than doubling the 702,000 members of the demo that tuned in for Fox's inaugural "Animation Domination" block of the season. Fox's top draw among the younger crowd was "The Simpsons," which kicked off its 29th season with an average draw of 807,000 adults 18 to 34, good for second place on the night for all scripted programming.

Because Fox's target demo is the adults 18-to-49 set, "Rick and Morty" only competes with "The Simpsons" for the younger chunk of the age bracket. If there's a rivalry between the two shows, it's a friendly one; in May 2015, the time-travelling duo [literally] crashed the "The Simpsons'" opening couch gag, killing Marge, Homer, Bart, Lisa and Maggie in the process.

The only offerings that "Rick and Morty" failed to top in Adult Swim's hard-to-reach target demo were NBC's pre-game show "Football Night in America," which delivered 1.7 million adults 18 to 34, and the subsequent "Sunday Night Football" matchup between the Indianapolis Colts and Seattle Seahawks (3.25 million). In other words, the NFL is all that stands between the late-night cartoon, about a boozebag mad scientist and his dopey grandson, and total global domination.

Co-created by Dan Harmon ("Community") and voice actor Justin Roiland, "Rick & Morty" posted significant ratings gains in its third season. Discounting the surprise (read: unpromoted) April 1 episode, the nine-part arc of "Rick and Morty" averaged 2.5 million viewers, a 1.9 in the adults 18-to-34 demo (1.32 million) and a 2.4 among men 18-to-34 (816,960). In terms of its overall audience, the show grew its live-same-day reach by 27 percent compared to season two's 1.97 million viewers while boosting its showing in the target demo by a whopping 46 percent.

Older viewers are flocking to the show as well. Each original episode beat everything on basic cable in the 18-to-49 demo and it wasn't even close; in three successive Sundays, "Rick and Morty" practically doubled the performance of AMC's "Fear the Walking Dead," averaging a 1.5 rating to the zombie apocalypse drama's 0.8.

Adult Swim's ability to reach what may very well be the most elusive group of consumers on the planet is a boon to marketers who are looking to shill for their various tech, telecom, fast food, movies and snack products without paying those pricey NFL rates. Among the most visible advertisers in this season of "Rick and Morty" were Old Spice, PlayStation, T-Mobile, Apple (Watch and iPhone), Amazon Echo and Burger King.

As with legacy Adult Swim series like "Aqua Teen Hunger Force" and "Squidbillies," the "Rick and Morty" audience perhaps over-indexes on, well, marijuana enthusiasts. At least that's the impression one gets when the sheer number of munchies brands are tallied up; among the snack manufacturers that bought time in the show this season were Doritos, Cheetos, Pop-Tarts, Twix and Skittles. (This of course is not to say that the aforementioned products may only be enjoyed by stoners … but if the shoe fits, you, like, probably won't be able to find the other one, maaaan.)

When not engaged in the arduous efforts involved in writing, animating and voicing the show (season two aired way back in the summer of 2015), Harmon and Co. have been busy creating branded content for the likes of Carl's Jr./Hardee's and the 20th Century Fox theatrical "Alien: Covenant." A 30-second Carl's Jr./Hardee's "Tex Mex Bacon Thickburger" spot features Rick bursting into Morty's bedroom at 4 a.m. in order to introduce a cast of oversized anthropomorphic hamburgers, which mostly just bumble around and splash gouts of sauce all over the place. Shortly after the hamburger spot aired (it premiered during the surprise April Fool's Day episode), a 45-second teaser for the summer "Alien" release offered space travelers and interstellar explorers some invaluable advice about how the copious consumption of booze and drugs can help overpower even the most pernicious Xenomorph.

"'Rick and Morty' is the No. 1 show on the No. 1 network in the demo, and it's still growing," said Christina Miller, President and General Manager of Turner's Cartoon Network and Adult Swim. "The show is still finding new fans, and we have a very great group of advertisers who are happy to be able to reach them."

While Miller did not confirm a fourth-season order for "Rick and Morty," Sunday night's finale closed out with a teaser for a future run. In the post-credits sequence, a recurring character by the name of Mr. Poopybutthole drops in to break the fourth wall and sorta kinda announce that the show will be returning. Sometime. Maybe. "See you for season four in like, a really long time," the ambulatory diseased-Twinkie-looking thing warbles. "I might even have a big, white Santa Claus beard. … See ya then!"

For advertisers looking to interface with the Incredible Shrinking Demo, "Rick and Morty" can't come back soon enough.