He helmed the iconic San Francisco-based monthly for 26 years
READ THIS NEXT
‘America Must Change’: The story behind Time’s latest cover artwork 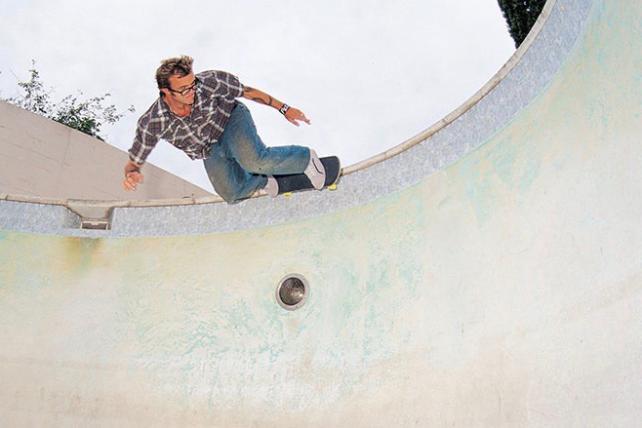 Confession: I'm an old, thoroughly uncool guy and I mostly sit at my desk all day slapping away at a computer keyboard, but I still subscribe to skateboarding magazine Thrasher. It's been awhile—a long while—since I've hopped on a skateboard, and even when I did, I was pretty lousy at it. But reading Thrasher was and is a joy unto itself.

You wouldn't think that a print magazine aimed at teen and twentysomething (mostly male) skaters could still be a thing in 2019. But you can thank Jake Phelps, the editor of the San Francisco-based monthly for the past 26 years, for keeping it real, keeping it relevant and keeping it wildly, urgently alive.

The skateboarding world is suddenly mourning him and celebrating his life and legacy; he died Thursday at age 56. The cause of death hasn't been announced, but there's been some speculation that lingering health issues related to a major skateboarding-related tumble he took in 2017 probably didn't help. See "'I Whacked My Head Pretty Good': Skateboarder and Thrasher Magazine Editor Jake Phelps After Suffering Serious Head Injury in SF," via local NBC affiliate KNTV.

It's telling that KNTV's post about his death—the top "trending" story on its website at the moment—is headlined "Skateboarder and Thrasher Magazine Editor Jake Phelps Dies." He was a skateboarder and skate-world legend first and foremost.

But his magazine—damn. I kept renewing my sub year after year (long after I aged out of the demo) because it was just so ridiculously fun and weird and rude and thrilling. The March issue's cover photo (scroll down to the very bottom of this post to see it) shows a skateboarder descending the railing of a metal staircase linking two rusty old silos; he's gotta be at least five stories off the ground, and obviously he shouldn't be there. In fact, it's insane that he's there—it's insane what he's doing. The cover needs no coverlines, because the message—still breaking the rules, still risking life and limb for the love of skateboarding—is implicit.

Somehow, even though skateboarding has long been quasi-mainstreamed and commodified, Thrasher maintained a quite literally dangerous edge. That was pure Phelps. Though there are plenty of major brands that have linked themselves (either organically or as interlopers) to the skateboarding subculture—Supreme most notably—Phelps' Thrasher still felt legitimately, defiantly gritty. It's a very photo-driven magazine and the ads are mostly for indie skate gear companies that have little or no profile outside of the milieu. The March issue is so jammed with ads that it's perfect-bound.

Jake Phelps took the helm of Thrasher in 1993. He started working there in the '80s (the magazine was founded by Kevin Thatcher, Eric Swenson and Fausto Vitello in 1981), doing everything from writing a product-review column to working in the shipping department (no doubt helping to send off, for starters, countless t-shirts emblazoned with the iconic Thrasher logo). A 2016 California Sunday Magazine profile of Phelps by Willy Staley begins, "I had spent only a few minutes with Jake Phelps before someone called him an asshole"—the result of an encouter with a "a middle-aged cyclist."

It's worth noting that Staley's meeting with Phelps for the profile came in the wake of a different serious tumble; five days earlier, while skating, he'd been hit from behind by a car and "the impact sent the left side of his face hurtling streetward, and all of him, subsequently, to General Hospital for nine stitches. ... An unwillingness, or inability, to stop is perhaps the defining characteristic of Phelps's career."

Staley describes the fruits of the man's day-job labor thusly:

The magazine occupies such a privileged space in skateboarding's collective imagination that it's difficult to know what to compare it to. Skaters call it "the bible," but we're prone to hyperbole. Maybe it's Vogue, but for degenerates, and Phelps is skateboarding's Anna Wintour. Phelps likes to think of himself as the Thrasher brand personified, and in many ways, from his caustic wit to his encyclopedic knowledge of the sport, that's true.

I love that "Vogue, but for degenerates" line, but the (hilarious) Anna Wintour reference doesn't quite resonate. Maybe because it's hard to think of Wintour or any of the coddled media-world grandees of her ilk ever being able to pull off Phelps' zero-fucks-given attitude. Or maybe it's more that the only fucks Phelps did have to give were for one thing and one thing only: skateboarding.

As Tony Vitello, the son of one of the magazine's founders, writes in an Instagram tribute: "I never met anybody who loves anything more than Jake worshipped skateboarding."