'Roseanne' may be dead, but 'The Conners' is a modest insurance policy for ABC | Ad Age
Skip to main content

'Roseanne' may be dead, but 'The Conners' is a modest insurance policy for ABC 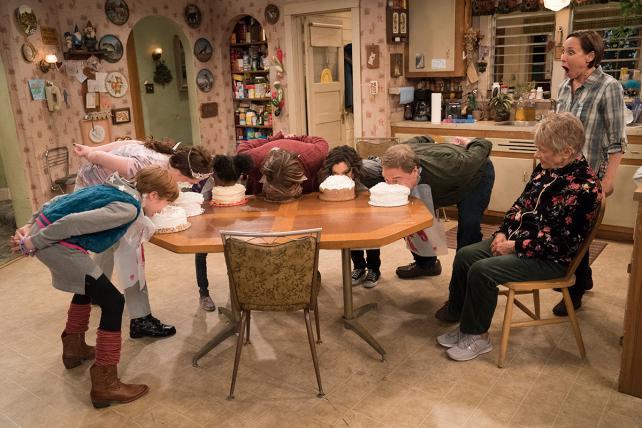 Weeks after ABC pulled the plug on its wildly successful reboot of Roseanne Barr's eponymous sitcom, the network has announced that it will redevelop the show without her. ABC and "Roseanne" executive producer Tom Werner have agreed to a straight-to-series 10-episode order for "The Conners," a multi-camera comedy that will feature legacy cast members John Goodman, Laurie Metcalf, Sara Gilbert, Lecy Goranson and Michael Fishman.

A premiere date will be announced later this summer, but ABC hopes to have the show ready for a fall launch in its Tuesday 8 p.m. slot, where it will lead into the freshman comedy "The Kids Are Alright."

In a statement released Thursday night, Werner said that his production company is "grateful to have reached this agreement to keep our team working as we continue to explore the stories of the Conner family."

Per terms of the deal, Barr will have no creative or financial interest in the revised show. And while a pilot script has not been written, the synopsis would seem to suggest that the Roseanne character probably shouldn't buy any green bananas. (The official line from Werner Entertainment is that a "sudden turn of events" will lead to new, unforeseen challenges for the Conner family.)

Should the show's producers elect to kill Roseanne off, the opening installment of "The Conners" should draw a crowd. The death of a primary character often sets off a storm of curiosity, even among seemingly disinterested viewers; back in September 2011, the Charlie Sheen-free Season 9 premiere of CBS' Two and a Half Men" delivered a jaw-dropping 28.7 million viewers.

"I regret the circumstances that have caused me to be removed from 'Roseanne,'" Barr said, referring to the racist tweet storm that led to the show's cancellation last month. "I agreed to the settlement in order that 200 jobs of beloved cast and crew could be saved, and I wish the best for everyone involved."

As much as the "Roseanne Minus Roseanne" scenario should help ABC shore up its Tuesday comedy lineup, buyers are skeptical that the network will be able to secure a premium for inventory in "The Conners." For one thing, the latest incarnation of "Roseanne" wasn't exactly a license to print money—this despite the fact that it closed out the 2017-18 broadcast season as network TV's top-rated show.

According to Ad Age's annual buyer survey, the going rate for a 30-second spot in "Roseanne" as negotiated in last year's upfront was just $167,000 per unit, a price that had been pinned to a projected guarantee of a 1.8 in the adults 18-49 demo. ABC's early asking price fell well short of the show's eventual deliveries—after bowing March 27 to an astonishing 18.4 million viewers and a 5.4 rating. But the revived "Roseanne" went on to average 13.5 million viewers and a 3.5 demo over the course of all nine episodes, with demand in the scatter market lifting the average unit cost to $185,000 a pop, according to Standard Media Index data.

As much as ABC made up a lot of ground in scatter—the magic combination of hypercaffeinated ratings and increased advertiser demand drove the going rate for a 30-second spot in the May 22 season/series finale of to $251,000—make-goods took a bite out of "Roseanne's" earning potential. Audience deficiency units, or ADUs, ate into the amount of "Roseanne" inventory against which ABC could transact; per SNI estimates, about 13 percent of the show's units were reserved for make-goods.

When ADUs and scatter pricing are factored into the final calculus, SNI estimates that season 10 of "Roseanne" generated $16.5 million in ad sales revenue, or about $1.83 million per episode. ABC paid Werner Entertainment as much as $3.5 million per episode to carry the show.

Buyers on Friday said that "The Connors" would likely command a unit cost more in keeping with the $125,000 rate ABC had fetched while negotiating for spots in "Roseanne" time slot predecessor, "The Middle."

"There's going to be a lot of curiosity driving impressions in the first episode [of 'The Conners], as fans and people who maybe aren't such big fans tune in to see how they write Roseanne off," said one buyer. "But I don't see the new show pulling the same kind of numbers 'Roseanne' did last spring … and even that dropped pretty fast."

If "The Conners" isn't expected to command the same princely rates as would a hypothetical new influx of "Roseanne" episodes, those 10 fresh half-hours could go a long way toward helping steer viewers to the period comedy "The Kids Are Alright." The '70s-era Mary McCormack-Michael Cudlitz sitcom is a top priority for ABC in 2018-19, and buyers surveyed after the May upfront presentations said it looked like one of the more promising new broadcast series on the docket.