Death Becomes Her: In killing off Roseanne, 'The Conners' draws a huge crowd | Ad Age
Skip to main content

Death Becomes Her: In killing off Roseanne, 'The Conners' draws a huge crowd 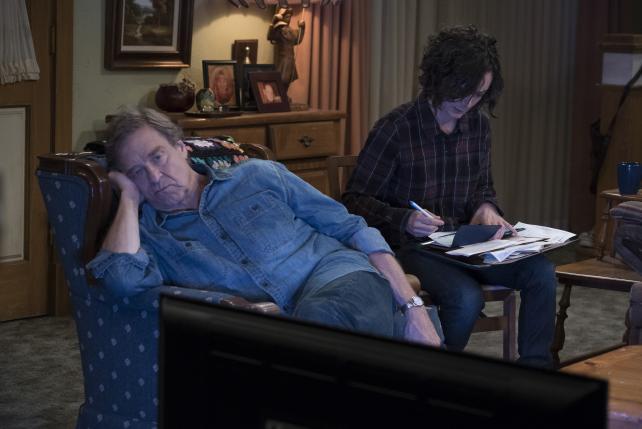 A scene from 'The Conners.'
Credit: ABC/Eric McCandless

In killing off the character Roseanne Conner, ABC on Tuesday night may well have ensured the longevity of the rest of the fictional family.

According to Nielsen preliminary broadcast nationals, the premiere of the "Roseanne" spinoff "The Conners" averaged 10.5 million viewers and a 2.3 rating, which translates to nearly 3 million adults 18-49. And while the TV turnout for the "'Roseanne' Minus Roseanne" opener didn't come anywhere near the 18.4 million viewers/5.2 demo served up by the March 27 reboot debut, Tuesday night's sampling was the highest for a new fall series.

(Procedural note: As much as the early nationals data may be adjusted upwards to reflect this afternoon's live-plus-same-day ratings, statistically there is almost no discernable difference between the numbers cited above and what advertisers might expect to see when the C3 currency data is processed next month. In other words, all the time-shifting in the world won't impact the transactional returns, largely because very few people bother watching the commercials when they are in playback mode.)

As much as critics of ABC's decision to boot series creator and star Roseanne Barr likely sat out the opening salvo of "The Conners," the network couldn't have asked for better ratings results. Not only does that 2.3 demo more than double ABC's seasonal scripted-comedy average (1.1), but it marks the upper limit for all but a handful of broadcast sitcom episodes. Since the season began last month, only CBS's "The Big Bang Theory" has put up a higher demo rating, although the 2.5 the show scared up on Sept. 24 will be eclipsed by the inevitably huge delivery for the spring series finale.

While the curiosity factor likely went a long way toward drawing viewers to ABC—in a largely chuckle-free half-hour, "The Conners" effectively erases Roseanne by killing her off with an off-screen opioid overdose—ratings for the subsequent nine installments are almost certain to decline in accordance with TV's law of diminishing returns. But even if "The Conners" loses half of its opening audience (as did "Roseanne"), the remaining knot of enthusiasts would still justify a renewal. When surveyed before the season began, buyers predicted "The Conners" would earn bragging rights as the top-rated new series; much of those projections were predicated on the lofty expectations for the premiere and the show's truncated order.

Advertisers that bought inventory in "The Conners" include Pepsi, Pizza Hut, Domino's, Snickers, Outback Steakhouse, Cheerios and Ritz Crackers. (Anyone else sensing a theme here?) Per iSpot.tv data, movie studios were also well represented in the premiere, with Universal Pictures buying a 30-second spot to promote its "Green Book," and Warner Bros. ponying up to get fannies in seats for the "Fantastic Beasts" sequel. Lastly, ABC corporate cousin Walt Disney Animation used "The Conners" to hype "Ralph Breaks the Internet."

Buyers in the upfront on average paid $201,065 for each half-minute unit in "The Conners," making it the most expensive new series and the sixth-priciest scripted investment on network TV.

The strong rollout of "The Conners" helped give boost to lead-out "The Kids Are Alright," which premiered in the 8:30 p.m. slot to 6.58 million viewers and a 1.4 in the dollar demo. There's a good news/bad news case to be made for the retro ensemble comedy; on the one hand, "The Kids Are Alright" squandered nearly 40 percent of its lead-in audience, but on the other hand, its preliminary delivery was up 27 percent compared to the year-ago time slot occupant, "Fresh Off the Boat."

Also bowing on ABC last night was the Nathan Fillion vehicle "The Rookie," which managed to eke out 5.38 million viewers and a 1.0 rating in the largely abandoned 10 p.m. hour. This preliminary number established the heavily-promoted "The Rookie" as the monkey in the middle between CBS's veteran procedural "NCIS: New Orleans" (0.8) and NBC's freshman hospital drama "New Amsterdam" (1.2).

If reaching just 1 percent of the population of adults 18-49 doesn't exactly seem like cause for celebration … well, it's not. All but haunted by failure, ABC's Tuesday 10 p.m. slot for years has functioned as something like a restaurant in the food court of a crumbling strip mall, one that seems to turn over every six months or so. Last season's Clucky's Chicken, "Kevin (Probably) Saves the World" ended its run after averaging a 0.7 in the hour, only to be succeeded by the Chick-In-&-Out that is "For the People." (That show only scratched out a meager 0.6 rating, but the imprimatur of executive producer Shonda Rhimes helped ABC justify its renewal.)

Other busts in ABC's terminal Tuesday night time slot include the long-forgotten dramas "Wicked City," "Of Kings and Prophets," "Forever," "Lucky 7" and "Killer Women." Considering the network's struggles in the hour and the fact that the average rating at 10 p.m. across the Big Three broadcast nets is just a 1.0, there's no reason for Fillion fanatics to panic just yet.