Sick leave: NBA hiatus could push the Finals back into midsummer

Adam Silver's COVID-19 quarantine is a shared sacrifice for fans and advertisers, leaving a ragged hole in the spring sports TV schedule
READ THIS NEXT
‘America Must Change’: The story behind Time’s latest cover artwork 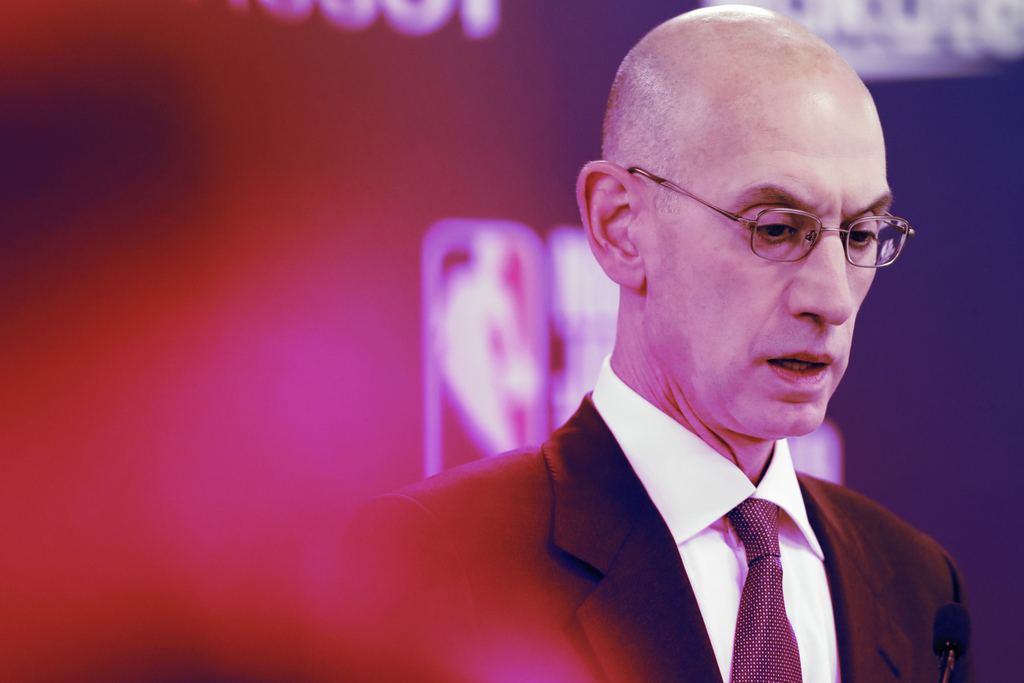 In putting the 2019-20 season on hold immediately after Utah Jazz center Rudy Gobert tested positive for COVID-19, the NBA on Wednesday night took a definitive step toward mitigating the miseries a full-blown outbreak would wreak on its players and fans. Commissioner Adam Silver’s call to suspend play at around 9:30 p.m. EDT is one that will cost the owners and athletes a good deal of money, while introducing a whole lot of uncertainty into the lives of those who schedule and sell NBA games on ESPN and TNT.

It was also the right move.

At the moment, little about the fate of the NBA season can be said without first laying down a foundation of qualifiers. As ESPN hoops reporter Adrian Wojnarowski said on this morning’s “Get Up,” no timeline has been established for a return to normalcy. “They don’t know today when they can start playing again or what are the playoffs going to look like, or if they’re going to have to move the season into the summer,” Wojnarowski told “Get Up” host Mike Greenberg. “They’re not going to have a clear answer until they know when it is safe again to be able to put players and organizations back to work.”Based on the established coronavirus isolation protocol, the NBA work stoppage will extend through March 26 at the very latest, assuming the better part of the players who have come in contact with Gobert in the course of the past few weeks were quarantined this morning. (Also testing positive today was Utah standout Donovan Mitchell.)

And it’s not merely the Jazz who will have to be monitored for signs of the contagion; since the beginning of the month, Utah played in four cities (Cleveland, New York, Boston, Detroit) and hosted the Toronto Raptors. The transitive property would suggest that each player on all 30 NBA teams has directly or indirectly come into contact with Rudy Gobert over the last two weeks, and given the rampant communicability of the virus, it perhaps would be wise to encourage a league-wide voluntary quarantine.

Thus far, the quarantine advisory has been made only to the players from the five aforementioned franchises that have been in direct contact with Gobert and the Jazz since March 1.

NBA players and fans who potentially crossed paths with Gobert aren’t the only people who may wish to closely monitor their health for any signs of the sickness. On Monday, after a Jazz shootaround, the 27-year-old Frenchman made a point of touching every microphone and recorder that had been set up before him on the pressroom table. There’s no telling how many reporters may have carried a bit of the virus with them as they made their way out of the arena, or how many people they passed it along to over the next several hours.

Of course, to assume that the NBA might be satisfied by the medical minimum 14-day hiatus is to reach for the best-case scenario—something that generally is not ripe for the picking in the midst of a pandemic. Instead, it may be more instructive to look to how officials from the Chinese Basketball Association handled matters when the coronavirus began leveling citizens of the People’s Republic. The CBA effectively brought its season to halt on Feb. 1, just days after it sent its American imports back home. Now that the country says it has passed the peak of the disease, the CBA could start up again by April 2.

For the NBA, a nine-week cooling-off period presumably would wipe out 245 remaining regular-season games, or about one-fifth of the overall schedule, while pushing the start of the playoffs back by a month, into mid-May. Without also factoring in concessions and merch, those lost regular-season games would take a $280 million bite out of the annual gate receipts. Such losses would be particularly hard to swallow given the hit the league has already taken as a result of its strained relationship with China; according to Silver, the NBA this year could lose as much as $400 million in revenue from that very large market.

But for the commissioner’s loss estimate, this is all a back-of-the-napkin projection. The NBA could bounce back in three weeks, in four, in five—lacking clairvoyance, we simply do not and cannot know how the hiatus will play out. As the much-traveled Wojnarowski told ESPN's Scott Van Pelt last night, “There’s no sense of how long [this will last]. Because there has been so little testing … in this country, they didn’t have a handle within the league about the potential for this,” Wojnarowski said. “And now that a player has tested positive for it, the ripple effects that has on his own team, on other teams—clearly this is uncharted territory.”

From the NBA’s side of things, all we have to go on are the words it issued in last night’s press release. The league said it will use the hiatus “to determine next steps for moving forward in regard to the coronavirus pandemic,” which frankly doesn’t tell us anything we don’t already know. The league plans to hold a conference call with its board of governors later this afternoon.

Another vague statement was delivered to Ad Age last night by Turner Sports. When asked how TNT’s make-goods efforts would proceed with the NBA out of the programming mix, a Turner Sports rep said: “We have a long-standing relationship with the NBA and we’re supportive of the actions being taken to help protect the health and well-being of everyone involved. We’ll partner closely with league officials to evaluate and determine next steps at the appropriate time.”

A sports TV buyer earlier today said that the only analogy that sprang to mind for the current NBA situation was a work stoppage caused by a strike or lockout—although in the case of a disruptive labor disagreement, the deadline is usually established well in advance. In the near term, clients who’ve bought time in the games set to air on the NBA’s Disney-owned networks are in greater need of relief; through the end of March, ESPN is on track to miss out on seven scheduled games, while sibling ABC will have to furnish audience deficiency units for its scrapped March 14 broadcast (Warriors-Bucks, in primetime) as well as a Rockets-Blazers matchup the following afternoon.

For its part, TNT stands to lose out on six NBA games, including tonight’s postponed doubleheader (Celtics-Bucks, Rockets-Lakers). The cable network also must make concessions for its wildly popular studio show, “Inside the NBA.” Where those targeted ad dollars might be re-deployed is anyone’s guess.

Speaking of which, “Inside the NBA” panelist Charles Barkley this morning called in to ESPN’s “Get Up” to make a case for the NCAA following the pros’ lead and canceling March Madness outright. (College sports’ organizing body on Wednesday announced that it would host the tournament in a series of all-but-vacant arenas; according to one conference official, no more than 125 to 150 spectators would be accommodated during each game, a select group that includes the athletes’ friends and family members as well as accredited media.)

“I think that my company’s got to bite the bullet,” Sir Charles continued. “I think the right thing to do is for us to honor our contract—'cause listen, if they do play these games it’s really just about they want that billion-dollar check. Let’s be realistic.”

Certainly the NBA suspension brings up some very serious questions about the NCAA’s moral responsibilities to its student athletes. If, out of an abundance of caution, the guys who are getting paid to play ball will not do so in the near term, is it right to expect the kids who suit up for free to put themselves at risk?

If there’s a bright side to be found in any of this, the NBA’s proactive measures seem unlikely to come at the expense of the playoffs, when it earns every penny of the annual $2.66 billion rights fee it collects from Disney and WarnerMedia. According to buyers, the average 30-second spot in the 36 first-round postseason games on cable fetched as much as $60,000 a pop, while ABC’s five broadcasts commanded upwards of $90,000 per unit. Games in each subsequent round earned even higher rates and, according to Kantar estimates, the six-night NBA Finals on ABC generated a sales windfall of $288 million.

In the unlikely event the NBA elects to dispense with the playoffs as well as the remainder of the regular season—at which point things will have become so unrelentingly grim on the viral front that most of us will have forgotten about basketball altogether—the losses would be fairly insupportable. According to MoffettNathanson analyst Michael Nathanson’s math, if the 2019-20 season never starts up again, the loss of ad revenue will cost Disney some $481 million, while Turner Sports would be out $168 million.

As advertisers and fans wait out the quarantine, the initial shock of Wednesday night’s announcement is only now starting to wear off. The surreal turn of events seemed to knock Dallas Mavericks owner Mark Cuban for a bit of a loop; speaking to ESPN’s Tom Rinaldi during the fourth quarter of last night’s Denver-Dallas game, the “Shark Tank” star said his first reaction to getting the news in his courtside seats was disbelief.

“This is crazy, this can’t be true,” Cuban said. “I mean, it’s not within the realm of possibilities; it’s just, it seems more out of a movie than reality.” By the midpoint of his brief chat with Rinaldi, Cuban had gained his composure, and the adrenaline surge he’d been riding out gave way to a sort of guarded optimism.

“This is the last game for who knows how long,” Cuban said. “But you know, this is much bigger than the NBA. When we talk about getting the season back on track, that will mean all this got worked out, right?”