MINNEAPOLIS (AdAge.com) -- Countless cable options, let alone smaller screens like computers and cellphones. The broadcast business model under assault. Two teams from relatively small markets. Add it up -- as CBS has -- and what do you get? The most-watched TV event of all time. 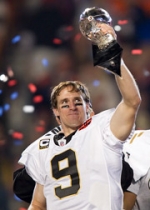 The network is also reporting that the post-Super Bowl premiere of "Undercover Boss" was hardly incognito, as the 38.6 million viewers made it the most viewed post-pigskin show since the 2001 "Survivor" season premiere.

Final Nielsen live-plus-same-day data should confirm the early estimates from the network, as well as ratings in the ad-centric adult 18-49 demographic. But for the prime-time portion CBS -- with the game itself, the post-game and the beginning of "Undercover Boss" -- had a fast affiliate rating and share of a 29.7/61.

The superb Super Bowl stats are just the latest in a string of ratings rises for big event programming, from the Emmy Awards, the Golden Globe Awards, the Grammy Awards, the CMAs and others that prove once again that network TV's crisis of confidence isn't an issue of the media model, but the media itself. With the right content, under the right conditions, broadcast can be as big as ever.

WHAT TO WATCH:
Monday: It's not even Valentine's Day, there are feet of snow in D.C. and yet a spring finale is upon us: "Heroes" ends its season (series?) run on NBC.
Tuesday: The airline industry better buckle up, as it's examined in the "Frontline" documentary "Flying Cheap," which looks at flying since the Continental crash in Buffalo.

WHAT TO WATCH FOR:
CBS's Monday night sitcoms have already hit season-highs several times already, and have the momentum of being promoted on the Super Bowl.