Here's how legalized gambling will make sports leagues even richer 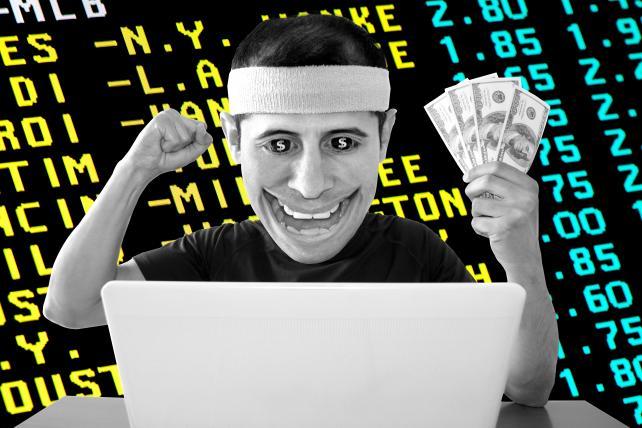 An anticipated boom in legalized sports gambling should not only prove to be a source of significant revenue for the NFL and its 32 franchises, but may very well help drive up the overall value of the league's media rights when they go up for bid in 2022.

According to a recent Nielsen Sports study commissioned by the American Gaming Association, NFL revenues directly related to the rise of regulated sports wagering could add up to around $573 million per year. This gaming-related haul includes estimates on incremental revenue in the form of TV advertising, sponsorships and data licensing.

Advertising buys from casinos and other betting operators are expected to make up the bulk of that new cash grab. According to Nielsen Sports, this newly-minted category of TV advertising has the potential to generate some $451 million per year, or nearly 80 percent of the overall take. Gambling-adjacent sponsorships could account for an additional $92 million in revenue, while data may kick in as much as $30 million per year.

While that all adds up to a nice chunk of change, the projected figure is dwarfed by the potential windfall headed the NFL's way as gambling begins to have a salutary impact on fan consumption. Nielsen's thesis is that, in a best-case scenario, the rapid spread of legal wagering will serve to boost both TV ratings and engagement with the NFL's already formidable brand, which in turn would embolden the league to jack up its media rights fees another 18 percent in 2022.

Based on a current annual outlay of $7.92 billion from the NFL's TV partners (CBS, Fox, NBC, ESPN) and alternative distributors DirecTV and Verizon, Nielsen projects that gambling could help inflate the value of the league's next round of media deals to around $9.34 billion per year.

As much as the legacy TV networks are sure to face some fierce competition from the FAANG crowd—in April, Amazon re-upped its deal to stream "Thursday Night Football" broadcasts to its Prime subscribers for another two seasons, at a cost of $130 million—NFL officials have intimated that the tech giants still don't seem to have the capacity to host a pro football-scale event. Speaking at an industry event in August, NFL Chief Media and Business Officer Brian Rolapp said there's been little evidence to support Big Tech's assertion that it can satisfy the league's top priority, which is to reach as many fans as possible.

"We can reach 25 million people [on broadcast TV], and I have not seen a live event on the internet that can serve 25 million concurrent users at a high quality," Rolapp said. "It's one of these things that will need to be resolved, because money is not the issue for these guys."

Live streaming accounts for just a fraction of overall NFL deliveries. Case in point: Amazon's simulcast of Fox's inaugural "Thursday Night Football" broadcast on Sept. 27 eked out an average-minute audience of 527,000 viewers, which works out to just 4 percent of the 14.4 million fans who tuned in via traditional TV.

Meanwhile, taking a much more comprehensive view of the sports media marketplace, PwC today issued its outlook for the sector through 2022. The PwC report projects that the North American sports market will grow at a compound annual rate of 3 percent across the four key segments (media rights, gate revenues, sponsorships and merchandising), improving from $71.2 billion this year to $80.3 billion in 2002.

Media rights, which became the industry's most lucrative segment just a year ago, are in line to improve from $20.1 billion to $23.8 billion over the next four years. As the PwC report observes, 2022 should be a banner year for sports media rights, as the NFL auction will coincide with negotiations for a new Major League Soccer package. Coming up for bid even sooner are the national TV rights to MLB and NHL games, both of which are set to go on the block in 2021.

The PwC report asserts that FAANG's increasing desire to secure top-tier sports rights deals should only serve to bolster an already vibrant marketplace. "The monetization of rights should remain strong through the beginning of the next national rights deal cycle, given increasing competition for rights among traditional broadcast intermediaries and emerging distribution partners," the report notes.

As is the case with Nielsen, PwC anticipates that legal gambling will pour millions of dollars in incremental revenue into the coffers of the major American sports leagues. One potential source of gambling-related revenue is the so-called "integrity fee" leagues such as the NBA look to collect from the sportsbooks as a means to defray the costs associated with monitoring compliance and making sure everything remains on the up and up.

"Assuming that a mature legalized sports gambling industry could generate an annual handle of $100 billion—in 2017, the total handle in Nevada alone was $4.8 billion—a 1 percent integrity fee would yield $1 billion to the leagues (and potentially collegiate athletics as well) to split. There is potentially a lot of money at stake," the PwC states.

Thus far, the states that have given the green light to legal betting have refused to implement integrity fees. And as much as top executives like NBA commissioner Adam Silver have insisted on being compensated with what amounts to a royalty from the sportsbooks, the league's recent deal with MGM Resorts International is structured on a data-sharing and sponsorship agreement and does not include a 1 percent service charge.

"We decided here, rather than sort of re-litigating the integrity fee, which is still being hotly discussed state by state, let's find an approach which is unique to us and where we both feel we're being fairly treated," Silver says of the NBA's proposed compensation structure.

The NHL signed a similar pact with MGM Resorts a week ago. The league also announced today that it has inked a multiyear deal making FanDuel an official sports betting partner as well as its exclusive daily fantasy sports partner.

While the NFL has been a staunch opponent of promoting casino gambling, the league relaxed its advertising restrictions shortly before the season began. In a nod to the inevitable changes to be wrought by May's landmark Supreme Court ruling, the NFL in August decided to allow casinos to advertise in pre- and post-game programming, if not within the games themselves, but they will not be allowed to promote their in-house sportsbooks during NFL shoulder programming.

Of course, long before the highest court in the land handed down its ruling on sports gambling, the NFL appeared to be coming to terms with the longstanding affinities between football and games of chance. In March 2017, the league gave Oakland Raiders principal owner Mark Davis the OK to move the franchise to Las Vegas. With a $1.8 billion, 65,000-seat arena set to be completed in summer 2020, the Raiders should be moved into their new digs in time for the fall season.

For all the league's ginger handling of the gambling issue, the NFL is no stranger to making the odd nod and wink to the fans whose principal interest lie in the point spread, the over/under and the money line. As the PwC report notes, for 12 seasons CBS's "NFL Today" featured Las Vegas bookmaker Jimmy "The Greek" Snyder, who managed to smuggle in his point spread picks via his very precise scoring predictions. If the Greek said he thought the Steelers would beat the Oilers 24-20, you were meant to bet Pittsburgh at -3.

Today the spirit of the Greek lives on in the gleeful, minimally camouflaged enthusiasms of sportscasters like NBC's Al Michaels and ESPN "SportsCenter" anchor Scott Van Pelt. As sports betting continues to grow, the NFL's TV product may slowly begin to reflect the shifting landscape. At any rate, a good deal more than four states will have to pull the trigger on legal sports wagering before we see something along the lines of a sponsored "Terry's Picks" segment on Fox's noon ET pre-game show.