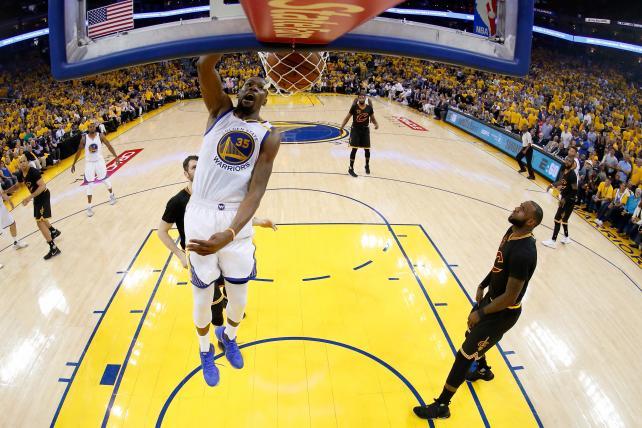 If a sort of looming inevitability seems to have cast a Kevin Durant-shaped shadow over the 2017 NBA Finals, the relative lack of drama thus far hasn't had a dampening effect on the TV ratings.

According to Nielsen live-plus-same-day data, the first two games of this year's Cleveland Cavaliers-Golden State Warriors title tilt delivered an average audience of 19.2 million viewers and a 10.6 household rating, up 4% from the year-ago 18.4 million viewers and up a tick versus last season's 10.5 rating.

Another 410,000 average-minute viewers have tuned in to the Finals via ESPN's streaming app, according to ESPN.

The series between the Cavs and Warriors, their third Finals matchup in three years, thus far is averaging a 7.0 rating in the adults 18-to-49 TV demo, which works out to a hair shy of 9 million people. By comparison, the first two games of the 2016 NBA Finals averaged a 6.9 in the demo.

Despite outscoring Cleveland by 19 points, Golden State's offensive juggernaut on Sunday night largely kept viewers tuned in until the final horn sounded. (With an average draw of 19.7 million viewers, Sunday's shoot-around was the most-watched Game 2 since 1998, when the retiring Michael Jordan and the Chicago Bulls beat the Utah Jazz in front of a national TV audience of 26.7 million fans.) Kevin Durant and Steph Curry combined for 65 of the Warriors' 132 points, which were the most buckets scored in an NBC Final since the Lakers hung up 141 against the Celtics back in 1987.

As was the case a year ago, the Warriors have blown out the Cavs in two consecutive outings to take a commanding 2-0 lead in the best-of-seven series. And while history suggests that the Cavs still have a puncher's chance -- after all, LeBron James and Co. last June became the first NBA team to rebound from a 3-1 deficit, earning Cleveland its major pro sports title since 1964 -- last year's Warriors squad didn't feature the lethal Durant, who already has 71 points to his name to go along with 22 rebounds.

So even though ABC is currently on track to put up the biggest NBA Finals deliveries since MJ's last hurrah, everything depends on Cleveland putting together another rally for the ages -- one that would be even more impressive. Golden State hasn't lost a single game since the tournament began in mid-April, and Durant and Curry are putting on a show that would make Jordan and Pippen proud.

As much as a sweep represents the unthinkable for ABC, the Warriors look like they may be the most dominant team since the 1965-'66 Celtics, the 1987-'88 Lakers or those Jordan-era Bulls. If Durant and Curry continue to dominate King James and his court, ABC could leave as much as $130 million in ad sales revenue on the table.

The series moves to Cleveland on Wednesday.