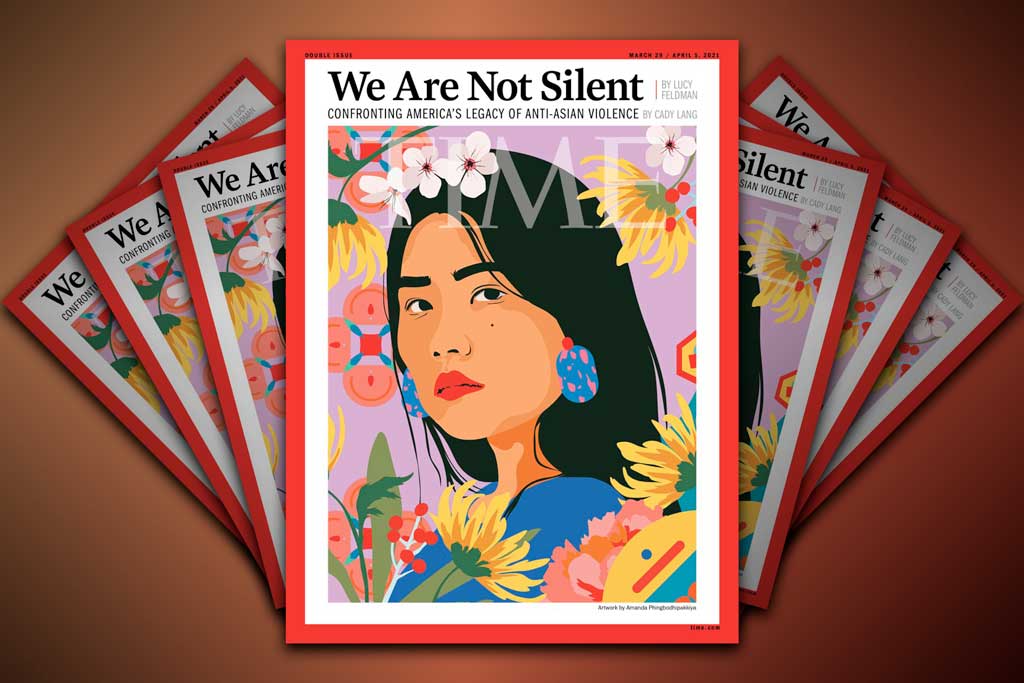 Time’s latest cover is a stunner; a vibrant, graphic artwork from artist Amanda Phingbodhipakkiya depicting a woman of Asian descent, surrounded by a multicolored array of flowers and looking fiercely at the viewer. The image belies the content within, which addresses the continued violence and hate crimes against the AAPI community, including the Atlanta shootings on March 16 that took the lives of eight people, six of whom were Asian women. The cover line reads, “We Are Not Silent.”

In Time’s story behind the piece, titled “We Are Not Silent,” Phingbodhipakkiya says the work “reflects the immeasurable strength of Asian American women who are the connective tissue of our communities, yet too often overlooked, fetishized, dehumanized and underestimated. My hope is to see the beauty of our people reflected in the colors of our communities in a dignified and respectful way.”

Time Photo Editor Sangsuk Sylvia Kang had pitched Phingbodhipakkiya to be considered for the cover. “I appreciated that many of [Phingbodhipakkiya’s] artworks featured generations of individuals and sought to depict diversity within the Asian-American population,” she said in the Time story. “It’s obviously a topic that means a lot to me personally and professionally.”

The cover image is an outtake from the “I Still Believe in Our City” project that Phingbodhipakkiya has been creating since last year as part of her artist residency with the NYC Commission on Human Rights. It debuted last year with an installation at the Atlantic Terminal in Brooklyn, New York, as well as in various locations around the city where incidents of anti-Asian bias have occurred.

Phingbodhipakkiya tells Ad Age that she has been updating the project regularly, including on Election Day. Come the Spring, it will branch out to an installation in the Financial District in partnership with the Department of Transportation, which will pair her work with statistics and stories translated into various languages, including Chinese, Korean, Vietnamese, Japanese and Tagalog to allow greater accessibility. There will also be an installation in New York’s Times Square.

“It’s so important to see ourselves,” she told Time. “It’s a way to say, despite what we have been through as Asian Americans, we’re still here. We don’t scare easily. We’re fighting every day for our shared future.”