Live sports accounted for 89 of the year's 100 most-watched broadcasts
READ THIS NEXT
Rethinking TV attribution: The full-funnel approach 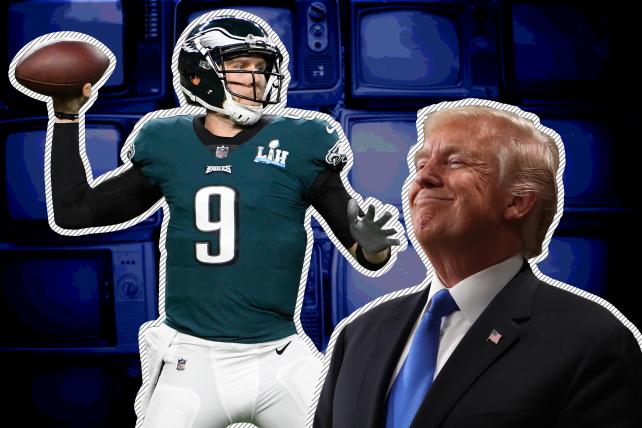 It turns out the likes of Tom Brady and Dak Prescott still have the requisite star power to light up the Nielsen servers. After two years of ratings declines, the NFL this season silenced many of the Chicken Littles by improving its overall deliveries by 5 percent, while providing further evidence that it remains the best investment for deep-pocketed advertisers.

In a year marked by two GRP-hogging quadrennial events and a whole lot of Beltway intrigue, NFL games accounted for 34 of the top 50 most-watched broadcasts, and 61 of the top 100. The only thing that came anywhere near to matching the NFL's hegemonic reach was the 2018 Winter Olympics; NBC's coverage of the PyeongChang Games drew six of the year's 50 largest TV audiences and 15 of the top 100.

All told, live sports generated 89 of the year's 100 largest audiences, with the NBA Finals, World Series, FIFA World Cup and NCAA Div. I Men's Basketball Championship filling in the gaps left behind by football and the Olympics. That left very little room for a scripted series to make its mark; indeed, once Trump-related news, award shows and swoony storybook British nuptials did their bit, only three slots remained for drama and comedy.

The year's highest-charting scripted episode, the Jack Pearson-snuffing installment of "This Is Us," was afforded the biggest possible lead-out. Airing in the wake of NBC's presentation of Super Bowl LII, the Kleenex-depleting episode averaged 27 million live-same-day viewers, retaining nearly a quarter of the 112.3 million fans who tuned in for the end of the Eagles-Patriots thriller.

In knocking off the family patriarch with a faulty pressure cooker, "This Is Us" drew scripted TV's biggest audience in seven years. Death played a supporting role in both cases; per Nielsen, the September 2011 season premiere of "Two and a Half Men"—which effectively killed off Charlie Sheen's character while introducing replacement Ashton Kutcher—scared up 28.7 million viewers.

Of course, "This Is Us" owes much of its Feb. 4 deliveries to its enviable surroundings. TV's top-rated drama among the adults 18-49 crowd, the show over the course of the calendar year averaged 9.28 million viewers in its Tuesday 9 p.m. time slot. By way of comparison, "Sunday Night Football" averages 19.2 million viewers per broadcast.

The other charting scripted episodes were the March 27 season premiere of ABC's ill-fated "Roseanne" reboot, which landed the No. 69 slot with 18.4 million viewers, and the Jan. 4 installment of CBS's "The Big Bang Theory" (No. 95, 16.2 million viewers). No need to read anything into the fact that the only two scripted series to draw a crowd in their regular time slots are either canceled ("Roseanne") or set to close up shop at the end of the season ("Big Bang").

Predictably, the NFL's broadcast partners appeared more often on this year's chart than those unaffiliated with the league, but the Olympics gave NBC the edge over its rivals. The Peacock earned bragging rights to 38 of the year's 100 most-watched broadcasts, topping Fox (25) and CBS (19). ABC, whose stewardship of big-ticket sports is limited to the NBA Finals and a single NFL Wild Card game, carried seven of the year's top 100 broadcasts, matching its cable sibling ESPN. TBS, which was home base for the 2018 NCAA hoops final, grabbed the very last slot on the list, edging an episode of "Big Bang" with an average draw of 16 million viewers for the Villanova's 79-62 blowout of Michigan.

Among the NFL teams that appeared in the top 100 with the greatest frequency were New England, Dallas, New Orleans, Philadelphia, Minnesota and Pittsburgh. The NFC continued to enjoy disproportionate representation on the ratings charts, as intra-conference games accounted for 34 of the year's most-watched broadcasts, while all-AFC meetings claimed 18 slots. AFC vs NFC showcases filled nine of the 100 top slots; naturally, the biggest draw among these was Super Bowl LII.

Among the 61 NFL broadcasts that charted in 2018, 25 aired in prime time. The vast majority of these were "Sunday Night Football" games on NBC, although three of Fox's "Thursday Night Football" broadcasts made the list and ESPN took the No. 91 slot with the epic Chiefs-Rams air war from Week 11.

As has been the case for more than a decade, the NFL's national Sunday afternoon TV window remained the most valuable chunk of real estate for advertisers. Per Nielsen, CBS and Fox together averaged 22.6 million viewers and a 12.6 household rating in the 4:20 p.m. ET window, which marked a 2 percent increase compared to last season's 22.2 million viewers and 12.3 rating.

Thanks to a strong schedule of highly competitive games (the average margin of victory on Sunday night was just 9.6 points per game, down from 12.9 in 2017), NBC this season nearly closed the gap with Fox and CBS. "Sunday Night Football" averaged 19.2 million viewers and an 11.0 household rating, improving upon the year-ago deliveries (18.2 million/10.3) by 7 percent.