ViacomCBS goes ‘all in’ on streaming, but without many of its top shows | Ad Age
Skip to main content
Sign In Register

ViacomCBS goes ‘all in’ on streaming, but without many of its top shows 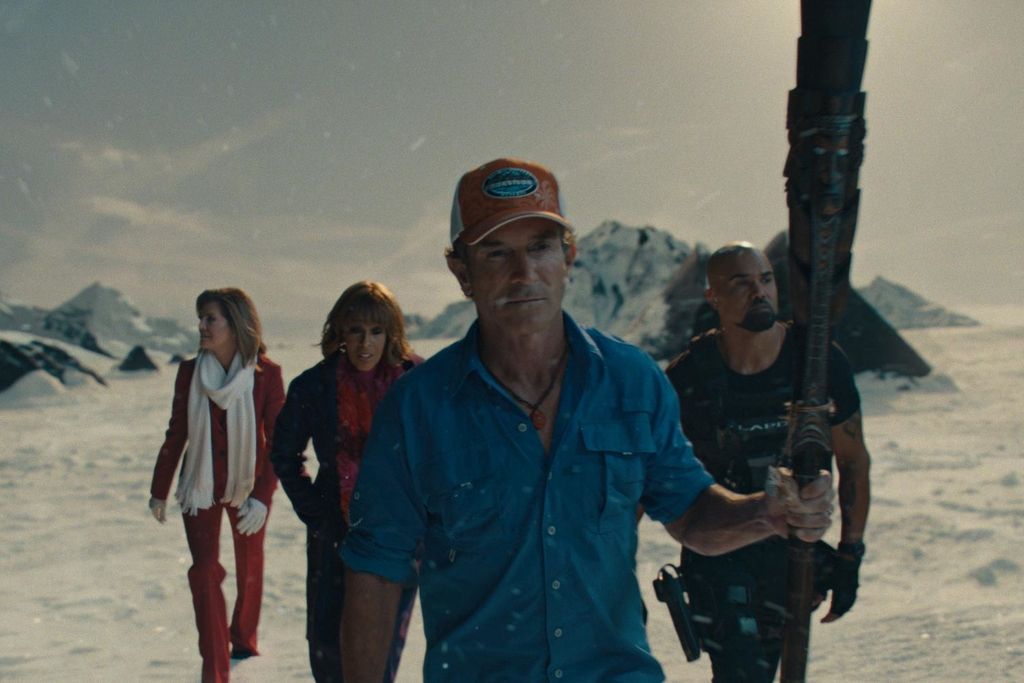 Not a day goes by that Bob Bakish doesn’t regret giving away “Yellowstone.”

The drama set on a cattle ranch in Montana is the most popular show ever broadcast on the Paramount Network, which is owned by ViacomCBS. But if you want to see the series on the internet, you have to go to another company. ViacomCBS sold the streaming rights to Peacock, a rival service owned by Comcast.

It’s all part of what Bakish, ViacomCBS’s CEO, dubbed an “arms dealer” strategy. As cable networks MTV, Comedy Central and Nickelodeon hemorrhaged viewers, Bakish offset falling advertising sales by selling the company’s crown jewels to the highest bidder. Over the past few years, ViacomCBS has licensed out “South Park” and “Chappelle’s Show” to AT&T’s HBO Max, sold movies including “10 Cloverfield Lane” and “The Lovebirds” to Netflix, and produced new hit shows for Netflix, Amazon and Apple.

But now, Bakish is trying to change course, or at least signal to Wall Street that a company built on TV networks can survive in a streaming world. ViacomCBS is overhauling its flagship streaming service, currently known as CBS All Access, and rechristening it Paramount+. The company will unveil details about the service at an investor day Feb. 24, prior to its release to the public March 5. But details have begun to trickle out, based on conversations with more than a dozen people with direct knowledge of the plans.

The company has commissioned a slate of dozens of original series, including shows inspired by movies “Flashdance,” “Grease” and “The Godfather,” as well as new versions of past hits “The Real World” and “Behind the Music.” ViacomCBS has tried to buy back the streaming rights to “Yellowstone” from Comcast. Rebuffed, the company has settled for a prequel to the show, ensuring fans will at least get a little bit of the frontier magic on Paramount+.

Top executives at the company know that catching market leaders Netflix and Walt Disney is out of the question. The service is the fifth or sixth to debut in the span of just a couple of years. But they hope to use populist entertainment, kids’ programming, news and sports to attract millions of new customers and overcome a decadelong malaise.

Once one of the largest media companies in the world, ViacomCBS is now a minnow compared with its competitive set. The largest paid streaming services in the market today are all owned by companies worth at least $200 billion. ViacomCBS is worth about $35 billion. Netflix has 200 million subscribers.  Disney+ has 95 million. All Access has a shade under 10 million. “They are in a scripted entertainment arms race with companies that are just so much bigger,” said Michael Nathanson, an analyst with MoffettNathanson. “They need to do something to attract more subscribers.”

In the years ahead, ViacomCBS will be a case study in how the cable-TV industry gave away its business to Netflix, and a test of whether the traditional media companies can carve out a home online.

Viacom built a cable network empire with MTV, Nickelodeon, Comedy Central and BET, catering to the young viewers who loved music, cartoons and comedy. But as streaming services Netflix, Amazon Prime Video and the now Disney-owned Hulu siphoned viewers away from the pay-TV universe, Viacom fed their growth by licensing hit children’s series from Nickelodeon, training an entire generation of kids to watch shows somewhere other than cable.

CBS Corp., a spun-off Viacom unit and the most-watched network in the U.S. for the majority of this century, was one of the last companies affected. Its older viewership remained more loyal to cable. But that didn’t stop the company from producing shows for all the services, needing the money from those sales to buy the rights to sporting events. Year after year, its network lost viewers. “They sold everything to Netflix,” said Michael Pachter, an analyst with Wedbush Securities. “They got addicted to the earnings stream.”

It was CBS, not Viacom, that was among the first media giants to venture into the world of streaming, introducing All Access in 2014. The company’s ambitions were modest at first. CBS released a few original shows in its first year, and didn’t secure the rights to NFL games nationwide until months later.

As the decline of the pay-TV business accelerated around 2016, big media companies began to step up their investments in streaming. Disney pulled back as many rights as it could to prepare for the eventual launch of Disney+.

But strategic decisions at both CBS and Viacom were on hold as their respective leaders fought with Shari Redstone for control of the companies. First Redstone defenestrated Viacom CEO Philippe Dauman, her father’s old lawyer. Then she ousted CBS chief Les Moonves, though only after he was accused of sexual misconduct by more than a dozen women.

By the time the two businesses merged anew in 2019, many other companies had lapped them in ambition, strategy and size. Believing ViacomCBS didn’t have the money to compete, Bakish went with the arms-dealer approach, willing to take advantage of demand for programming by selling to the highest bidder. All Access gradually ramped up its spending, but never hit the levels of its larger competitors. The service reached about 5 million customers in early 2020.

But investors have made it clear that they will reward media companies that are investing in streaming and punish those still beholden to pay TV. Shares in Disney have hit all-time highs thanks to the growth of Disney+, which has made investors overlook the closure of its theme parks and collapse of its theatrical movie business. “Companies have gotten the memo: You won’t get credit anymore for legacy assets,” Nathanson said. “It’s about, what are you doing to prepare for the future?”

About a year ago, Bakish pushed the company to think bigger and bolder with streaming.

Like many of its peers, ViacomCBS is now looking to Disney as a model, hoping to mine its existing library of popular programs for reboots, sequels and spinoffs. It’s already attempted this with “Star Trek,” the legendary space show that now exists as three different series, one of them animated.

The company has similar ambitions for “SpongeBob SquarePants,” the popular children’s show, as well as its stable of kids’ programs more broadly, and “The Real World,” the pioneer in reality TV. ViacomCBS is planning new versions of those shows, including a reunion of “The Real World” featuring cast members from past shows.

In a sign of just how much ViacomCBS wants to grow its streaming service, the company’s top executives have all been told to prioritize streaming above all else, devoting their biggest new shows to the service over cable. The Paramount Pictures movie studio is also exploring ways to reduce the window between when its new projects appear in theaters and online.

Bakish plans to lean in to two programming categories where Netflix and Disney aren’t dominant: news and sports. The service already offers live sports, and earlier this year secured rights to the UEFA Champions League, one of the most popular soccer tournaments. It’s also moving a version of “60 in 6,” a spinoff of the popular “60 Minutes” news show that it made for Quibi, to Paramount+.

The company believes it can stand out from the crowd by making what CBS chief George Cheeks calls populist programming. It wants to let HBO and Netflix compete for awards while it makes the kinds of shows that have made CBS the most-watched TV network for the better part of the last two decades.

Viacom had acquired the advertising-supported streaming service Pluto TV, and Bakish believes Pluto could be a funnel for new customers. He placed Tom Ryan, the head of Pluto, in charge of all of ViacomCBS’s streaming services.

And yet executives at ViacomCBS describe a company still debating its exact path. There have been discussions about folding BET+ or Showtime’s streaming service into Paramount+, but for now they will remain stand-alone services. The company hasn’t decided how much to invest in fields such stand-up comedy or documentaries, two areas of strength for Netflix.

“Is ViacomCBS all-in?” asked Rich Greenfield, an analyst with LightShed Partners. “How much are they throwing at it? How all-in are they? That’s the single biggest question investors are looking for.”

For all the company’s talk about focusing on streaming, it has had a hard time giving up on traditional businesses like licensing shows and releasing movies in theaters. Content licensing alone accounted for 23% of its sales last year, and the company continues to sell shows and movies to Netflix.

With theaters largely closed for the foreseeable future, ViacomCBS had to change its release plan for its movies. While many of its peers shifted titles to streaming, it has so far only moved one, “The SpongeBob Movie: Sponge on the Run,” of its 2021 movies to Paramount+. The studio offered many of its other titles to the in-house streaming service, but ended up selling Aaron Sorkin’s “The Trial of the Chicago 7” to Netflix and a movie about Billie Holiday to Hulu.

Leaders of the streaming business also passed on “Coming 2 America,” a sequel to the 1988 Eddie Murphy classic, believing they couldn’t sign up enough customers to justify the expense. The company then sold it to Amazon, which will release the film in March.

The deal made sense for Paramount financially. Amazon paid the studio $125 million for a project it can’t release widely in theaters anytime soon. But it also gave away a movie it thought would be one of its biggest summer hits, allowing a competing service to release the project and lure customers who might otherwise use Paramount+.