Virtual Reality No Game Yet Amid Developers' Wariness 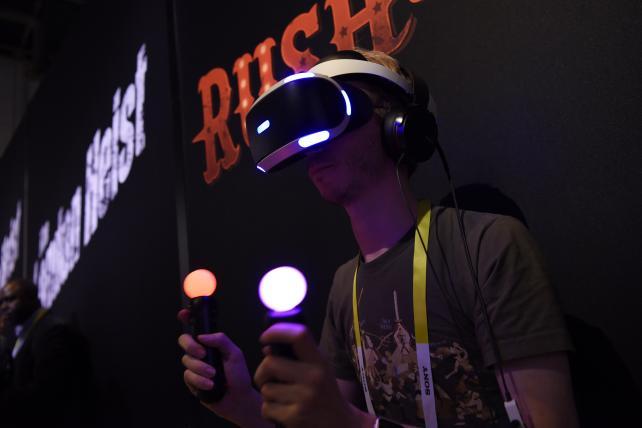 Virtual reality enthusiasts often say gaming will be the first big use for those odd-looking headsets that project you into imaginary worlds. They got a boost this week when Sony said it will start selling virtual reality goggles that pair with its PlayStation console for $399 -- less than rival products.

Even so, the world's best video game makers, Activision Blizzard, EA, and Ubisoft -- independent publishers that unlike Sony make only games instead of consoles and games -- aren't rushing into to the space.

They're waiting for a critical mass of users to buy headsets, and for the technology to improve and eliminate the pesky problem of motion sickness. The costs need to come down too: Facebook's Oculus Rift headset costs $629 and HTC's Vive $829. But as Gadfly's Tim Culpan has pointed out, both require users to own a powerful PC, so the real cost is even higher.

Few expect virtual reality to become a real business for the major videogame studios for several years. That's not good news for Facebook, HTC and Sony. They need good content to be available quickly so they can attract buyers for the headsets.

The games makers need to be careful not to stay on the sidelines too long. They risk falling behind the start-ups who are diving in now as well as Facebook and Sony, who are bankrolling developers of virtual reality games to seed the market for their headsets. Even Hollywood wants in -- Walt Disney and European pay-TV company Sky are playing around with adapting their content to the format.

It's similar to what happened with mobile gaming a decade ago. The big game publishers at first pooh-poohed mobile's low prices, rudimentary graphics, and weak storytelling, and chose to focus on their more-profitable business of making games for PCs and consoles. They let the mobile market -- which has since grown to $30 billion -- be won by newcomers. By comparison, annual sales of games for PCs total $29 billion and consoles $28 billion.

EA did make some middling mobile acquisitions, but still only 12% of its $4.3 billion in sales last year came from mobile. Activision waited and waited before splashing out $5.8 billion in November to buy Dublin-based King, the maker of the addictive "Candy Crush" game. The deal was cheap (King fetched less than seven times Ebitda) -- but it's not certain the games maker can keep cranking out the hits.

But the reticence of the big games makers does makes sense: They focus on the high end of the market, taking three years or so and up to $100 million to develop a new game. Their customers are willing to spend as much as $60 for Activision's fantasy-tinged "Destiny" game.

Some executives argue the virtual reality market will spawn cheaper, simpler games that can be developed quickly and sell for as little as $10. Samsung and Google are experimenting with simpler smartphone-based virtual reality, which could be the basis for the lower-end games. For the traditional games makers, the key will be developing a niche for premium games where they can still profit.

For now, Ubisoft and EA are hedging their bets. Both said this week that they'd make a game each this year for Sony's headset -- without detailing pricing. Ubisoft showed off its "Eagle Flight" game in which players fly over a deserted Paris cityscape. The company assigned just 10 developers to it, compared with the hundreds that it takes to build a traditional game like "Assassin's Creed."