E-cigarettes are getting their own version of the Virginia Slim.

The company is also introducing an accessory line to complement the ladies' first e-cig: a sterling silver charm necklace, leather smartphone/e-cig clutch and portable charging case. "There are a lot of e-cig users that don't obscure that they're using the product," said Adam Kustin, VP-marketing at VMR. "This gives them more of an opportunity to do it."

Selling gender-specific products is common among consumer brands, whether it's deodorant or cigarettes. Philip Morris (now Altria) introduced Virginia Slim cigarettes for women in the 1960s with the now iconic slogan: "You've come a long way baby." It was the "sister" cigarette to Benson and Hedges.

But Vapor Couture could also be a risky move. Other brands have faced criticism for pointless or awkward gender-specific products, including Bic's pens for women and Dr. Pepper's "Ten" soda for men.

Mr. Kustin said VMR conducted a survey to ensure it's "on trend," but admitted it won't know for sure until consumers vote with "their feet and their dollars."

"There's been an absence of negative reaction from the folks who have tested it out," he said.

VMR is the market leader in online e-cigs sales, according to a report last year from Bonnie Herzog, senior analyst at Wells Fargo. But its sales in roughly 40,000 brick and mortar stores lag behind that of the category leaders: Blu and NJoy. Mr. Kustin said sales of V2 e-cigs reached into the nine figures in 2013, with about 80% of its sales happening online.

Overall sales of e-cigarettes were expected to reach about $1.7 billion in 2013 and climb to $10 billion by 2017, according to Ms. Herzog's report.

VMR is among many companies in a crowded and unregulated e-cigarette market that is about to see Big Tobacco flex its muscle when the country's first and second largest tobacco companies, Altria and Reynolds American, respectively, introduce their own e-cig products nationwide mid-year. Lorillard, the third-largest tobacco company, bought the already established Blu brand in 2012.

But the category is currently unregulated, allowing traditional tobacco companies and pure-play e-cig companies to advertise on TV with celebrity endorsements and arguably cool images of people vaping. The federal government banned cigarettes ads from TV in 1970.

The Food and Drug Administration is expected to issue regulations on the industry soon. They could include marketing restrictions, age verification and a ban on flavors. E-cigarettes come in a variety of flavors from tobacco to chocolate, which anti-smoking groups say attract young people.

Vince Willmore, spokesman for the Campaign for Tobacco-Free Kids, said VMR's latest product is reminiscent of earlier tobacco brands like Virginia Slims and Camel No. 9. "This is more than a whiff of Big Tobacco's playbook; it stinks," he said. "It's completely reminiscent of marketing campaigns that have targeted young women and girls that were widely condemned." 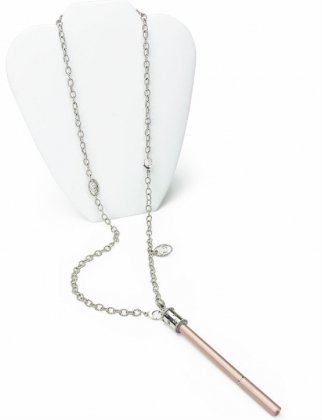 A charm bracelet to hold your Vapor Couture

E-cigarettes are believed to be healthier than tobacco cigarettes because they lack the tar and chemicals that can cause cancer. The products do contain nicotine, which anti-smoking groups have said can serve as a gateway to traditional smoking.

Mr. Kustin, however, dismissed the notion, saying VMR appeals only to adults, particularly current smokers. "Why would you try to attract an untrained consumer?" he asked, referring to young non-smokers. "You can appeal to people who already know how to use your product -- smokers."

"It's a page out of any well-informed classic marketer playbook," he added. "It's a smart thing to do to differentiate your product. We'd be selling ourselves short as marketers and innovators to try to have a one-size fits all strategy."

VMR looked to "brand mentors" for inspiration when creating Vapor Couture, according to Mr. Kustin. "Most of the work has been done by paying attention to market leaders in the fashion category," he said, citing Michael Kors as a strong influence. But non-fashion brands such Godiva chocolates also inspired the company because of the way it is presented to consumers, he said.

A splashy ad campaign won't accompany Vapor Couture. Instead VMR will promote its e-cig through point-of-sale tactics as well as blogger engagement.