Plus, Amazon pulls out of the Mobile World Congress
READ THIS NEXT
Uber and Lyft could abandon California, and QAnon hijacks a hashtag: Thursday Wake-Up Call 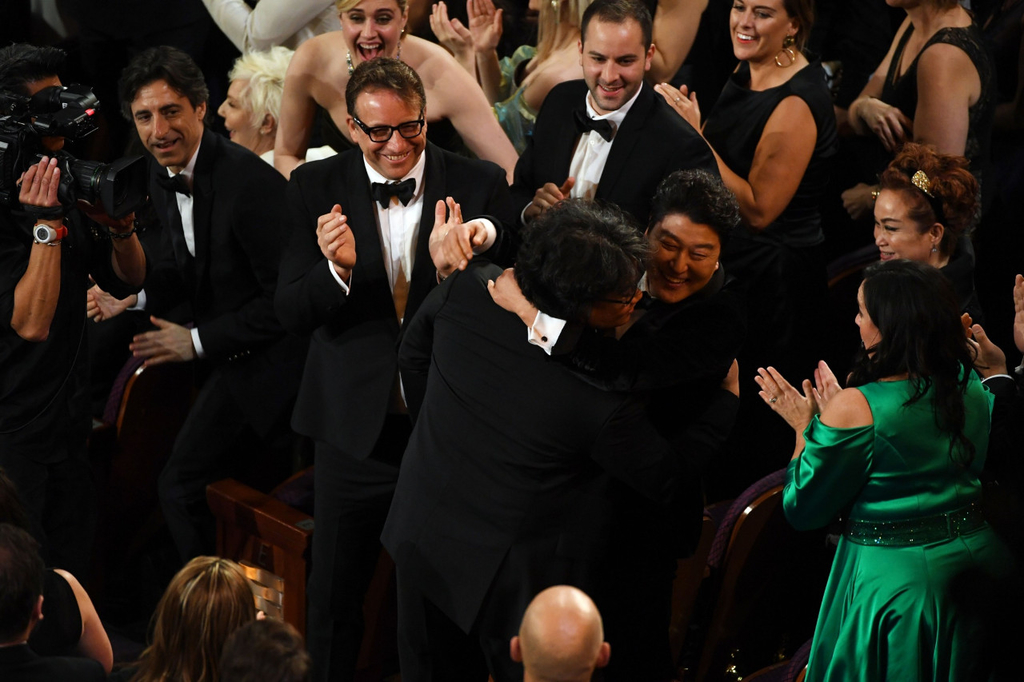 Advertisers flock to the Oscars
It was a good night at the 92nd Academy Awards for South Korean black comedy “Parasite,” which became the first ever non-English language movie to win Best Picture. And it was also a big night for advertising. Broadcaster ABC sold out of inventory for the broadcast last week and, as Ad Age staff reported, according to people familiar with deal-making, netted between $2.4 million and $2.6 million for a 30-second spot—up from $1.98 million last year.

While it’s not quite the Super Bowl, there were plenty of brands with spots created specifically to debut on Oscars night. They included the streaming platform Quibi, which, as Jeanine Poggi reports, used the awards show to build brand awareness ahead of its debut on April 6. Which, as Poggi points out, “is an interesting strategy for a service that is positioning itself to audiences who don't watch much traditional TV.”

Verizon aired four commercials that put the spotlight on women, LGBTQ and immigrants, featuring real Verizon customers. Poggi reports that the company also showcased its 5G technology by transporting people in New York City’s Times Square to the Oscars Red Carpet. Other advertisers introducing new creative included Adobe, with a colorful, mixed-media ad that depicts creativity “at work,” and, as Ann-Christine Diaz writes, features figures including Billie Eilish, who performed a haunting version of “Yesterday” during an "in memoriam" tribute.

Netflix loses out, Hulu could benefit
The night, dominated by “Parasite,” wasn’t a good one for Netflix, which received just two awards, for the documentary “American Factory” and for Laura Dern as best supporting actress in “Marriage Story." Its big Oscars hope, Martin Scorsese’s “The Irishman,” failed to win a single award after being nominated 10 times.

But the evening could spell good news for rival Hulu, which, as Bloomberg News reports, signed a deal with Neon, the U.S. distributor of “Parasite,” in 2017 to distribute its titles after their theatrical release. It was also a relatively good night for Sony, whose movies took home four awards, including for costumes in “Little Women” and a best supporting actor prize for Brad Pitt in Quentin Tarantino’s “Once Upon a Time... in Hollywood.”

Agencies guard against coronavirus
Amid the widening panic over coronavirus, advertising agencies with offices in China are taking measures to guard against the spread of infection. As Ad Age’s Ethan Jakob Craft writes, some agencies with a presence in China have cautioned their China-based employees who were out of the country when the outbreak intensified to stay put until further notice. Others, such as BBH and Mother’s Shanghai office, are giving staff additional time off or letting them work from home.

More U.S. marketers are also feeling the effects of the virus, including Yum China Holdings, which operates KFC, Pizza Hut, Taco Bell and other restaurants in mainland China, and has closed more than 30 percent of its restaurants. According to the New York Times, Disney also revealed in an earnings call that the closures of its theme parks in Shanghai and Hong Kong are expected to reduce the company’s operating income by $175 million in the second quarter.

Meanwhile, U.S. brands have now started pulling out of the Mobile World Congress in Barcelona, set to take place later this month. According to Reuters, Spanish media is reporting that Amazon is the latest, while the Verge reports that graphics company Nvidia, a sponsor of the conference, will also be a no-show.

In the driver's seat: Ford has promoted strategy chief Jim Farley to chief operating officer, reports the Wall Street Journal. Farley, who has been overseeing areas including electric vehicles, will now take on broader responsibilities, while the move potentially positions him to succeed CEO Jim Hackett.

Apple fined: Apple has been fined 25 million Euros ($27 million) in France for deliberately slowing older iPhone models without making it clear to consumers that updates would do so, reports the BBC. The fine was imposed by French competition and fraud watchdog DGCCRF, which said Apple had agreed to pay it.

Campaign of the Day: Away from the Oscars, another actor is making waves again in the marketing world. Ryan Reynolds—whose Aviation Gin spot featuring “Peloton wife” won him many admirers in advertising circles—is back, this time promoting his brand’s sponsorship of the Westminster Dog Show. As Ann-Christine Diaz writes, in a humorous film on Twitter showing him at the annual canine fete, Reynolds "stretches and preps as a pro dog trainer would, but as he bounds onto the show floor, we see that tethered to his leash is no bulldog or Cocker Spaniel. Rather it’s a lively, bouncy bottle of Aviation Gin." Plus, don’t forget to check out Creativity’s Top 5 campaigns from last week, including Seventh Generation’s inspirational climate change ad that aired right after President Trump's State of the Union address.