Starbucks Marketing Push for Via Begins With Taste Tests

CHICAGO (AdAge.com) -- Starbucks launches its first major advertising and marketing campaign Tuesday for Via, the instant-coffee product it spent 20 years developing. The marketer is tapping traditional and social media, and asking consumers if they can tell the difference between the instant variety and the brewed coffee that made it a household name.

The chain is expecting between 8 million and 10 million consumers to visit its 7,500 company-run cafes in the U.S. and Canada to participate in a taste test that runs Friday through Monday. Participants will receive a "thank you" card good for a free coffee on their next visit, and $1 off their purchase of Via at any Starbucks.

Part of the idea for the taste test, said Terry Davenport, Starbucks senior VP-marketing, came from the Chicago market, where Starbucks did its only advertised test of Via. While the TV ads led to a high level of awareness, consumers weren't motivated to visit stores -- so the brand created an event in hopes of spurring its faithful into action.

"Instead of selling something at them, we ask them to participate with us," he said. In so doing, "we're using the best weapon in our tool kit, one that on one else has, our store-level partners." Starbucks is sending its 4 million Facebook friends invitations to participate, with the anticipation that they will invite their friends. "It has a multiplier effect," Mr. Davenport said.

TV support begins Tuesday and will last through Monday, with heavy rotation in the morning. The 30-second spot builds on the chain's ads on "Saturday Night Live" last weekend, with disparate groups of people unable to tell the difference between the two types of coffee. Starbucks is also attempting "roadblocks" in major newspapers and has approached morning deejay teams in major markets to integrate a Via taste test.

The chain has foreshadowed this type of campaign since Via launched in test markets this March. Two of three Ad Age taste-testers at the time, inspired by Starbucks' bold words, tried but could not tell the difference. 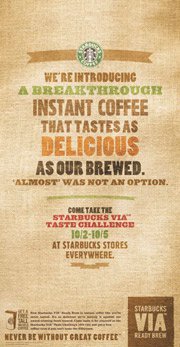 A print ad from the new campaign.
"I've been fooling people for almost a year now, at home, at the office. I make coffee for my wife almost every day," Starbucks CEO Howard Schultz said in a call with reporters. "I tell people this is the instant version of Starbucks brewed coffee and they're shocked."

Starbucks' agencies are BBDO for creative, PHD for media and Edelman for the company's outside PR.

Creating more 'usage occasions'
With this launch, Starbucks is expanding distribution of Via from test markets Chicago, Seattle and London to stores throughout the U.S. and Canada. In addition to its own cafes, Starbucks Via will now be sold in REI, Office Depot, Compass, United Airlines, Barnes & Noble cafes, and Marriott and Omni Hotels. Via will break in to mass grocery in 2010.

Mr. Schultz said that the chain is looking to create "additional usage occasions" for Starbucks coffee. The idea is that heavy coffee drinkers may have a cup of Starbucks on the way to work and a mug of swill once they get there. Starbucks sees additional opportunities with travelers and campers. Mr. Schultz initially defined instant coffee as a $17 billion market, but has expanded that estimation to $21 billion, based on updated international sales figures. Instant coffee is much more popular outside the U.S., making up about 40% of worldwide consumption.

While such a retail strategy seems unorthodox, it has worked for companies such as Red Box video, which rents DVDs outside supermarkets. Cranium, the popular board-game, grew its business by scoring distribution at Starbucks stores. Red Bull catapulted to prominence in part by its popularity as a mixer with vodka.

"All of those outlets make total sense," said Lynn Dornblaser, director-consumer-package-goods insight at Mintel International. "But that's not what a major market position should be, because it's only going to be a tiny, tiny percentage of consumers."

Starbucks acknowledged that another reason for holding off on mass grocery is ensuring that Via will be merchandised with other Starbucks products, and away from Nescafe. The Nestle product has mounted offensives in Seattle and Chicago, describing Via as a product that costs 400% more, or about $1 a packet.

Emily Bryson York
View all articles by this author