The building isn’t set up for people to remain a safe distance from each other, some employees say
READ THIS NEXT
Brands delay, rework Pride campaigns in light of George Floyd protests 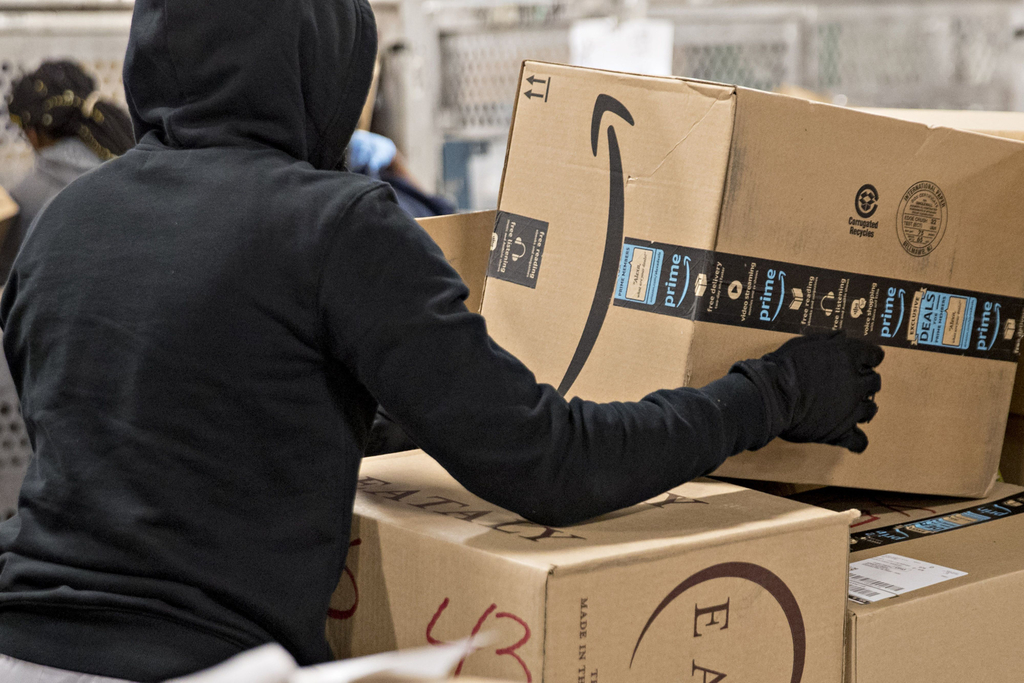 Amazon has extended the shuttering of a warehouse dedicated to returning apparel after three workers tested positive for COVID-19, the first known instance of the online retailer indefinitely idling a U.S facility in response to the pandemic.

The move comes after employees expressed concern that returning to work to process returned sneakers and wristwatches wasn’t worth the risk of contracting or spreading the respiratory disease.

Workers at the Shepherdsville warehouse, south of Louisville, Kentucky, had been told at a shift change Monday evening that the warehouse, called SDF9, would be closed for 48 hours for “enhanced, daily deep cleaning” to protect employees after the company was informed of positive coronavirus tests within the ranks.

Then, a few hours before the first workers were scheduled to return to work Wednesday evening, employees learned from an automated call that the facility would remain closed for more cleaning, according to four employees who received the call.

Workers will get their regularly scheduled pay, said the employees, who spoke on the condition of anonymity for fear of retaliation from their employer. They will be contacted once the company has determined an opening date, the message said.

As businesses across the U.S. shut down to slow the spread of the coronavirus, Amazon’s warehouses have taken a place alongside grocery stores, pharmacies and other essential facilities keeping their doors open during the pandemic. These companies are implicitly asking their employees to risk illness and the possibility of spreading the contagion to provide vital services. As part of that effort, Amazon last week cut off shipments of non-essential inventory to its warehouses to prioritize in-demand items.

But in addition to Amazon’s more than 100 multipurpose warehouses in the U.S.—which either stock small items like cans of soup or dry goods in interchangable bins or larger packages like bulk diapers, toilet paper and televisions—Amazon has also kept open a smaller number of specialty warehouses. The Shepherdsville facility is geared toward sneakers, watches and T-shirts. Other similar depots, spread across the country from Southern California to Georgia, can’t easily be repurposed to stock the essentials Amazon is prioritizing, according to people who track Amazon’s logistics network.

For some workers in Shepherdsville, the idea of reopening their warehouse for the sake of returns seemed dangerous. “I can understand if they’re doing medical supplies and food, but we don’t,” says an Amazon employee interviewed by Bloomberg News. “Does someone in quarantine really need these new shoes to wear around the house?” Some retailers, including Kroger and GameStop, have stopped accepting returns during the outbreak, while others have offered customers an extended return window so they don’t have to rush products back.

In an email to employees sent last weekend, Amazon CEO Jeff Bezos acknowledged the challenge facing hundreds of thousands of employees unable to join white-collar colleagues working from home during the pandemic. “We’re providing a vital service to people everywhere, especially to those, like the elderly, who are most vulnerable,” wrote Bezos, the world’s richest person. “People are depending on us.”

Amazon has said it’s following local public health guidelines for businesses that remain open during the pandemic. In some states that have ordered broad business shutdowns, such as New York, Amazon warehouses are exempted from closing orders because of their role in the nation’s supply chain.

Some businesses have shut down proactively anyway. General Motors, Ford and Fiat Chrysleragreed last week to idle their carmaking operations to protect employees. Boeing resisted calls to shutter its airplane manufacturing facilities until an employee in the Seattle area died after contracting the coronavirus. When a person in Kentucky became the first known Walmart employee stricken with the disease earlier this month, the world’s largest retailer said it deferred to state health authorities and opted to keep the store open after some cleaning.

Those steps haven’t prevented coronavirus cases from popping up in the company’s 800,000-strong workforce, in European countries hard-hit by the disease and, this week, in the U.S. Since Amazon temporarily closed a Queens, New York, delivery station following the disclosure that an employee had been diagnosed with COVID-19 last week, Amazon warehouse workers in at least eight other states—California, Connecticut, Florida, Illinois, Kentucky, Michigan, Oklahoma and Texas—have been informed of cases of the respiratory disease in their ranks, according to media reports and employees in those facilities.

An Amazon spokeswoman declined to respond to questions about the number of coronavirus cases in its warehouses or potential adjustments to facilities built to carry non-essential items.

“We have increased the frequency and intensity of cleaning at all sites, including regular sanitization of door handles, handrails, touch screens, scanners, and other frequently touched areas,” the company said in an emailed statement. Amazon, the statement said, has been consulting with medical experts and public health authorities on what measures to take after employees contract the disease. “Our process evaluates where the employee was in the building, for how long, how much time has passed since they were onsite, and who they interacted with, among other items, in determining whether we need to close.”

In interviews, 16 Amazon warehouse workers around the U.S. describe an atmosphere of fear. They says uncertainty about the spread of the new virus, mistrust of management and, sometimes, a coughing colleague nearby, fuel rumors about new cases. Some are working shorter hours or have stopped coming at all, taking Amazon up on its offer of unpaid time off without penalty through the end of the month. Many have started eating lunch in their cars rather than risk a trip to the break room.

Amazon, which aims to hire 100,000 people to help keep up with a surge in orders during an emerging nationwide quarantine, has tried to keep workers coming in with hazard pay in the form of a $2-an-hour raise and additional overtime compensation.

One Amazon warehouse worker in Staten Island says he and his colleagues were excited to earn the extra $2 per hour but that the mood abruptly changed Tuesday when they learned from a human resources representative that one of their colleagues had tested positive for COVID-19. He was scheduled to earn double-pay on an overtime shift, $40 per hour—a healthy bump over Amazon’s $15-an-hour national starting wage. Instead, he went home early.

The worker says he and his colleagues are packing a lot of household essentials like cleaning products but that customers are still ordering such non-essential items as video-game consoles and clothing.

“We’re selling everything,” he says.

Amazon hasn’t identified any of the sick warehouse employees but says, in each case, it informed those who came into close contact with them. The general manager of SDF9 told employees in the voicemail on Wednesday that Amazon was working to determine who might have come into contact with the sick employees during their most recent shifts, and “will begin immediately contacting those individuals per our guidelines.”

News of new cases has been filtering out to the workforce in sometimes haphazard fashion. Several employees say they heard of cases through automated voicemails or text messages that went out to all workers. But in Brownstown, near Detroit, one Amazon employee says she learned of her facility’s COVID-19 case on Facebook.

In a warehouse in Oklahoma City, workers arrived on Monday to find a building buzzing with word that a colleague had posted about a positive test on social media, one employee says. Human resources didn’t confirm that during their shift, however, and many employees left for the day to find a local news van outside. Amazon, employees says, has generally opted to keep those buildings open or to close them for less than a day so workers can clean the facility.

The exception so far is the Shepherdsville warehouse.

The facility, which a state economic development group says employs about 2,000 people, is built around a massive returns department, where employees, working back to back, open boxes to check whether a returned item coming off a truck matches the description of its condition on a computer screen. Further down the line, employees wipe shoes and clothes clean with alcohol and other cleaners. Managers this week pulled some employees off the line to give workers more space, an attempt to reconcile their close quarters with federal guidelines that people maintain six feet of distance to slow the virus’s spread. There’s also a small outbound department.

Before the sudden closing, managers had placed tape on the floor at six-foot intervals to encourage staff to avoid standing close together transmit the virus. Despite those measures, all 10 workers at the facility interviewed by Bloomberg News say it should remain closed.

The building isn’t set up for people to remain a safe distance from each other, they say. Some employees say cleaning materials like hand sanitizer and wipes have been hard to find on the floor. The facility shipped some of its own stock to a Whole Foods in the Chicago area, part of a triage effort that has Amazon warehouses around the country scrambling to acquire and distribute precious supplies.

One worker says she asked a manager during a shift earlier this week why people were reporting for duty at all. Kentucky Governor Andy Beshear had ordered all non-essential retail businesses to close their customer-facing facilities on Monday as the state’s count of coronavirus cases topped 100, and expanded that shutdown order on Tuesday to encompass all non-life-sustaining businesses. The Amazon manager had responded that customers expect quick service on their returns, she says.

The employee, worried about a family member at home with a compromised immune system, says she would have stayed away from work even if Amazon hadn’t opted to keep the facility closed.

“I’d better not bring this home,” she says. “I think customers would understand.”