Now, when you redeem American Express Rewards points, all your friends can know about it.

The financial services marketer, finding that many of its members like to brag about their reward redemptions, is making it easier for them to do so by creating a Facebook tab asking, "What's the most memorable thing you've picked up with Membership Rewards points -- great trip, cool gadget? Do tell!" The company also includes a deal of the week, such as 50% off the regular redemption rate for a Flip UltraHD video camera this week (at 12,400 points instead of 24,000).

The tab is one part of its new "Social Currency" campaign, in print and social media, that encourages customers to think about spending rewards points in less traditional ways. TV and online ads will follow next month, which continue the social-sharing theme by highlighting some of those clever rewards redeemers, with many of the stories gleaned directly from Facebook and Twitter posts, and include buying concert tickets online, electronics on Amazon.com, and trips to resorts around the world. 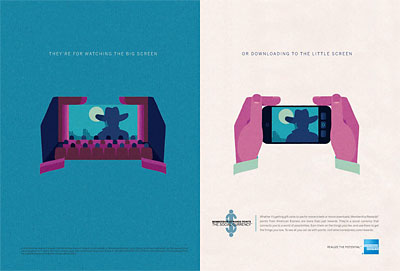 "It's a marker of savvy and a sense of pride for them," said Deborah Curtis, VP-advertising at American Express. "The perception is they're really in the know. ... The goal of the campaign is to get customers to use their rewards points in a way they wouldn't expect."

The social mindset expansion comes 20 years after the AmEx rewards program first bowed, and now offers more than 1 million rewards with more than 500 brand partners. But this is not the company's first social-media move. It inked a deal recently with Foursquare to offer special offers via location check-ins, and piloted the service this week at the South by Southwest Interactive Festival in Austin with a "spend $5, save $5" promotion at dozens of local merchants.

"In general, card members and consumers are looking for options and choices," said Ms. Curtis. "There's also education as part of this because they aren't aware of what they can do. Some of it is because of an entrenched way of thinking about rewards programs when it was heavily travel-based and people saved up points for a big trip."

The first "Social Currency" print ad appeared Tuesday in The Wall Street Journal, and will be followed by more on Friday in print, including The New York Times, Entertainment Weekly, Vanity Fair, ESPN and The New Yorker.

The April TV spots are slated for NBC, ABC, CBS and Fox network broadcast, and cable including CNN, Bravo and OWN. Digital ads on Hulu, Blip.TV and Brightroll, along with iPad ads in Vanity Fair, Marie Claire and Esquire magazine app editions, will launch along with TV.

Ms. Curtis said the creative executions in each would be tailored to be relevant to the audience. WPP's Ogilvy & Mather, New York, created the ads and sibling Mindshare is the media buyer; Publicis Groupe's Digitas is the digital media buyer.