Bud By the Numbers: Anheuser-Busch To Launch Zip Code-Branded Brews

In another sign that big brewers are starting to think small, Anheuser-Busch InBev is launching a series of Budweiser-branded brews named for the zip codes where they were created.

Called "Project 12," the effort began when brewmasters at 12 AB InBev breweries created their own small-batch "tribute" beers, each with a distinct style. The company pared the list to six beers that will be sampled this summer. Based on consumer feedback, the brewer will narrow the list to three beers that will be included in a limited-edition sampler pack hitting stores in the fall. 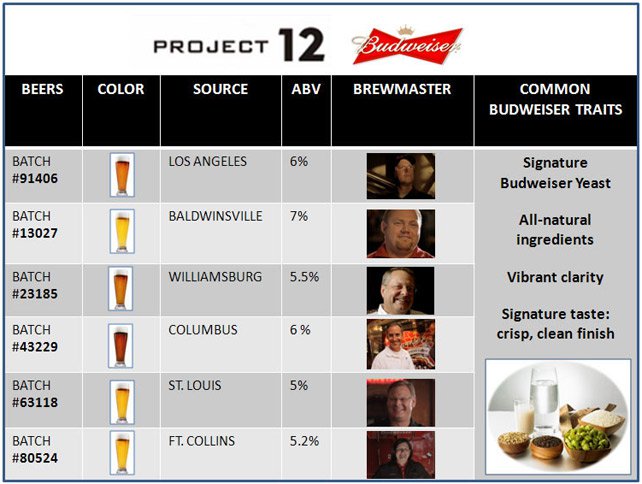 "Our objective is to allow our brewmasters to show some creativity, but the beers must fit the hallmarks the Budweiser brand is respected for, such as quality and consistency, and have a very crisp and clean taste," Jane Killebrew-Galeski, director of brewing, quality and innovation for Anheuser-Busch, the U.S. subsidiary of AB InBev, said in a statement.

The brews will be launched in August at private events at the 12 U.S. breweries featuring the brewmasters. The beers will also be sampled at "Budweiser Made in America," a two-day music festival the brewer is sponsoring Labor Day weekend in Philadelphia.

The initiative is another example of how big brewers are following the playbook of smaller craft brewers by spotlighting brewmasters and seeking to connect with local communities. MillerCoors, for instance, has begun showcasing Keith Villa, the creator of Blue Moon.

AB InBev has also toyed with creating beers labeled by airport codes, such as LAX and LGA, according to trademark filings. The brewer has not commented on the filings.