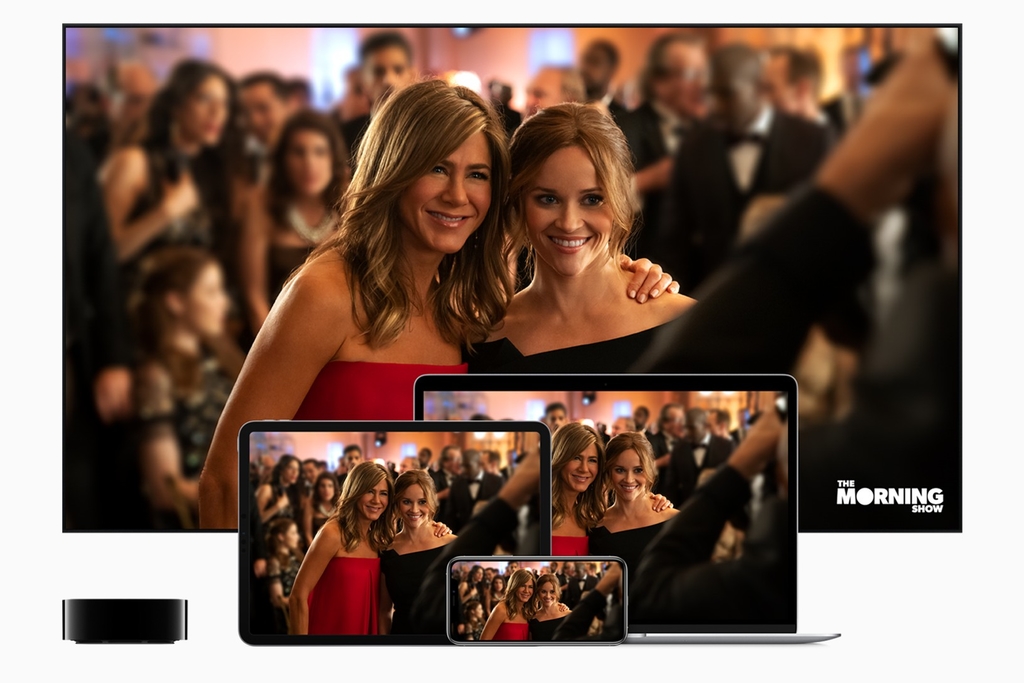 Apple TV+ is here
Apple’s new streaming service went live today, with original content including “The Morning Show,” starring Jennifer Aniston, Reese Witherspoon and Steve Carell as TV news anchors; “See,” a dystopian tale with Jason Momoa from “Game of Thrones”; and “Snoopy in Space,” which is self-explanatory. (Tagline: “The beagle has landed.”)

The latest entrant in the streaming wars is ad-free and costs $4.99 a month, but everyone gets a free 7-day trial, so it may be worth checking out even if you’ve read weak reviews. NBC News says the service has "mediocre shows and lots to prove," given competition from Disney+, HBO Max, Netflix and more. "The Morning Show" is Apple's highest-profile new show; The New York Times says it's well-cast and slick, but that “under the gleaming surface, as sleek and anodyne as an Apple Store, it is a kludge.” At least there's Snoopy.

‘Sundae, Bloody Sundae’
McDonald’s apologized for a Halloween promotion in Portugal that got a lot of negative attention beyond the small market where it appeared. The company ran a promo for “Sundae, Bloody Sundae,” or ice cream topped with strawberry sauce. It was a reference to the U2 song “Sunday, Bloody Sunday,” but the company apparently didn’t connect the dots to the historical event the song is about: 1972’s Bloody Sunday, in which British paratroopers shot and killed 14 people demonstrating for civil rights in Northern Ireland. The promotion attracted attention on social media, and the company told The Guardian it had been pulled. “The campaign was intended as a celebration of Halloween, not as an insensitive reference to any historical event or to upset or insult anyone in any way,” McDonald’s said, as reported by The Guardian. The company also apologized for causing anyone offense or distress.

Target vs. Macy's: A tale of two holiday ads
Target and Macy’s both released their holiday ads today, with two strikingly different approaches. Target has dozens of cheery spots from Mother New York; the anthem ad is set to a Sam Smith remix of “I Feel Love,” and is “jam-packed with products, including a sheepskin table runner, family pajamas and a ‘Frozen 2’ castle,” Adrianne Pasquarelli writes in Ad Age. Macy’s, meanwhile, worked with BBDO New York on a tale about a girl who wants to be Santa when she grows up. Pasquarelli writes: “Using longer, emotional content is not new to Macy’s ... The spots are less product-, price- and promotion-focused than that of other retailers Macy’s competes with.” Including Target. So which approach will sell more doll houses and fuzzy slippers?

Just briefly:
R.I.P.: Utah is getting rid of a Prohibition-era rule that limited sales of stronger beer brews. In Salt Lake City, the brand staged a “funeral” for 3.2 percent alcohol-by-weight beers that became a staple under the longtime rules. Read more by Ad Age’s E.J. Schultz.

For the record: According to Nielsen live-plus-same-day data, Wednesday’s World Series Game 7 on Fox “averaged 23 million viewers and a 13.1 household rating, making it the 20th most-watched broadcast of 2019,” Ad Age’s Anthony Crupi writes.

About Deadspin: A slew of journalists at website Deadspin resigned after their new owners, private equity firm Great Hill Partners, ordered them to stick to covering sports. Read why Ad Age’s Simon Dumenco thinks the meltdown was inevitable.

Today’s new made-up holiday: McCormick, the maker of spices, has proclaimed today the first-ever National Cinnamon Day. (Sorry McCormick, but we ate way too much candy last night to think about eating anything cinnamon-y today.)

Podcast of the day: In the latest edition of Ad Age’s Ad Lib podcast, Jarrod Dicker of The Washington Post talks about why his company has been building new advertising technology for publishers. “We are too beholden to just advertiser and subscriber revenue, and we’re completely out of our minds if we think that’s what’s going to be what carries us through the next generation of publishing,” he says. Listen to his conversation with Ad Age Editor Brian Braiker, and subscribe to Ad Lib on iTunes or Spotify.

Product of the day: McDonald’s Happy Meals turn 40 this year. And so it’s “bringing back some of its most popular Happy Meal toys in a nostalgic bid to drum up visits from families with young children—or collectors hungry to snag another Beanie Boo, Furby or Hello Kitty,” Ad Age’s Jessica Wohl writes. (Can we say 'no thanks’ to a Furby revival, though?)

To make sense of the changing landscape for publishers, media brands and advertisers, Ad Age is convening industry pros in Manhattan on Nov. 14 at Ad Age Next: Publishing. Learn more here.