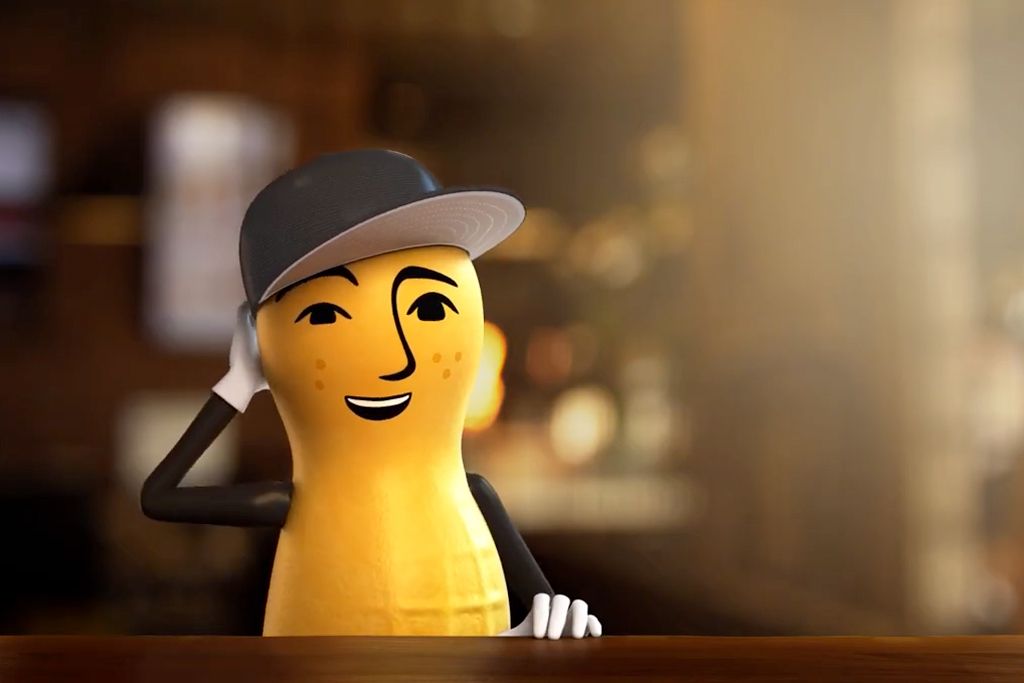 The marketing world and the prepackaged snack community were rocked by the revelation on Tuesday that Baby Nut is now a grown-ass man. As Ad Age’s Jessica Wohl reports,

The Baby Nut Planters spokes-legume introduced in February has reemerged, morphing from his infantile character into a 21-year-old. Starting Aug. 11 ... Baby Nut is transforming into ... Peanut Jr. Cue the tie-ins to brands that want to party with the legume now that he’s the legal drinking age in the United States.

The commercial introducing Peanut Jr. acknowledges the confusing development without really trying to resolve it, prompting all manner of questions and concerns. For instance, it’s unclear if Baby Nut/Peanut Jr.’s aging has been proportional or exponential.

If proportional—i.e., if he is aging steadily but rapidly by human standards (à la some peanut version of “dog years”)—then he should be about 63 years old in another year, and then by 2022 ... well, you get the idea. (The original Mr. Peanut was born in 1916 and lived 104 years, having apparently aged in approximate human years.)

The other possibility is that he’s aging exponentially—growing older faster and faster—which means he could hit 35 well before November and, who knows, maybe throw his hat (er, cap) into the ring of the U.S. presidential race, Kanye-style, presumably as a write-in candidate. But depending on the relative steepness of his aging-related decline, he might die—again!—before he could even take office, were he to win the election. Which would make his selection of a running mate all the more crucial to his campaign.

But we’re getting ahead of ourselves here. Just like Baby Nut.

Also on Tuesday, Joe Biden—in an apparent attempt to steal the news cycle back from Baby Nut—announced Kamala Harris as his pick for VP, which means it’s time for a flashback: “Kamala Harris attacks Joe Biden’s record on race in Democratic debate,” a short (1:38) YouTube clip from June 28, 2019, courtesy of The Guardian.

Wait for it! Now here’s the subhead: “But they can still advertise.” Budum-tish!

While we’re at it: “Facebook bans blackface and certain anti-Semitic conspiracy theories,” via Vox/Recode.

“LinkedIn on Tuesday said it’s removing COVID-19-related videos and posts for violating its policy on spreading misinformation,” Ad Age’s George Slefo reports in a post headlined “LinkedIn says it’s caught in a ‘cat-and-mouse game’ of COVID-19 misinformation.” The mouse in question is named Karen and refuses to wear a face mask, while the cat is just completely exhausted and ... totally over it, tbh.

You should click through and check out the masks in this post by Ad Age’s Ann-Christine Diaz: “Burger King prints orders on face masks so customers don’t even have to speak”—for instance, one reads, “A LARGE WHOPPER COMBO, FRIES AND A DIET COKE PLEASE.” Yes, the text on the masks is in all-caps, so you can effectively shout your order, just like Karen would.

Game off: “College football on the brink after Big Ten, Pac-12 scrap seasons,” per Bloomberg News (via Ad Age).

Cheers to the Class of 2020 inductees into the AAF Advertising Hall of Achievement (AHOA), whose names the American Advertising Federation has exclusively shared with Ad Age first. These folks will be honored “for their impact on the advertising industry” in a virtual ceremony on Nov. 18: