WASHINGTON (AdAge.com) -- Bayer Healthcare Pharmaceuticals is pulling a 60-second ad for birth-control pill Yaz. The move comes after the U.S. Food and Drug Administration expressed concerns that two ads for the drug go too far in suggesting the drug could help overcome PMS and acne. 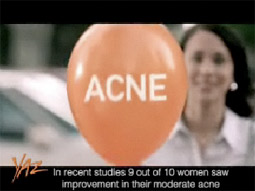 The FDA criticized this Yaz ad, 'Balloons,' which is still in rotation.
The FDA issued a warning letter to the company about the ads, created by Y&R. One of the ads had already been taken off the air.

The warning letter said that while Yaz had been approved as a contraceptive and a treatment for PMDD (premenstrual dysphoric disorder) and in some cases for acne, the TV ads could be viewed as suggesting the drug also remedied PMS and broader conditions of acne.

No clear distinction
The FDA cited the failure of an ad called "Not Going to Take It" to sufficiently distinguish between PMDD and PMS. The drug treats PMDD but isn't approved to treat PMS. The letter said the pictures of what it called euphoric, playful women singing "We're not gonna take it" as they kick, punch and push words describing symptoms such as "irritability," "moodiness," "bloating" and "feeling anxious" suggested that Yaz would treat PMS.

The FDA had similar criticism of a comparable ad still in rotation. It also said the acne relief mentioned in the ad overstates the drug's effect.

Bayer, in a statement today, said it will respond to the FDA's letter and work with the agency with regard to the other promotional materials in the campaign.