Google, Amazon Each Pump $2 Billion Into Global Ads And Promotion
READ THIS NEXT
Sephora plans dozens of new U.S. stores in bet on physical retail resurgence

Spending by the nation's biggest advertisers looks a lot like the U.S. economy as a whole: good, but far from great, and getting a nice lift from the technology sector and a resurgent auto industry.

The 100 Leading National Advertisers spent an estimated $104.5 billion on U.S. advertising last year, up just 2.8% from 2011, according to Ad Age DataCenter's analysis. That represented the lowest growth rate since the ad recovery began in 2010 and left total spending still shy of prerecession levels.

Check out the full LNA report and view Marketer Trees 2013.

Caution is the watchword as marketers -- forever under pressure to deliver results to Wall Street -- scrounge to save money where they can. For many, that means shifting to digital, trimming non-media portions of the ad budget or simply holding the line on ad spending.

Still, some industries have loads of market share up for grabs, leading to big investments by major players.

At the top of that list is technology, which scored the highest ad-spending growth among LNA categories, rising 13.6%, driven by fierce competition in the consumer-electronics space.

Samsung Electronics was in a galaxy all its own as it continued to battle Apple in mobile devices. It boosted 2012 U.S. ad spending 57.6%, the fastest growth among the 100 LNA, according to Ad Age estimates.

Amazon, part of the retail category, delivered the second-highest growth, with estimated U.S. spending up 46.6% as it promoted its Kindle offerings and its image as the one-stop shop for, well, everything. That surge pushed the e-commerce leader's worldwide ad and promotion spending to $2 billion in 2012, making it the second internet company to reach that threshold (Google hit it in 2011).

Automotive logged the second-highest growth rate among LNA categories as spending jumped 12.9%. The uptick was fueled by big increases from Japanese and South Korean automakers such as Toyota, Honda, Nissan and Kia. Ad spending mirrored sales, with U.S. light-vehicle sales rising 13.4% to 14.5 million vehicles in 2012, according to Automotive News Data Center.

The pharmaceutical category was a different story, as the patent cliff led LNA firms to cut U.S. ad spending 9.3% last year, the biggest decline among categories. Bristol-Myers Squibb (down 25.7%) and Pfizer (down 21.0%) had the biggest drops among the Top 100. 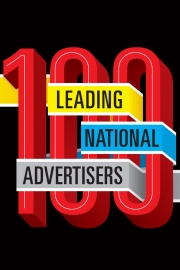 Those companies slashed spending as blockbuster drugs -- Plavix, co-marketed by Bristol-Myers and Sanofi, and Lipitor, marketed by Pfizer -- faced generic competition after patent protections ran out. Sales of Lipitor -- the nation's and world's No. 1 selling prescription drug in 2011 -- plunged to $3.9 billion in 2012 from $9.6 billion a year earlier. Pfizer cut its worldwide ad spending to $2.9 billion from $3.7 billion over that time.

Two-thirds -- 66 -- of the 100 LNA boosted their overall spending last year, with 31 double-digit increases. Three firms kept spending flat, and 31 reduced their advertising outlays. The proportions were nearly identical to 2011.

For 2013, overall spending growth is likely to remain in the low single digits for the 100 LNA. Total U.S. ad spending -- major media plus marketing services -- is expected to increase 2.5% in 2013, down from 3.4% in 2012, according to a forecast released last week by Publicis Groupe's ZenithOptimedia .

The tepid outlook reflects the equally uninspiring forecast for the U.S. economy. The Organization for Economic Co-operation and Development last month pegged U.S. GDP growth at a measly 1.9% for 2013, even with a hand from the housing recovery and surprisingly strong consumer sentiment. With that backdrop, marketers are looking for ways to economize, which is giving digital a big lift.

Exhibit A: Procter & Gamble Co., the nation's and world's biggest advertiser, which in fiscal 2012 spent $9.3 billion on worldwide advertising -- 11.17% of net sales. The company has said it will try to reduce that ratio 0.1 to 0.2 percentage points per year. "If there are good opportunities to generate high levels of return, we'll of course look to make those investments, but that should result in, ideally, a faster top line [revenue growth]," Chief Financial Officer Jon Moeller said this month at an investor conference.

In order to stretch the budget, "we're shifting a greater portion of media spending to digital, which offers a higher return on investment," Mr. Moeller said. P&G is "creating marketing campaigns that include social-media plans to maximize incremental earned media or free impressions." The company has also targeted non-media marketing spending for cost savings. "For example, we're developing fewer, bigger creative ideas that travel around the world, allowing us to produce fewer but better commercials," Mr. Moeller said. "We're also producing these commercials in lower-cost locations."

In comments to Wall Street analysts this month, Alan Batey, interim global CMO at General Motors Co., trumpeted the efficiencies GM is seeing after it in 2012 consolidated global creative for Chevrolet at Commonwealth, which is part of Interpublic Group of Cos., and GM's worldwide media account at Carat, part of Dentsu Inc.'s Aegis Media. "We went from 47 media agencies down to one," he said. "It's working really well."

At General Mills, Ian Friendly, exec VP and chief operating officer for U.S. retail, early this year touted its efforts to cut ""non-working expenditure' in media, things like ad production" and its shift into digital marketing. Digital is "a much more efficient approach for us," he told analysts.

But Jean-Paul Agon, chairman-CEO of No. 7 U.S. ad spender L'Oréal, probably could have been speaking for the full 100 LNA when he told analysts in April: "We are really improving the efficacy of our [ad] spending year-after-year, and it is partly also due to the fact that we are increasing the use of digital," adding that "digital will play an even more important role this year in terms of our spending."