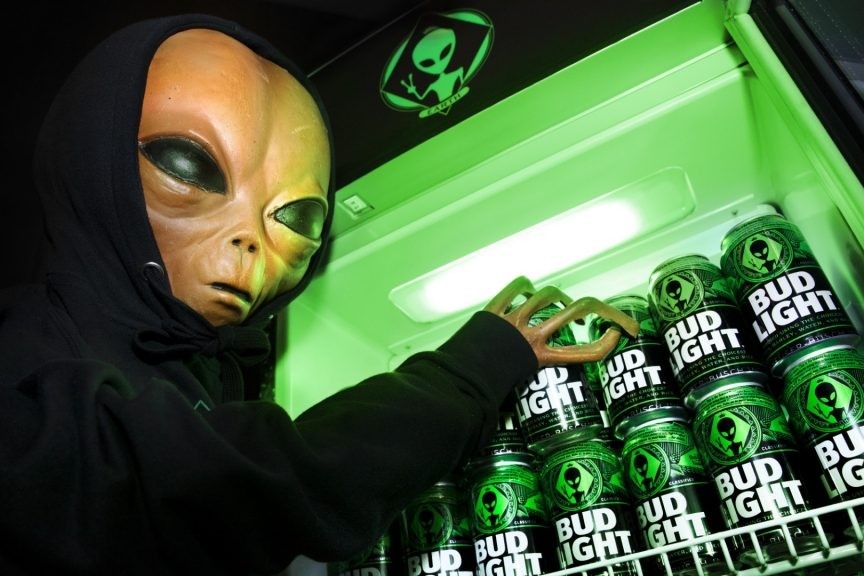 Whassup? Now take me to your leader
Bud Light is the official sponsor of the Area 51 Celebration happening in Las Vegas tonight, and the brand made extraterrestrial-themed beer cans for the occasion. It also has a fridge of beer stocked just for aliens, should any turn up. But let’s back up, because this requires some explanation. It all started with an internet joke urging a raid on the Area 51 military facility in the Nevada desert; legend has it that alien spacecraft are held there.

The joke “quickly grew into a potentially real thing (putting many, including the Air Force and the Federal Aviation Administration, on edge),” as Ad Age’s Ann-Christine Diaz writes. And now there are a few parties happening in Nevada instead; at one of them, Arby’s will hand out “Frying Objects,” aka fries.

To recap: A jokey meme about hunting for extraterrestrials led to plans for a potentially dangerous uprising, which turned into an excuse for parties, which opened up possibilities for corporate sponsorship. 2019 is wild.

A murky future for DirecTV
On a more serious note, AT&T is considering parting with its DirecTV unit, which it bought in 2015, The Wall Street Journal reports. The Journal writes:

“Jettisoning DirecTV would be an about-face for [Chief Executive Randall] Stephenson, who billed the acquisition of the company as a bold move to diversify beyond the wireless phone business and tap into a growing media industry.”

One possibility might be to spin off DirecTV, and another might be to combine it with rival Dish Network, The Journal says. In the streaming era, a satellite TV service isn’t what it once was.

Just say no
CBS, WarnerMedia and Viacom all say their channels will stop running commercials for e-cigarette brands such as Juul, CNBC reports. U.S. health officials have issued warnings about vaping after a spate of respiratory illnesses, and seven deaths, though it’s still not clear what exact product or products may be responsible. WarnerMedia, whose media brands include CNN, TBS and TNT, told CNBC that it will “continue to monitor the investigations by relevant medical agencies and may re-evaluate our position as new facts come to light.” (On an interesting side note: Ad Age’s Bradley Johnson points out that CBS once had corporate ties to tobacco. Loews Corp., then-parent of cigarette marketer Lorillard, was the largest shareholder in CBS before the media company was sold in 1995.)

Also: There was worse news for Juul this week. India just banned e-cigarettes amid concerns about youth vaping, and Juul products mysteriously disappeared from e-commerce shops in China. Both countries are home to over 1 billion people.

Just briefly:
Review: Kimberly-Clark is in the midst of a creative review for its global baby-care business, Ad Age’s Jack Neff reports. “Incumbent WPP, including longtime Huggies agency Ogilvy, is defending, with MDC Partners and possibly a third holding company in the mix,” he writes.

Sidelined: Three veteran NFL quarterbacks just got sidelined, and "the loss of Ben Roethlisberger, Drew Brees and Eli Manning could cause a shakeup in the Nielsen ratings,” Ad Age’s Anthony Crupi writes. The Pittsburgh Steelers face the biggest risk.

Tales from influencer-land: A Florida woman named Mikayla Saravia “has gained internet fame by elevating an unlikely asset: her tongue, which stretches an impressive 6.5 inches long,” The Cut reveals. She reportedly nets almost $100,000 a year.

Podcast of the day: Reddit has been attracting more ad dollars and brands like the NFL. Reddit Chief Operating Officer Jen Wong is the guest on this week’s “Ad Lib” podcast, hosted by Ad Age Editor Brian Braiker. Subscribe on iTunes or Spotify.

Ad of the day: A new PSA about school shootings starts off like an ordinary ad for back-to-school shopping, “with kids showing off their new gear, like a backpack and folders,” Ad Age’s I-Hsien Sherwood writes. “But the reality quickly turns dark. New sneakers make for a quick escape, and fashionable socks double as a tourniquet.” The video, which got widespread attention, is from BBDO New York and Sandy Hook Promise, the gun-violence prevention group formed after the 2012 elementary school shooting in Newtown, Connecticut. Sen. Kamala Harris of California, a Democratic presidential candidate, tweeted that the spot was “incredibly powerful.” She added, “We don’t have to accept this as normal.”