The Home of the Whopper is about to talk about everything but the classic burger.

In a campaign announced today, Burger King will use a host of expensive celebrities, including Jay Leno, David Beckham and Steven Tyler, to push salads, chicken snack wraps, smoothies, frappes and other menu additions in the hope of climbing out of a prolonged slump. If the menu expansion sounds familiar, it's because it is : McDonald's has offered many of these choices for years.

That's partly why Burger King is making such a splash with its launch, described as the biggest menu expansion in the chain's 58-year history. "The platforms themselves have been out for quite a while," senior VP-North America Marketing Alex Macedo told Ad Age , making a vague reference to his competitors. "The big challenge is how do you really grab people's attention? And most of all, how do you get them to taste the product?" he said. "We chose celebrities to get people's attention faster and to show the diversity that we have with our brand."

The agency is Mother , New York, which Burger King only recently added to its roster. The fast feeder also works with Dentsu's McGarryBowen, which came onboard last summer, replacing MDC Partners CP&B. Mr. Macedo said Burger King considered ideas from all its roster agencies, choosing Mother 's work because it liked the way the agency used celebrities in the spots, keeping the food as the star.

The campaign is a big get for Mother . Multiple spots will be backed with what Mr. Macedo described as the marketer's "biggest and most comprehensive media push," although he declined to detail spending. Burger King is also still working with McGarryBowen.

"Nothing changed really," Mr. Macedo said. "We have a great roster of agencies collaborating. Part of the reason for going to a roster of agencies [is ] we just have so much ... in the pipeline right now." But when asked what McGarryBowen is working on, he declined to provide details.

With the tagline "Exciting things are happening at Burger King," the campaign debuts with a spot featuring Mr. Leno driving through a restaurant in one of his classic cars and ordering some of the new items. In another spot, Mr. Beckham orders a strawberry-banana smoothie as a female cashier gazes lovingly into his eyes. In another ad, singer Mary J. Blige sings the praises of Crispy Chicken Snack Wraps. Mr. Tyler of Aerosmith, Salma Hayek and Sofia Vergara are also scheduled to make appearances. Check out the spots on Burger King's YouTube channel. 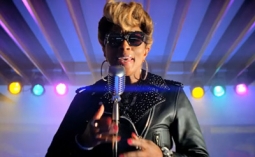 The menu expansion continues the chain's evolution away from focusing almost exclusively on young men. Under CP&B, that single-mindedness was pushed in advertising with a creepy King character lurking in unexpected places. While it got attention, sales later slumped, and Wendy's recently passed Burger King as the No. 2 burger chain. Under McGarryBowen, Burger King's approach became more product-focused and included a spot featuring extreme close-ups of the avocados, lettuce, tomato and onions in the "California Whopper."

This campaign is a "positive step forward," said Darren Tristano, exec VP at food-research group Technomic. Still, "it just might be too little too late because most consumers already know that McDonald's does all these things," he added. "It may be a lot harder to get a new initiative like this moving quickly."

The changes were based on months of research. "What consumers told us basically is , 'We love the Whopper ... but you guys have to catch up in some important product categories specifically salads, smoothies and wraps,' " Mr. Macedo said.

Denise Lee Yohn, an independent restaurant-marketing consultant who works for Burger King competitors, including Jack in the Box, criticized Burger King for "playing catch-up as opposed to trying to leapfrog the competition, which is really what they need to do at this point." Ms. Yohn said it seemed that the chain is "following McDonald's playbook almost to a T."