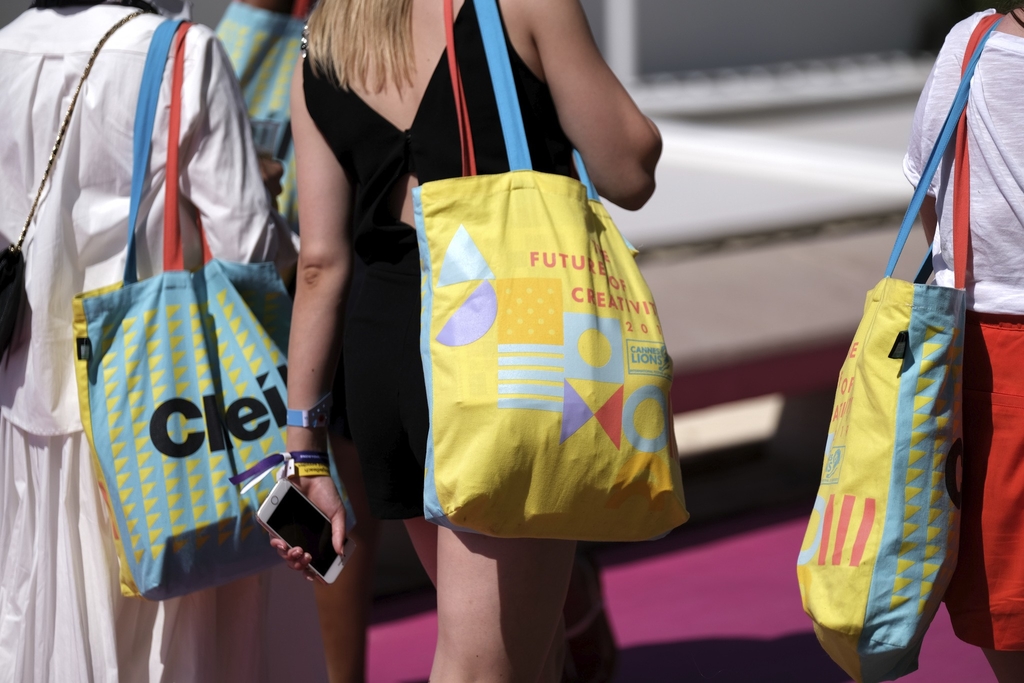 What people are talking about today
US Weekly magazine’s website is running an article on “the Best Dressed Stars of the 2019 Cannes Lions Film Festival.” Last time we checked, the Cannes Lions International Festival of Creativity was an advertising festival, non? But, whatever. As US writes, actress Kerry Washington “served up multiple killer looks, including a shimmery emerald green pleated gown with a lace cutout on her stomach.” There was obviously no need to mention all the ad execs wearing identical tote bags and accreditation tags.

Et finalement: Here’s our list of Cannes Grand Prix winners so far. And you can read more in our Cannes Nightcap newsletter, which includes a Naomi Campbell sighting on the beach.

L’eggo my logo
When Facebook announced its cryptocurrency this week, it also revealed some new logos, including one for a digital wallet, Calibra. And Calibra's circle-with-a-squiggle-in-it design looks extremely similar to the logo of an online bank called Current, which tweeted the two insignias side-by-side. “This is what happens when you only have one crayon left,” Current wrote.

“he used a San Francisco-based design firm named Character to create his start-up’s logo in 2016. That firm also worked on the secretive crypto project that Facebook unveiled this week, according to a LinkedIn post from Ben Pham, creative director at Character.”

Faking it
Google’s ad business isn’t growing as much as the company would like, and it’s been counting on Google Maps to help boost revenues. The idea is that it can run more ads from local businesses that want to be more visible to people nearby.

Now The Wall Street Journal reports on a surprisingly common scam: fake or falsely listed businesses, for lawyers, electricians plumbers and more. There are several reasons (in addition to outright scams from con artists) that someone might list a business at a fake address: “The false listings benefit businesses seeking more customer calls by sprinkling made-up branches in various corners of a city,” The Journal writes. Such schemes push legitimate businesses to buy ads, to compete better against the fake listings. It’s not clear exactly how big this problem is, but the Journal writes that a “search for plumbers in a swath of New York City found 13 false addresses out of the top 20 Google search results.”

Google’s response: In a long blog post, the company says it took down 3 million fake listings last year. Google implies that there’s not much news in the Journal story: “Local business scammers have been a thorn in the internet’s side for over a decade.” Which isn’t a reason to shrug this off.

Just briefly:
2020: “News sites from across the political spectrum are joining forces to form an ad-sales alliance to compete better with Facebook Inc. and Google as the 2020 election cycle heats up,” The Wall Street Journal writes. The alliance includes publications on the right (The Daily Caller) and left (AlterNet.)

#FreeDroga: In Cannes, indie agency Terri & Sandy is campaigning for funds so that Droga5, the no-longer-indie agency, can buy itself back from its new corporate owners, Accenture. (Droga5, unsurprisingly, declined to comment on the cheeky stunt.) Read more by Ad Age’s Ilyse Liffreing.

Out: “Alison Lewis has left her post as chief marketing officer of Johnson & Johnson Consumer Cos. as a result of what the company says is a change in its business model--one that apparently doesn't include having a CMO,” Ad Age’s Jack Neff reports.

Bye: REI, the outdoors retailer, “is discontinuing its print mail-order catalog and debuting a magazine,” Ad Age’s Adrianne Pasquarelli reports. It’s partnering with Hearst Magazines on the magazine, which will have a cover price of $4.95.

Podcast of the day: The NFL is loosening up its rules about beer ads, allowing active players to appear in them for the first time. But there are still a lot of restrictions, and Anheuser-Busch InBev’s Nick Kelly, who heads up the brewer’s U.S. sports marketing, talks about where he thinks this is going in the latest edition of Ad Age's Marketer's Brief podcast.

Awkward video of the day: “The 'Today' show celebrated 25 years in Studio 1A this morning with a video tribute that depicted proposals, highlighted celebrity visits, and completely ignored Matt Lauer,” The Daily Beast writes. The longtime host of the NBC morning show left in 2017 amid sexual misconduct allegations. Another former host, Ann Curry, was left out as well.

Advertising buzzword of the week: “Storyliving.” Apparently, this made-up word was uttered onstage at Cannes (as in, “Connecting with #GenZ is about harnessing storyliving, not storytelling.”) Then it got picked up by the Ogilvy Twitter account, and people started laughing about it. Thursday's edition of the Ad Age Cannes Nightcap newsletter rounded up some of the best reactions, including: