Deutsch Goes to Dogs For Halloween

Fifteen new recruits strutted through the Deutsch office in New York today. They were hairy, spent the day on all fours and a few even cross-dressed.

The agency's inaugural Halloweenie Costume Parade was full of puppy love as Deutsch employees dressed up their dogs and brought them into the office as part of a fundraiser for the Animal Alliance of NYC. The costumes ranged from Robin Hood and a Woolly Mammoth to a cheerleader and a bunch of grapes.

The idea for the costume parade came from Creative Coordinator Beth Armstrong, who threw the event together in about a week's time. Deutsch has a pet-friendly policy, so owners are constantly bringing their furry friends to work. Ms. Armstrong's pet Puddy is a rescue dog, one of five rescues present at the parade. She said she wanted to do something that was both festive – Puddy came as Bark Vader and Ms. Armstrong was Leia from "Star Wars" – and philanthropic. 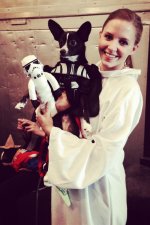 The Force was with Ms. Armstrong and Puddy

"I thought, why don't we make it to help all the dogs that need love?" she said.

Deutsch asked employees for donations and set a goal to raise $5,000 for the Animal Alliance of NYC. The 450-employee office was at 40% of goal by stepoff. Two representatives from the Alliance came to support the parade and spoke of how animal euthanasia at shelters around New York has declined 50% in the last 10 years.

Like most pageants, there was a bit of drama.

Best of show
Dennis Warlick, VP-strategic technologies, intended to bring his two dogs, Isabella and Paulie. But Isabella ate something bad Tuesday night and was too sick to join the party. Paulie valiantly cross-dressed in Isabella's costume of a ladybug, and even though he wasn't too keen on coming to Deutsch alone, Mr. Warlick said Paulie put aside his apprehension to support the LGBT community at the agency. 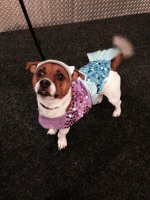 Best in Show votes came in at the end. The winner? Producer Jillian Cornette and her dog Sophie, who dressed as spaghetti and meatballs.