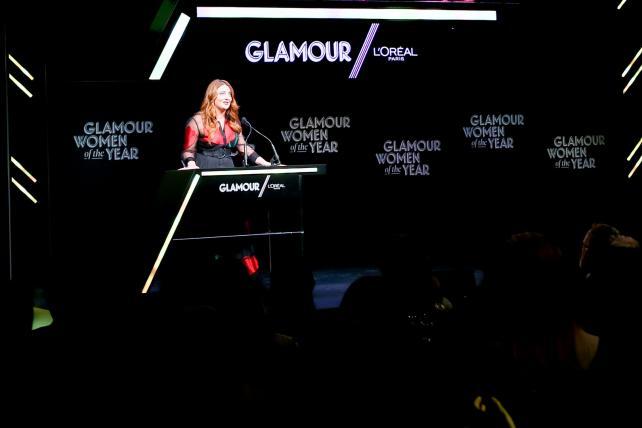 What people are talking about today
Glamour, long a mainstay in Condé Nast's magazine business, will end regular print publication to focus on digital. And while there will be special issues occasionally, this means another title is basically turning the page on print. The New York Times writes that Glamour still has about 2.2 million paid subscribers, but the move is "part of a general belt-tightening at Condé Nast, a company that was known for its lavish offices and generous pay packages back when its publications were so stuffed with ads that readers had trouble finding the articles."

Just days ago, Hearst said it would stop publishing Seventeen in print, aside from special occasions. The magazine business is hard, the world is evolving, and print is old school. The news probably shouldn't surprise us. But still. As EW's Dana Schwartz tweets, "Seventeen and Glamour both shutting down print publication in the same week feels like my teenage self is getting a golf club to the back of the knees."

You're in the army now
Omnicom Group's DDB just won the coveted U.S. Army account, beating out WPP. The win is for "a full array of advertising and marketing services" for a five-year base period, with a possibility of reaching 10 years, as Ad Age's E.J. Schultz and Megan Graham write. There's been a lot of drama around this review. McCann Worldgroup was the incumbent but was eliminated from the running earlier this year, and it's fighting that decision, recently through the U.S. Court of Federal Claims. What's at stake here? While it had the account, McCann was said to be taking in $30 to $40 million a year from it, as Ad Age has reported.

Back on the scene
Erin Johnson, the former J. Walter Thompson chief communications officer, has a new job with music messaging startup Gifnote, Megan Graham writes in Ad Age. In 2016, in an episode that seemed to prefigure the #MeToo movement, Johnson brought a sexual harassment lawsuit against Gustavo Martinez – then CEO of JWT – alleging he had made racist, sexist and anti-Semitic comments. (Martinez denied the allegations.) JWT's parent company WPP settled the suit this year, and Johnson resigned in April, leaving her open for new opportunities. Gifnote's CEO Andy Blacker said in a statement that Johnson, the company's new chief communications officer, is "highly respected as a strategic communications leader and we have long admired her work and integrity."

Issues
Facebook and Instagram suffered an outage on Friday, and there were glitches on Facebook's ad-buying system too – inconvenient timing given the proximity to the annual Black Friday shopathon. A Facebook spokesman told Bloomberg News that "advertisers may experience issues creating new campaigns and making changes to existing campaigns." One digital strategy manager tweeted: "Facebook has been down before, but I've never seen Ads Manager out of commission for an entire day and as bad as it has been today." Someone else tweeted a GIF of a man banging his head against a wall.
In other Facebook news: CEO Mark Zuckerberg recently found a moment to weigh in on the issue of naked photos: He's "considering loosening Facebook's strict no-nudity policy if artificial intelligence can be trained to handle au naturel posts," Garett Sloane writes in Ad Age.

Another new boss: "Nielsen Holdings appointed David Kenny as chief executive as the ratings and data giant continues to review its strategic options amid activist pressure to either sell or spin off parts of its assets," The Wall Street Journal writes. Kenny was senior VP of cognitive solutions at IBM.

Macy's parade: "Even as 160-year-old Macy's is struggling to remain relevant to digitally minded shoppers, the retailer's Thanksgiving Day parade has not missed a step," Ad Age's Adrianne Pasquarelli writes. Forty brands are taking part, up from 35 a decade ago.

Not so surprising, really: "Amazon is bidding for all of the 22 regional sports TV networks that Disney acquired from Twenty-First Century Fox," CNBC reports.

"The real-life Peggy Olson": Jane Maas, a copywriter and advertising trailblazer known for her work on the "I Love New York" campaign, has died at 86, Judann Pollack writes in Ad Age. A few years ago, Maas reminisced about being a woman in the postwar ad industry: "We couldn't work on financial accounts because [men thought] we couldn't balance a checkbook," she told Ad Age at the time.

Ad of the day: Apple's holiday ad for 2018 is the animated tale of a shy young woman who hides her creative gifts because she's afraid of sharing them. The message, as Alexandra Jardine writes in Ad Age, is that "Apple's technology gives you the means to get out there and start creating." The soundtrack is a lovely tune by 16-year-old singer-songwriter (and Mac user) Billie Eilish. Watch it here.

If you made it this far: Happy Thanksgiving. Wake Up Call will return after the holiday. But if news breaks, you will find it at AdAge.com. Meanwhile, take a trip back to 1940, when Thanksgiving was ever-so-briefly "Franksgiving."