Sold in the U.S. for decades, Jägermeister could be found in most bars but never on TV. That changed this month when the imported German cordial took the plunge, breaking the first TV ad in its history.

"We felt that it was important to speak to our core consumer [of 21- to 29-year-old men], and in order to do so we needed to have a presence on television," said Amanda Blanco, brand manager for Jägermeister and VP at Sidney Frank Importing Co.

In doing so, Jägermeister followed what lately has seemed like a stampede of liquor brands to TV as marketers seek broad awareness for product launches or to build new buzz on old brands.

One reason for the new interest is that broadcast networks have loosened their rules, creating more opportunities for national buys. CBS, for instance, began accepting liquor ads during late-night programming within the last year. ABC has been taking hard-booze during "Jimmy Kimmel Live" for several months. And this spring, NBC began accepting spirits shows airing after 11 p.m.

Eastern as long as 90% of the audience is of legal drinking age. (Industry self-regulations allow beer, wine or liquor ads only on programs where at least 71.6% of the audience is 21 or older.) More broadcast deals are "in the works," one industry insider told Ad Age .

TV grabbed $142 million in advertising from liquor brands in 2010, or about 34% of all media spending by the category. That's up from $102 million and 23% just five years earlier, according to the latest data available provided to Ad Age by the Distilled Spirits Council of the U.S. (Discus), a liquor trade group. Magazines led with a 41% share, though that was down from 58% in 2005.

Liquor brands' TV spending fell to a little more than $141 million last year, according to Kantar Media. But it seems poised to grow again in 2012 as a host of products roll out TV campaigns, from Skinnygirl Cocktails to Wild Turkey, a 157-year-old bourbon brand that this month introduced its first TV spot, "Give "Em the Bird."

Liquor ads did not appear on any TV, national or local, for much of the 20th century, with the industry honoring a self-imposed ban from 1948 to 1996. Crown Royal, then owned by Seagram, broke the seal that year with a spot that aired in Corpus Christie, Texas. A growing number of TV affiliates have begun taking ads in recent years, and marketers have found more opportunities on cable networks such as Comedy Central, E! and ESPN. Cable still gets more than 90% of the spending, according to Kantar.

But the new acceptance from broadcast networks is a victory for the spirits industry, which has sought parity with beer and wine since it lifted the ban.

"Just as the federal government doesn't distinguish between beer and wine and spirits, [so] most of these broadcasters are recognizing that alcohol is alcohol," said Frank Coleman, senior VP of Discus.

TV is benefiting from aggressive innovations as marketers seek awareness on fresh offerings such as flavored whiskeys and other line extensions.

"The way to talk about a new product broadly and uniquely is TV, because it's efficient," said Kevin George, chief marketing officer at Beam Inc. And marketers are moving to TV even as they spend more on digital.

After pulling most TV advertising a few years ago, Beam is back in strength. It's dedicating 43% of its brand investment to TV in 2012, up from 34% last year. In the past year, Beam has put five brands on TV for the first time, including Maker's Mark, which launched a campaign last year on Discovery Channel paired with digital content on discovery.com. The buy was expanded this year to TNT, TBS, TRU and the History Channel.

Later this month, Beam will introduce its first TV campaign for Skinnygirl, a lower-calorie, ready-to-serve cocktail line, including offerings like White Cranberry Cosmo and Margarita.

Diageo-owned Captain Morgan rum was the biggest liquor TV advertiser last year, spending $17 million, according to Nielsen. (That's still a far cry from the nation's biggest beer brand, Bud Light, which spent more than $230 million on TV in 2011, according to Kantar Media.) The campaign, which launched about a year ago, put the iconic character on TV for the first time, casting him in the 1600s as real-life privateer Captain Henry Morgan.

While the effort includes plenty of digital, "TV was a great place to launch that idea and tell the story in a compelling and visually stimulating way," said Diageo spokesman Dan Sanborn. In a move to reach more Hispanics, the marketer made a major upfront buy last year on Univision Communication's Galavision cable network for brands such as Ketel One and Johnnie Walker, as well as on every Univision-owned and -operated station. Diageo expects to continue the relationship this year.

Even brands that swore off TV are back.

Take Brown-Forman's Southern Comfort. It moved to an all-digital strategy in 2009, telling Ad Age then that it was having a hard time breaking through the spirits brands crowded into a few nightly cable shows. But SoCo returned to TV in 2010 and 2011 to launch lime- and pepper-flavored versions.

The brand's TV investment will grow this year, a spokesman said, because "we've seen increased consumer response during the time periods when we are on air." 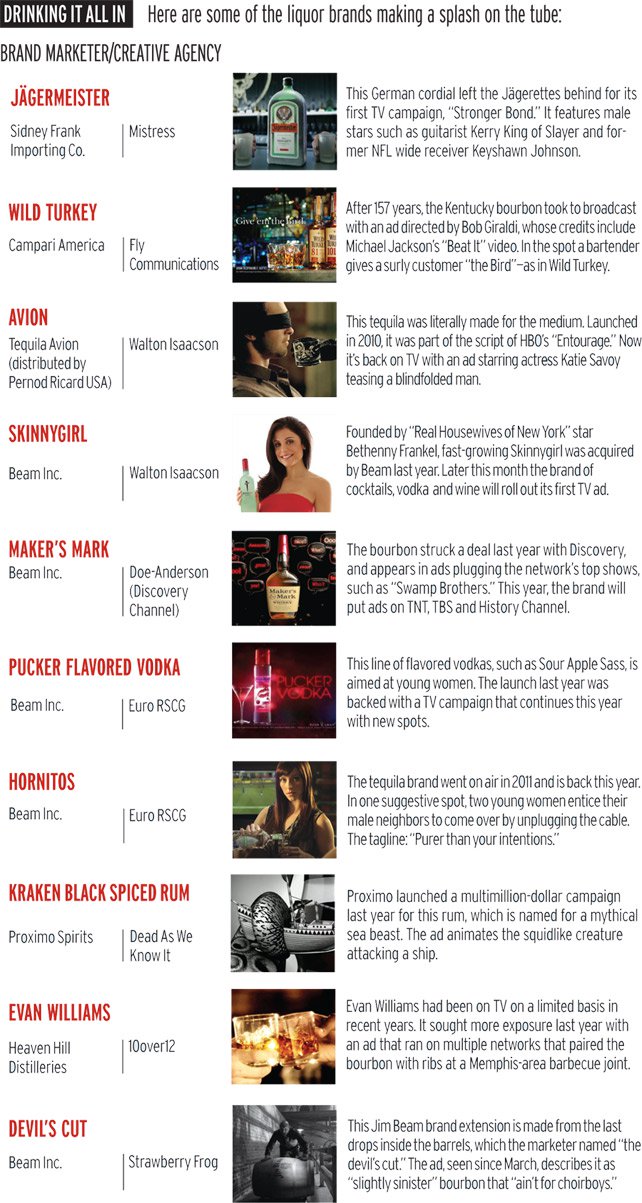