Why Your Heineken Bottle Now Has A Long Neck

Heineken is putting something new in the hands of its Man of the World: an updated bottle.

The leading man in the ongoing "Open Your World" campaign will this year will tout the "star bottle" as part of a national rollout of the brand's first major U.S. package redesign since 1946. The update, which Ad Age reported last year, replaces the brand's familiar short necks for long ones in a move that Heineken USA calls a "huge step forward in the globalization of the brand." 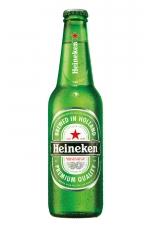 The importer's global parent in 2011 rolled out long necks almost everywhere but the U.S., where the importer initially resisted in hopes of keeping a different look from domestic brews. But the new bottle tested well, so Heineken USA changed course.

The ad doesn't exactly make the bottle the star. Rather, the spot, by Wieden & Kennedy, New York, shows a suave, worldly man pursuing women in exotic nightclubs Ho Chi Minh City, Lagos and New York, where he finally gets the girl. He orders a couple bottles as the spot closes with an image of the familiar Heineken red star appearing over text that reads "Presenting the Star Bottle."

"The bottle is featured but it's part of a larger story," said Scott Vitrone, an exec creative director at Wieden & Kennedy, New York. "I just don't think you are going to get the same kind of entertainment value or the same kind of brand presence if you have a spot where the bottle is spinning around for 60 seconds."

Still, package updates have emerged as a major marketing ploy for beer marketers of late, who are increasingly using redesigns as a way to generate news that is plugged in ads. Miller Lite, for instance, is following up last year's "punch top can" with a redesigned bottle meant exclusively for sales at bars and restaurants. Bud Light is planning to roll out a new "vented can," while Budweiser is debuting a "bow-tie" shaped can for Budweiser, playing off the well-known brand logo design.

Heineken's new bottle features an "embossed thumb groove that improves grip and encourages people to hold the bottle at a lower point, keeping the beer colder," according to a statement.

Do drinkers seriously care about this stuff?

"We've done a bunch of testing on it, [and] particularly with the younger consumer, we saw tangible positive results on things like 'modern' and 'progressive," said Heineken USA Chief Marketing Officer Lesya Lysyj.

The ad was directed by Rupert Sanders and features the song "Dance Music 1," which was composed by Rahul Dev Burman for the 1971 film "Hare Rama Hare Krishna." The spot was made for the U.S. market but will be available for other Heineken markets to use.