Jack in the Box Eliminates Toys From Kids' Meals

But Is Fast Feeders Move More of a PR Stunt?
READ THIS NEXT
Celebrating AAPI creative excellence

Jack in the Box has pulled its toys from its children's meals, earning praise from consumer advocates who claim fast feeders lure kids to unhealthy meals with trinkets. But considering that Jack in the Box rarely markets to kids, and it's a fraction of the size of , say, McDonald's, is that really much of a victory? Or was it more of a PR stunt?

Brian Luscomb, a spokesman for Jack in the Box, a chain with 2,200 locations in 19 states and about $2.9 billion in U.S. systemwide sales last year, said the company derives a "very small percentage" of its sales from kids' meals. "We've offered kids meals for a couple of decades as a convenience," he said.

He said the decision to eliminate toys from the kids' menus is not the result of increasing pressure from advocacy groups urging fast feeders to stop marketing to children. Rather, he said, the move is to focus on Jack in the Box's target : "the frequent fast-food consumer," or men aged 18 to 34. "It's been a long time since we've advertised to kids, simply because we focus on adults and not children."

He added that the move allows the chain to focus on the quality of products in the kids' meals, as opposed to promoting a toy. The marketer is also rolling out Chiquita Apple Bites With Caramel as an additional option for a side dish in combo meals aimed at kids. 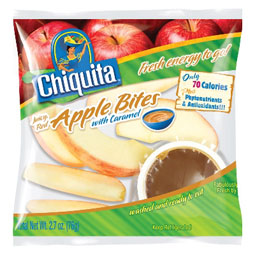 Chiquita Apple Bites With Caramel are offered in Jack in the Box kids' meals.

Consumer advocates, however, are trying to use the news as leverage with other chains. "We hope that McDonald's, Burger King, Wendy's , and Taco Bell are paying attention to Jack in the Box, which has decided to stop using toys to market fast-food meals to children," the Center for Science in the Public Interest said in a statement. "It's too bad that McDonald's, Burger King, Wendy's , and Taco Bell think they can't compete on the basis of quality, value, taste, or nutrition, but instead must resort to such a discredited marketing tactic to lure families to their businesses."

In other words, it's no skin off Jack 's back. And the move will likely not sway larger chains -- which have far more invested in kids' meals -- to eliminate toys. A spokeswoman for McDonald's said: "We remain focused on our customers and our business."

Emily Buchanan, senior VP and director-food and beverage marketing at PR agency MSL, New York, said, regarding whether other fast feeders would follow suit: "I don't see them as being that much of an influence given their size." (Publicis Gourpe's MSL Group's Atlanta office works with the local McDonald's franchisee co-op.)

Ms. Buchanan said that the move is still strategic, though. The announcement, in conjunction with the introduction of the Chiquita Apple Bites, serves as good PR for garnering "a health and quality halo effect that they wouldn't necessarily have otherwise." She added: "It would seem as if they were not talking to 18- to 34-year-olds, but rather to parents. It's a reminder to people that they have kids' menus, and P.S., 'We offer healthy options and don't offer toys.' This strikes me as a strategy to start talking to parents."

CSPI in December filed a class action lawsuit against McDonald's Corp., aimed at stopping McDonald's use of toys to market directly to children.

Chains, especially McDonald's because of its market dominance, have come under fire in recent years for marketing to children and including toys in kids' meals. Legislation passed in California's San Francisco and Santa Clara counties banning the inclusion of toys in kids' meals that do not meet specific nutritional requirements. A similar ban is now under consideration In New York, after City Councilman Leroy Comrie proposed a bill in April.

The restaurant industry has been quietly fighting back in other parts of the country. Lobbyists in Florida and Arizona successfully stifled efforts to allow local and county governments to enforce toy bans. A proposed Nebraska statewide kids' meal ban fizzled out in February, before the proposal even reached its first legislative hearing.