'I don’t think most people want to live in a world where you can only post things that tech companies judge to be 100 percent true,” says Facebook CEO
READ THIS NEXT
Quibi calls it quits, and a final presidential debate looms: Thursday Wake-Up Call 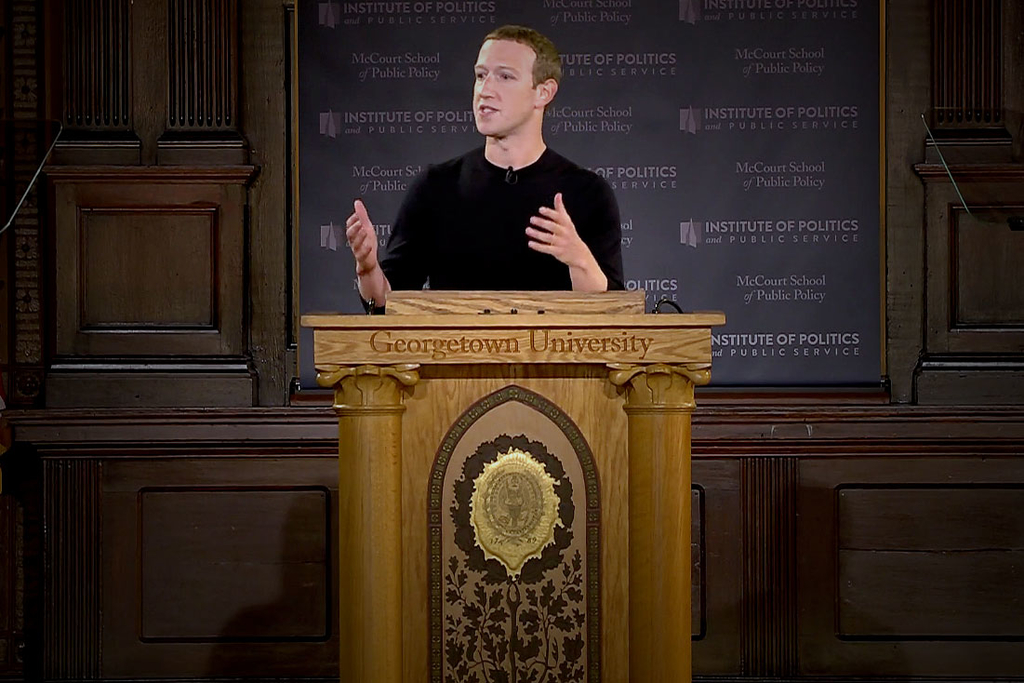 “I don’t think most people want to live in a world where you can only post things that tech companies judge to be 100 percent true,” Zuckerberg said on Thursday to an auditorium full of students at Georgetown University’s Gaston Hall in Washington. “People should be able to see for themselves what politicians are saying.”

In recent weeks, Facebook has been criticized for its policy on political ads, with the presidential campaigns of Joe Biden and Elizabeth Warren calling on the company to remove ads from U.S. President Donald Trump’s campaign that include claims with no evidence. Facebook has declined to do so, raising the larger question of whether such ads on social media should be regulated.

Zuckerberg said on Thursday that he’s considered getting rid of political ads on his platforms altogether—it’s a small part of the company’s business—but banning them would favor incumbents.

“In a democracy, I believe people should decide what’s credible, not tech companies,” Zuckerberg said.

The company doesn’t fact-check posts from politicians, including ads, to avoid the appearance that it’s taking sides. Warren took advantage of Facebook’s policy earlier this month with a series of ads claiming Zuckerberg was endorsing Donald Trump for re-election—which isn’t true. Warren, who is running for the Democratic nomination, ran the false assertion to highlight Facebook’s policy following an ad from Trump that accused fellow Democrat Joe Biden of bribing officials in Ukraine, without any proof.

Zuckerberg also warned that if technology companies and platforms like Facebook don’t fight hard to uphold free speech, the internet could one day look like it does in China. The Chinese government, he said, is building a censored version of the internet, and exporting that version through some of its most popular online services.

He called out ByteDance Inc. unit TikTok, a rival mobile social network, as one of those services, and said TikTok has censored content from the Hong Kong protests.

“Until recently, the internet in almost every country outside China has been defined by American platforms with strong free expression values,” Zuckerberg said. “There’s no guarantee these values will win out.”

Zuckerberg also used Thursday’s speech, billed as a conversation on free expression, to argue that the social network’s enormous size and scale offers people a new kind of power: the ability to share their thoughts with the masses.

Zuckerberg called this power “a fifth estate alongside the other power structures in our society.” He touted the importance of giving individuals a voice, which is where the most progress comes for social change.

Internet services like Facebook can still protect free expression while addressing problems that have been raised by this new technology, Zuckerberg said. He acknowledged that when everyone has a voice, some people will use that to try to organize violence and influence elections. At Facebook’s scale, even if a very small percentage of people try to cause harm, that’s still a lot, Zuckerberg said. The company has chosen to focus on the authenticity of the speaker rather than judging the content itself, he said.

While Facebook, as a private business, is not beholden to free-speech rules per the First Amendment, more than 2.7 billion people use its products around the world. The company’s algorithm—software that decides what people see in their feeds—and content policies have a tremendous impact on whose voices are heard.

The company’s decisions have often been controversial, putting Facebook in a constant defensive posture with many government leaders, who either think Facebook is doing too much or not enough to police its properties.

Since Russia’s election interference in 2016, Facebook has built up an apparatus of third-party fact checkers, responsible for marking a post as false, after which it might be ranked lower in the news feed, but never removed. The system, which often fails to address content until after it’s gone viral, doesn’t apply to political ads.

Facebook’s rules on what stays up and gets taken down on its social network, as well as on Instagram, Facebook Messenger and WhatsApp platforms, are applied by a global group of thousands of low-wage contractors, who manage more than 100 billion pieces of content across the digital properties daily. The results are often inconsistent, causing confusion. The company is building an independent oversight board that can be the last word on Facebook decisions that users disagree with.

Besides the content policies, Facebook has been under fire for its news feed algorithm, which tends to highlight content that triggers an emotional response in users. That means shocking news, including false information, tends to spread quickly there. Facebook has been hesitant to remove misinformation because of concerns, especially on the conservative side, about showing political bias. Zuckerberg has been meeting conservative pundits to improve the relationship, though the company has said it hasn’t found any evidence of bias.