Popeyes is running out of chicken sandwiches, and it seems happy about it: Wednesday Wake-Up Call | Ad Age
Skip to main content

Popeyes is running out of chicken sandwiches, and it seems happy about it: Wednesday Wake-Up Call

Plus, news about Peloton, Papa John's, Costco and Spotify 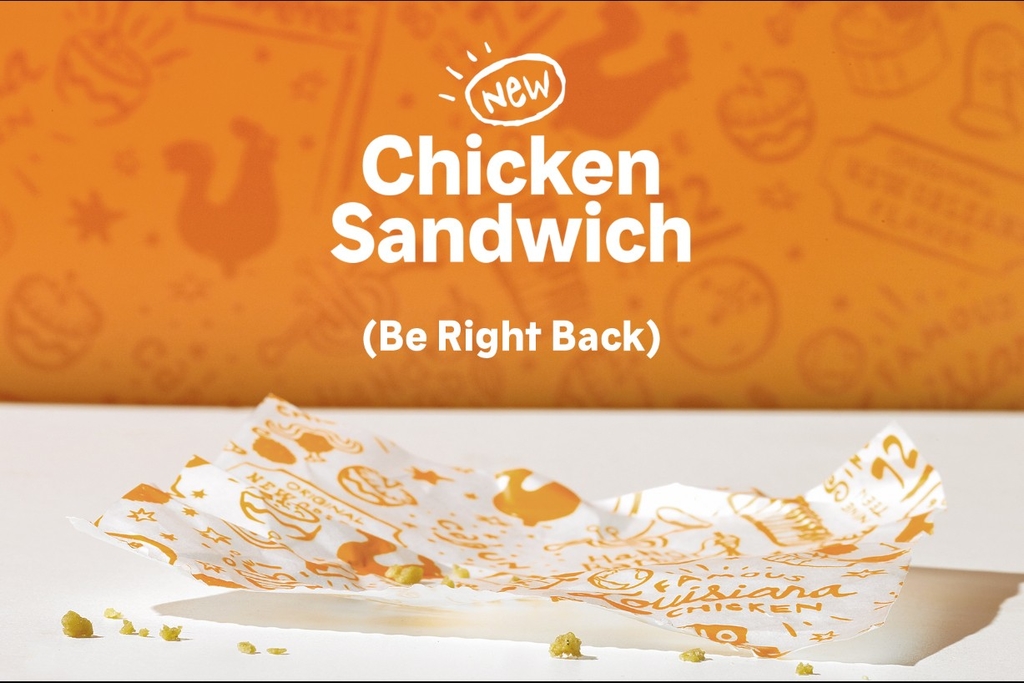 Popeyes' chicken sandwich shortage
Popeyes’ new chicken sandwich is a hit, and the brand says its restaurants across the country are expected to sell out of the item by the week’s end. It announced the shortage in a cheerful video on Twitter, where it also it showed off footage of long lines snaking around its restaurants and thanked fans for their love. “You ate ‘em all,” the copy reads. “You ate ‘em ALL. (Legit proud of you.) They’ll be back soon.” The brand, assisted by Austin agency GSD&M on creative, urged people to download its app to find out when the sandwiches will be back in stock. How clever.

When KFC suffered chicken shortages in the U.K. last year, it famously ran apology ads in which the KFC logo was replaced by “FCK.” Now that Popeyes is having its own “FCK” moment, it’s not apologizing. In fact it seems pretty proud of itself.

In other chicken sandwich-related news: Buffalo Wild Wings CMO Seth Freeman talks to Ad Age’s Jessica Wohl about a new football-related campaign—and boasts about his brand’s own chicken sandwich. (“We’ve got a great sandwich, we’ll put our sandwich up against anybody’s.”) Sign up for the Marketer’s Brief podcast on iTunes or Spotify.

A marriage of tobacco giants?
Two cigarette giants, Philip Morris International and Altria Group, split apart over a decade ago. Altria sells Marlboro and other brands in the U.S., while Philip Morris handles them in markets outside the U.S. Now they’re in talks about getting back together to face a future with fewer cigarettes. The potential is in vaping. Bloomberg News reports:

“A reunification would combine two of the most popular smoking alternative products: IQOS and Juul. Philip Morris has been plowing billions of dollars in promoting IQOS, a heat-not-burn product used by millions consumers outside the U.S.. Altria meanwhile has invested $12.8 billion in e-cigarette upstart Juul Labs Inc.”

Juul, of course, has been so successful that it’s no longer just a brand name, it’s also a verb.

‘Peloton sells happiness’
The most eye roll-worthy quote of the day comes via Peloton’s filing for its initial public offering on the Nasdaq. “On the most basic level, Peloton sells happiness,” founder John Foley wrote in the filing. “But of course, we do so much more.” In addition to selling happiness, the company also hawks $2,000-plus exercise bikes. As Vox writes, “It’s the latest example of a company stretching itself every which way in order to gin up excitement from the public market.”  In the filing, the brand casts itself as a “technology, media, software, product, experience, fitness, design, retail, apparel, logistics company.” Whew.

For some reason this reminds us of the famous “Saturday Night Live” skit about a product that’s both a floor wax and a dessert topping. Peloton: It's whatever you want it to be.

Huh: Sen. Bernie Sanders, a Democratic presidential candidate, has a plan to help journalism confront the digital advertising dominance of Google and Facebook. “We should consider taxing targeted ads and using the revenue to fund nonprofit civic-minded media,” he writes in an op-ed in the Columbia Journalism Review.

Video of the day: Costco opened its first physical location in China, but the crowds were a little too enthusiastic, and the store had to shut down hours before the planned closing. Watch customers in Shanghai clamor for good deals on laundry detergent and rotisserie chicken on CNN.com.

Ad of the day: If there’s a really good song playing in the car, you just have to sing along. Even if you’ve reached your destination and people are waiting for you. Even if there’s a valet tapping on your car window and asking you to hand over your keys. That's the premise of Spotify’s new ad, as I-Hsien Sherwood writes in Ad Age. The soundtrack, by the way, is Sia’s “Elastic Heart.”

On Sept. 9 in Manhattan, Ad Age Next: D-to-C will bring together leaders from direct-to-consumer brands including Billie, Allbirds, ThirdLove and Rockets of Awesome. Read how to sign up here.