Is Procter & Gamble Losing Its Edge?

As Challenges Mount, Critics Wonder If Doubling Down on Digital is Best Bet for Fending Off Competition
READ THIS NEXT
Celebrating AAPI creative excellence

Digital has been a hallmark of Procter & Gamble Chairman-CEO Bob McDonald's tenure, hailed as key to wringing $10 billion in overall costs and $1 billion in marketing savings out of its massive budgets in five years.

But while P&G has gotten plenty of media play lately -- social and otherwise -- over its digital ambitions, it faces growing questions about how much good digital marketing can do amid broader signs P&G is losing its edge. Some analysts and competitors question whether P&G can digitize its way out of its deeper issues, or enjoy the same scale advantages in a digital world that it had in traditional marketing.

P&G is far from collapse. It's still growing -- 4% organically on the top line -- and meeting its earnings, even if revising forecasts down recently. But for a company long seen as a world-beater, worrying indicators abound: 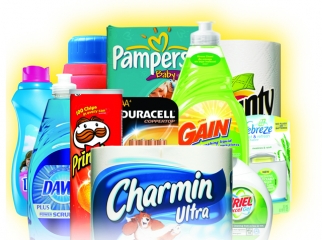 Share loss. P&G made progress last year, climbing toward the top third of its competitive set in organic sales growth and growing or holding market share in most of its categories and countries, powered by a ramp-up in marketing spending. But momentum slowed as P&G raised prices to recoup higher commodity costs, which resulted in lost market share across more than half of its business globally last quarter. Mr. McDonald has said that he expects P&G's results to improve as competitors match recent price hikes and P&G adjusts prices in places where competitors haven't increased prices.

Decreasing ad effectiveness. While P&G's Old Spice ads drew creative raves in years past, the company's broader array of advertising, according to consumer surveys by Advertising Benchmark Index in January and February, ranked in the middle of the pack or below household and personal-care peers. This was particularly true in TV and print, where P&G still spends the vast majority of its media dollars. A P&G spokeswoman said in an email that the company's research shows that "80% of our sales are supported by copy that is strong in comparison to a relevant industry database. In addition, the quality of our copy is increasing year-on-year over the past several years."

Sliding retailer ratings . Retailer ratings of P&G have slipped for four straight years in WPP's Kantar (formerly Cannondale Associates) surveys. At least P&G still leads others in that rating, whose methodology gives it an edge based on its sheer breadth of categories. A soon-to-be-released ranking by The Hub magazine shows P&G slipping to fourth in ratings by agencies in shopper-marketing excellence, behind rivals Unilever and Kimberly-Clark Corp. That's down from third in 2011. The P&G spokeswoman said the company is pleased it remains at the top of the Kantar survey, but that "we are not pleased our absolute scores have been declining."

Go-to-market issues. Hurting P&G in the eyes of retailers -- not to mention of investors and analysts -- has been its inability to fully deliver on product launches in recent years. The six-month delay of Tide Pods is the latest in a series of problems that included supply issues with Fusion ProGlide razors and Old Spice body wash. Some executives in and close to the company blame capital-spending constraints put in place after the $67 billion acquisition of Gillette in 2005.

Mr. McDonald noted in a February press briefing that P&G continues to deliver as planned on the vast majority of its product initiatives each month, even if some high-profile misses get all the attention. The P&G spokeswoman said unexpected consumer demand, not capital constraints, have mainly been responsible and that P&G has committed to ramp up capital spending in the years ahead to ensure that supply can meet demand.

Competitive woes. P&G's beauty and grooming businesses -- bolstered by $80 billion in acquisitions last decade that included Clairol and Wella -- have been a growing drag on the company's top line. After showing some positive momentum early last year, P&G the past two quarters has again slipped behind rivals L'Oreal and Unilever in top-line sales growth in personal care and is even further behind luxury and prestige player Estee Lauder.

The P&G spokeswoman said: "Clairol paid off quickly via the cost synergies we were able to deliver. Wella is a bit behind the curve. We've delivered the cost synergies, but we've lagged on the growth side of the equation."

P&G has talked increasingly about digital marketing and broader digitization as part of the solution. Mr. McDonald's plan to make P&G the most digitally savvy company around includes better use of digital tools to forecast demand and enabling innovation. One example he brought up at the Signal Conference, hosted by Federated Media at P&G headquarters earlier this month, was the use of prototyping to eliminate the "$50,000 diaper" that used to be created each time P&G developed a Pampers product. But there is a problem with digitization as a panacea for P&G: It remains relatively unproved. While the Association of National Advertisers is leading a group to identify online-ad impression standards and audience measurement that can serve as a universal currency -- similar to those of TV and magazines. 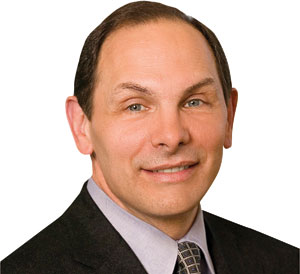 "What we're working on an industry basis is to define EGRPs [electronic gross rating points]," P&G Global Brand-Building Officer Marc Pritchard recently told The Wall Street Journal. "Once we get that , we will start to get a common platform measurement."

As P&G has looked to shift from increasingly expensive TV, its brands appear to have moved faster to an old medium: print. P&G's print outlay as a share of its $3 billion in overall measured spending shot up about four points, to 36 % last year, according to Kantar Media. It rose more than 11 points from the 25% share for print in P&G's measured spending in 2004. Measured digital spending stayed about flat, at under 6% last year.

Kantar's methodology likely inflates print spending while undercounting digital -- which doesn't include Facebook, search, some video advertising or the growing creative effort behind digital. Even so, those factors are unlikely to make up a six-to-one difference between the two in P&G's media mix.

In the Wall Street Journal interview, Mr. Pritchard said brands such as Aussie and Secret have gone "100% digital," but Kantar data show both brands getting TV and print support just last year. Secret alone got $18 million in TV, according to Kantar, and a person familiar with the situation said Secret continues to get TV support. P&G later qualified to Ad Age that some, but not all, of those brands' marketing programs are wholly digital.

Bigger P&G shifts toward digital remain largely experimental, such as recent tests in SymphonyIRI Group's BehaviorScan markets, where P&G is tracking the impact of big changes in media mix on a small-city or even household level, according to people familiar with the matter. 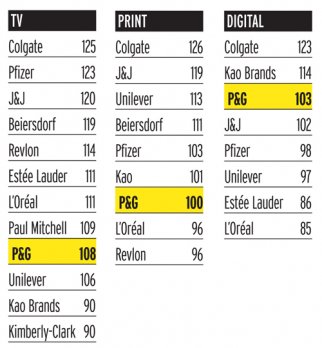 The effectiveness of P&G's ads across categories, as measured by the Advertising Benchmark Index. Average score is 100.

With help from Yahoo, P&G has implemented Hawkeye, an in-house digital-media-buying optimization system, said people familiar with the matter. But such rapid-fire optimization systems are increasingly being offered to large and small players alike, and they tend to reward nimbleness and ability to change plans quickly rather than bulk buys.

"Scale advantage is no longer limited to "bulk buys' only—although [that 's] still important," the P&G spokeswoman said. Scale now also "involves quality and amount of data, and the consumer expertise and algorithms to do that actual optimization." Overall, she said, "digital media has proven to build the business with higher-than-average ROIs, which is why digital is now a sizable part of every brand's media mix."

But while P&G has been talking more about building digital capabilities, so have competitors Unilever, L'Oreal, Estee Lauder and others, which are forging their own partnerships with Facebook and Google, ramping up digital training and building out digital-agency rosters and exclusive content.

In fact, rivals are likely to match, at least proportionately, the $1 billion in marketing efficiencies in five years that P&G anticipates from more use of digital media, said Sanford C. Bernstein analyst Ali Dibadj. While P&G has said its cost cuts will include marketing -- and marketing growth will be held below the pace of sales growth -- analysts aren't so sure it will resist pouring it back into marketing. "We have a hard time seeing how greater savings won't enable [P&G to reinvest] to more aggressively pursue market-share expansion," said Morgan Stanley analyst Dara Mohsenian.

Mr. Dibadj said that P&G's projections account for only taking about a quarter of its $10 billion five-year cost savings to the bottom line, with the rest to be reinvested. "On the record, they'll tell you marketing spend on average will be down [as a share of sales by 0.1 to 0.15 percentage points the next five years] because they can get more efficient," Mr. Dibadj said. "I'm doubtful how much more efficient you can get in that period of time, particularly as your competitors are increasing their advertising spend. So while they haven't said where they're going to invest, and they've said marketing won't be part of it, I would argue that 's part of what they have to do to maintain these brands."

It doesn't take a long memory to recall the last time P&G started talking about media efficiency -- late 2008, near the beginning of the financial crisis and end of former Chairman-CEO A.G. Lafley's tenure. And the results weren't good: When P&G cut ad spending in 2009 (even if impression counts were maintained as P&G contended) market shares began to suffer. In response, P&G under Mr. McDonald began ramping up marketing spending and regained some of that share by 2010, leading to P&G's record spending of $9.3 billion for the fiscal year ended June 30.

While P&G's broader cost-cutting plan was well received by investors -- the stock has jumped 5% since the announcement last month -- stock of such competitors as L'Oreal, Colgate-Palmolive Co.and Kimberly-Clark Corp. rose 3% to 4% over the same time period. Translation: Investors don't appear to expect them to suffer much from P&G's newfound strength -- digital or otherwise.

"There's no question Procter used to be miles ahead of their competitors, whether it be by geography or category," Mr. Dibadj said. "And now the competitors, particularly in this past half decade or so of Procter not executing well, they've caught up."

"Procter can get better," Mr. Dibadj said. But the question is whether it can maintain its leadership status.

In fact, L'Oreal, Unilever and package-goods marketer Henkel -- maker of brands such as Purex and Dial -- are now seen as more of a threat, said an executive for a P&G rival. "People aren't afraid of P&G anymore," he said.